The latest from the markets this morning. 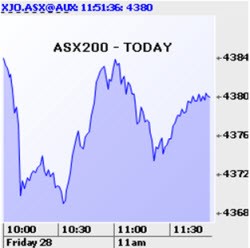 The market is down 3. SFE Futures were up 2 this morning.

Dow Jones up 72. The Dow was up 109 at best. The Dow was up all day on the back of local economic data, the Spanish government handing down a budget with spending cuts of 39 billion euros and on news that the Chinese central bank will inject a record $57.92 billion into their financial system (ahead of their upcoming Golden Week holiday). The risk trade was back on in the US with utilities stocks down, metals up and gold up to a seven month high.

Spain’s 2013 budget saw the government pledge themselves to meet Madrid’s public deficit targets and comply with the EU (seen as positive) despite unemployment of around 25% and high interest payments on the country’s debt. Only pensioners were spared on the list of announced cuts designed to ensure Spain meets the commitment of the European Union to get the country’s deficit under control. “It is a budget for a period of crisis, but aimed at getting out of this crisis,” said Deputy Prime Minister Soraya Saenz de Santamaria. Spain hopes to slash the deficit from 8.9% to 6.3% this year, 4.5% in 2013 and 2.8% in 2014. “It is a major commitment to reducing the public deficit but also oriented towards economic growth and creating employment” said Budget Minister Cristobal Montoro. The focus is on spending cuts, the government said, but retirement pensions are expected to go up by 1%, sticking to a pre-election promise of Prime Minister Mariano Rajoy’s government.

For a five-day free trial of the MARCUS TODAY newsletter click here. You will receive our renowned and popular daily email about the sharemarket with all the stuff you need to know ahead of the trading day including:

Subscribe to MARCUS TODAY. We are sure you will enjoy and profit from what we offer … we have one of the highest re-subscription rates in the financial newsletter industry.