Legal lady. Gina Rinehart doesn’t like journalists. She’s already chasing hacks at The West Australian to reveal their sources. Now we hear she’s taken exception to media coverage of the legal case involving her and three of her four children. At least one media outlet is under the gun, although it seems that legal action is not on the cards at present. Know more? Drop us a line here.

Buy my rival! Age subscribers in the Melbourne burb of Brunswick were shocked this morning to discover that their paper contained glossy inserts urging them to subscribe to bitter rival the Herald Sun. Newsagent stuff-up or something more sinister?

#AskTony. Tony Abbott’s short Q and A session on Twitter yesterday was so popular that its hash tag #AskTony trended nationally for a time. Unfortunately the Opposition Leader had to exercise his discretion and couldn’t address hard-hitting questions such as these: 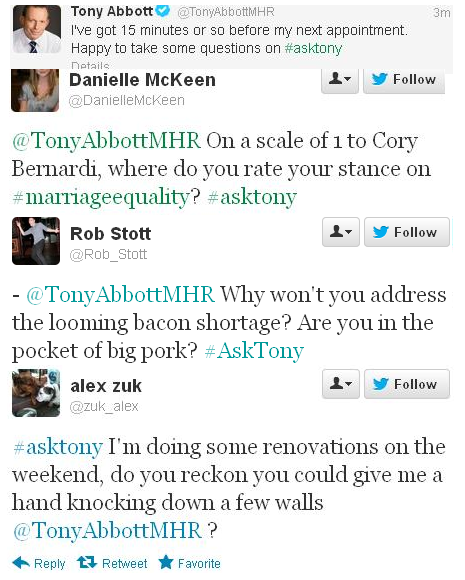 Does Defence need a diet? There’s robust debate around whether the Defence department is cash-strapped or bloated — see the story on 127 bureaucrats attending an HR conference in Crikey today, and Tips yesterday. This army reservist thinks there’s money to burn:

“Having worked in state and federal public service and being a current army reservist, I can without a doubt say the army reserve has lots of fat to trim. Army Reserve Training days (ART days) are often wasted by poorly planned activities, and stores such as ammunition and ‘expense items’ are misused or simple thrown away to save on paperwork. At present the spending cuts from the Reserve side of the fence are coming from ART days as other spending (fuel ammunition, etc) has already been purchased and the cost of dishonouring supply contracts far outweighs the potential savings in the financial year.”

But another insider reckons it’s not all beer and skittles at Russell, and has defended the holding of a conference in Perth recently:

“It’s impossible to say Defence is cash-strapped or not, because it entirely depends on where. It’s very localised — you might not be able to go to a conference because of money, but someone in the same branch but different project around the corner might have no trouble. I had to get other areas of Defence to pay for my travel on a number of occasions because they had money, but we did not. Goodness knows where the budgets come from and who decides them. As for the conference being in Perth — well there is a bit going on over there with Defence, and remember the states would get pretty stroppy if everything was held in Canberra to save on a few air fares.”

“As for the conference being in Perth — well there is a bit going on over there with Defence, and remember the states would get pretty stroppy if everything was held in Canberra to save on a few air fares.”

If that is an adequate excuse for waste on a grand scale, I stand corrected.

By the way, since when do defence activities get rationed on a geographic scale? Isn’t that somewhat akin to shooting a set percentage of ammunition out to sea from Sydney Heads because an aggressor is approaching Kwinana, on the basis that states must contribute equally?

@ John Bennetts While it is costly, it allows people from Perth who would not be going to the conference normally to meet informally with their colleagues from other states. By rotating the conference through different states many more defence staff get to meet than woyuld otherwise be able to. A cost benefit analysis would be needed to decide whether it is “waste on a grand scale” or not.

Matt, you are clearly terminally confused as to the purpose of conferences.

They are about spreading information and resolving issues.

They should not include as a goal partying. That may well be an adjunct activity, however socialising/partying is a long way from being an economic driver for conferences.

If you truly believe that parties are the purpose of our armed services, why not just come out and say so in as many words?

As to your hiding behind a non-existent cost-benefit analysis…. pffft!