Booksellers sceptical about JK and the Chamber of Secrets

Only one Australian reviewer has read JK Rowling’s first book for adults, which goes on sale at 5pm today. The secrecy around The Casual Vacancy is a Harry Potter-like mystery. 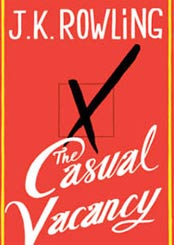 Jennifer Byrne, whose exclusive chat with JK Rowling screens on ABC1 tonight, is the only reviewer in Australia to have read her new novel The Casual Vacancy ahead of its worldwide release this afternoon.

No copy was allowed to be sent to Australia. Byrne had to fly to London and sit in the offices of Little Brown, Rowling’s publisher, every day to read the book. She was banned from even taking the book back to her hotel to read.

“They were very charming and they would make a cup of coffee and take me to a room with a view over the Thames and there I would sit. It took about three and a half days to finish,” she told Crikey.

Rowling’s first non-Harry Potter book, and the first aimed at adults, is a gritty contemporary novel about a local council election in a English town, covering Muggle issues of public housing, poverty and abuse. The UK Telegraph‘s Allison Pearson — one of a handful of reviewers who’ve read it after signing hefty legal contracts — calls the ending “so howlingly bleak that it makes Thomas Hardy look like PG Wodehouse”.

At 5pm AEST today — 8am in London, 3am in New York, 11am in St Petersburg — the book goes on sale. It’s all about creating “a moment”, says Matt Hoy, the sales and marketing manager at Hachette Australia, the book’s Australian publishers.

“Just like the public globally expect music and film and television to be simultaneous to them in all territories at the same time, we strive to do that with books as well,” said Hoy.

Yet several independent booksellers tell Crikey the secrecy and hype is unlikely to translate into sales, and in fact may hinder them.

Despite the hoopla — boxes must be kept in a safe position, no box may be opened until 5pm AEST, forms must be signed guaranteeing an embargo will not be broken — it was just a standard delivery van dropping off the boxes of books to Australian bookstores yesterday afternoon. “No armed guards, no fanfare, just a normal delivery,” said bookseller and co-owner at Adelaide’s Imprints Booksellers, Jason Lake.

Creating a moment is hard when people know nothing about it. “You’re buying these things blind,” said Lake. “It might be fabulous, it might be a dog.”

Lake says if he had an opportunity to read the book in advance, and loved it, he would happily spruik it to customers. But “as a small independent, I can’t really afford to sink valuable dollars into something that may not work for me”.

Fiona Stager, co-owner of Brisbane’s Avid Reader, agrees. “I want to know what a book is like, to a certain extent, before I can commit to huge numbers and put my hand on my heart and tell readers this is a good book,” she told Crikey.

Reading advance copies of books is what determines Avid Reader’s Book of the Month and whether the shop chooses to actively promote it. In the case of The Casual Vacancy, Avid Reader will update its website and social media, but no other events are planned.

It’s a similar issue for Sydney’s Abbey’s Bookshop, says store manager David Hall. “We didnt go very big on it,” said Hall. “We just weren’t sure how it was going to go. No one could see it beforehand, so it makes it hard.”

Discounting by K-Mart, Big W and the like — the book retails for $39.95 — has a big impact on sales. “The market share of this book is probably going to be modest [for independent bookstores]”, said Martin Shaw, the books division manager at Melbourne’s Readings. Plus, secrecy doesn’t work quite as well for an adult market: “It’s not quite the sense of high drama that perhaps it was in the past with her or other authors.”

Canberra’s Paperchain Bookstore organised a steam train ride when the last Harry Potter came out, with the kids getting handed the book on board. “We couldn’t work out what to do with this one,” said manager Steve Belton. “Kids will come to most things but adults won’t normally come along to a party.”
Belton echoed other booksellers who spoke of their relief of books at least appearing in the media in a positive light, even if they haven’t been able to read it yet.

But despite the hoops she had to climb through to read The Casual Vacancy, Byrne backs the tough embargo restrictions. “It’s really tough for booksellers, particularly for conscientious ones who do like to know a product and have a good relationship with the customers, I can absolutely understand the frustration,” she said.

“But I think the reasons are bigger than that, which is that frankly it would be up on the net and people would be getting bastardised versions … I don’t think its about selling more copies. It’s about readers having a chance to judge it for themselves. Because it’s not going to sell more copies for the secrecy.”

Trump won’t need his own library. His presidency is giving publishers plenty already

HP wasn’t to my taste but, like the execrable “Da Vinci Crapola’ at least it got non readers to struggle with books, those ancient, solar powered, random access, data storage units.
For that, well done JK and I hope that the new one is equally successful. Better than unlord perjurer Archer and the rest of the huge selling mcbook scribblers.
I just hope that it’s not a huge disappointment like Sue “Adrian Mole” Townsend’s “Rebuilding Coventry”.

Is some part of the reason for the VERY late delivery of Crikey this evening, as against 1:30pm AEST, the content of this bit of cr_p?

I couldn’t give a hoot about JKR or her excreta/novels. I do care about Australia’s dwindling retail book market. And I want my Crikey as and when it is due, without opaque apologies for non-performance.

Totally with you, yet again, AR, respect. Bennets! Hold your breath for that entitlement cr-p. Ensure close family are on hand to clear the pathetic mess, not some overworked Paramedic. Hein ?

Ambiguity in choice of industry: arts/advertising/media vs arts/entertainment. (That’s from memory as I can’t see the list now.)