Sentia Media index: it’s a Wong way to the top

Penny Wong and a ghost of Labor's past rocketed up the Sentia Media index this week. But the Prime Minister's New York swing -- and her replacement due to illness -- topped the charts.

In delivering the budget outcome, Treasurer Wayne Swan returned to his oft-inhabited third spot for overall media coverage this week, warning of further write-downs in government revenue due to ongoing GFC fallout and a drop in commodity prices.

By his side at the lectern was Finance Minister Penny Wong, who surged into our top 20 for the first time in well over a month. That may surprise some, but it took the dual impact of a significant budget announcement and the voting down of the same-s-x marriage bill — where all eyes were on the gay MP — to place Wong high among politicians making media waves.

Wong’s predecessor, Lindsay Tanner, made waves simply by repeating that Kevin Rudd’s sacking as leader was unjustified, and the Labor Party has lost its way.

That brings us to PM Julia Gillard, who tops our chart from New York where she’s lobbying the UN with Foreign Minister Bob Carr. Tanner’s contempt for Gillard is well documented, and while Carr showed his consummate media skills in dismissing Tanner as one the “galahs in the pet shops”, his response that “it is getting a little too easy to bag the Labor Party” seems fair. Some would point out that Tanner was himself in Rudd’s “Gang of four” and did little to address caucus concerns about his leader’s style.

So when Workplace Relations Minister Bill Shorten went north on our list delivering the annual Ben Chifley Oration where he assured the Labor faithful that with conviction they can win the next election, one presumes he meant they can win, despite themselves. 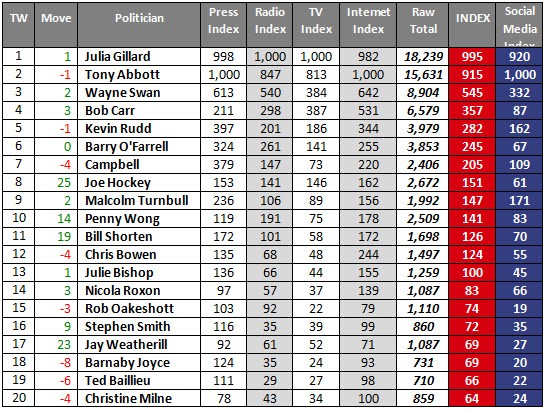 With the US election looming and the presidential debates kicking off next week, the Republicans’ near certain loss will bring new meaning to the term Mitt-igating circumstances.

Gillard will win, but margin is key