Thanks to Keating and Costello ... Gillard on the bland side ... The International Monetary Fund ... A closer look at deep space ...

Thank you, Paul. And a nod of appreciation for Peter too. Paul Keating as treasurer in 1990 originally gave us six pillars — the four biggest banks and two insurance companies. Some seven years later, treasurer Peter Costello set the insurers free but kept the policy of banning mergers of the big banks. And the wisdom of those decisions, much criticised at the time as being anti-competitive, the International Monetary Fund now tells us, became apparent during the just-gone international financial crisis.

In a report released overnight, the IMF looks at why Australia, Canada, India, and Malaysia, countries with a relatively low degree of exposure to international banking, all also avoided the worst of the effects of the global financial crisis.

Regulatory policies in Australia and Canada share some features that might have resulted in less globally integrated banking systems. One important policy they have in common is the de facto prohibition of mergers among the major domestic banks.

While its primary objective is to retain competition, the prohibition has prevented an increase in the size of these banks and the creation of national “champions” that could compete with major global financial institutions. This may have been a factor limiting their banks’ international activities. The two economies also impose restrictions on shareholder ownership, which limits acquisition of domestic banks by either other domestic banks or foreign ones, although establishment of subsidiaries and branches of foreign banks are not restricted, except on prudential grounds.

In Canada, a “widely held rule” prohibits a single shareholder, domestic or foreign, from owning more than 20 per cent of voting rights in a big bank. In Australia, share purchases of a bank, domestic or foreign, exceeding 15 per cent of its voting rights require special approval under a process in which the authorities consider their ability to meet prudential requirements, the implications of foreign ownership, and the impact on competition.

“I can be very clear about the government’s purpose.

“The government’s purpose is to keep the economy strong, to make sure that not only today, but tomorrow, Australians have got the best of opportunities and we maximise our prosperity as our region changes, and then we find a way to share that, that is fair and meets the needs of the Australian people.”

With blandness like that, Tony Abbott could only say hear hear.

The Dunning-Kreuger effect. My enjoyable daily read of Paul Krugman’s blog sent me clicking to Wikipedia this morning so I could fully understand the reference that some of what Republican vice-presidential candidate Paul Ryan says “suggests the Dunning-Kruger effect at work”. And there I discovered a definition that should be a great help to all of us covering politics.

The Dunning-Kruger effect is a cognitive bias in which unskilled individuals suffer from illusory superiority, mistakenly rating their ability much higher than average. This bias is attributed to a metacognitive inability of the unskilled to recognise their mistakes.

Although the Dunning-Kruger effect was put forward in 1999, David Dunning and Justin Kruger have quoted Charles Darwin (“Ignorance more frequently begets confidence than does knowledge” and Bertrand Russell (“One of the painful things about our time is that those who feel certainty are stupid, and those with any imagination and understanding are filled with doubt and indecision”) as authors who have recognised the phenomenon.

The IMF report says its analysis shows that banking systems less reliant on foreign funding — economies whose bank assets were relatively less funded with international liabilities in 2007 — had higher credit growth in the five years since the crisis. All four economies it reviewed followed the pattern of other peer groups on average, especially Australia and Malaysia. Other evidence, it said, “suggests that having a strong domestic deposit base is important for supporting local lending by foreign banks Hence, the positive experience of these four economies could be attributable not only to their regulatory approaches but also to the funding structure of the banks.”

Looking deep into the universe. NASA astronomers have assembled a new, improved portrait of mankind’s deepest-ever view of the universe. Called the eXtreme Deep Field, or XDF, the photo was assembled by combining 10 years of NASA Hubble Space Telescope photographs taken of a patch of sky at the centre of the original Hubble Ultra Deep Field. 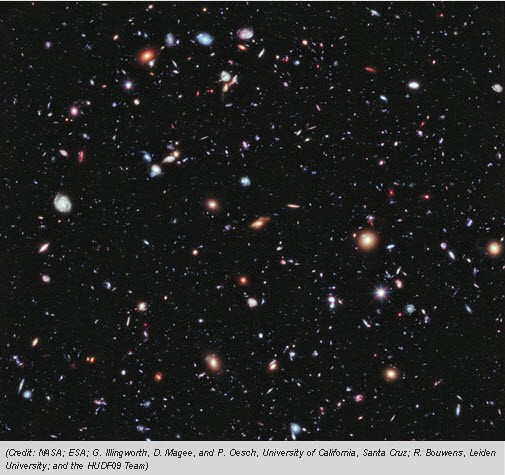 What is with the constant bagging of the Prime Minister?