Radio National cuts staff, programs. ABC Radio National will lose seven programs and 11 staff in a cost-cutting overhaul designed to save $1 million from the station’s budget. As foreshadowed by Crikey on Monday, radio drama program Airplay is getting axed. Other programs to get the chop from the draft 2013 schedule are MovieTime, The Book Reading, Sunday Story, Creative Instinct, Lingua Franca and The Night Air. In an email to all […]

Radio National cuts staff, programs. ABC Radio National will lose seven programs and 11 staff in a cost-cutting overhaul designed to save $1 million from the station’s budget. As foreshadowed by Crikey on Monday, radio drama program Airplay is getting axed. Other programs to get the chop from the draft 2013 schedule are MovieTime, The Book Reading, Sunday Story, Creative Instinct, Lingua Franca and The Night Air.

In an email to all staff sent on Tuesday afternoon, RN manager Michael Mason said: “Radio plays and book readings have, for many years, faced declining audience numbers, while remaining an expensive activity for the network. We continue to believe very strongly that ratings are not the only measure for RN, but the decline in listenership does indicate a lack of engagement in radio plays amongst our audience.”

Mason told Crikey yesterday that 11 jobs are expected to be made redundant: five from the drama department, three from features, two from operations and one from administration. He says the station will continue to promote creative audio storytelling, but in more experimental ways than traditional radio dramas.

Mason’s email, detailing the recommendations of the six-month long Production Sustainability Project, also outlines changes to make staffing levels more equitable across different programs. Producers for feature programs such as 360Documentaries and Into the Music will be expected to make more programs and to do so in less time. While acknowledging the targets set for feature producers are “contentious”, Mason said: “We simply cannot continue to produce three documentary programs on the current production schedule as budgetary pressures continue to grow.” — Matthew Knott

Terry Moran and The Thick of It writer. There’s an excellent article by former DPMC head Terry Moran in today’s Australian Financial Review getting stuck into political hacks for a lack of accountability. But Terry (or the paper) probably should have disclosed he was once a political staffer himself, working for Whitlam government health minister Doug Everingham and later for John Cain before ascending to the upper echelons of the APS via Queensland and Victoria.

Still, Moran does note that his Institute of Public Administration Australia amazingly managed to secure the services of Alan Partridge/The Thick of It/Veep superstar Armando Iannucci at its conference last week in which he bagged Bill Shorten and said that Blair trade minister Peter Mandelson once thought Partridge was a real person. 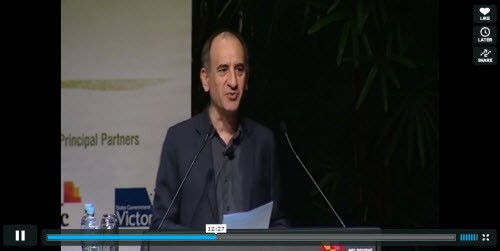 In The Fin, Moran says public service outsourcing is a positive but he might revise his assessment after consulting this classic Iannucci clip on management consultants. — Andrew Crook

Department of Corrections. An absolute classic from American Vogue. Wonder how that went down in Washington … 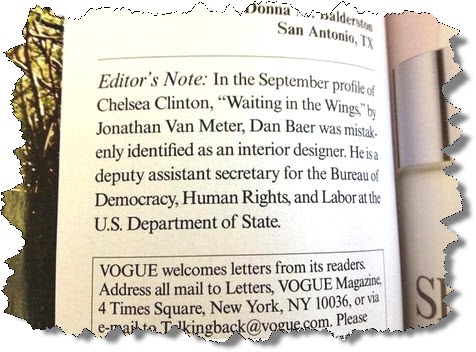 Front page of the day. Spanish demonstrators took to the streets overnight to attack governments on several fronts over the latest austerity moves. The New York Times‘ international edition captured the march before its deadline … 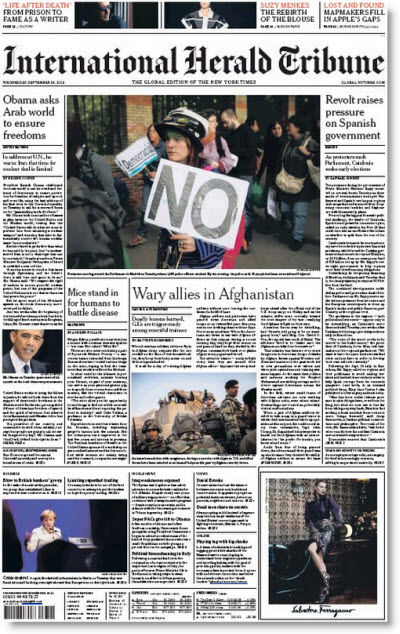 “Last night the group agreed to approve the $525 million from the sale of its Australian Consolidated Press (ACP) magazines division to Germany’s Bauer Media group. That’s enough to buy some time — probably a month — before the next tranche of Nine’s debt, estimated at $2.2 billion, is due in February.” — The Sydney Morning Herald

Rinehart won’t push out Corbett … yet

“Fairfax Media has confirmed its largest shareholder, Gina Rinehart, has not put forward any motion against the board or chairman Roger Corbett.” — The Australian

BBC sorry for reporting what the Queen said

“BBC bosses yesterday made an extraordinary public apology to the Queen after revealing her distress at the authorities’ lack of action against Abu Hamza for ‘denigrating’ her country.” — Daily Mail

Conflict of interest in hacking case

“The high court judge presiding over 155 civil damages claims for alleged phone hacking being brought against News of the World’s publisher has disclosed that one of his relatives is among the fresh cases.” — The Guardian