It was Gunns' greed-at-all-costs attitude that destroyed its public reputation and ensured its financial demise, according to Richard Flanagan. The company and its planned pulp mill had gone rogue. 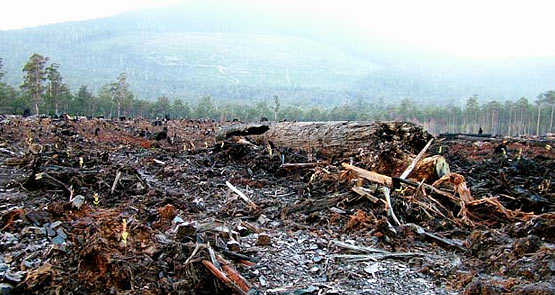 The story of Gunns is a parable of corporate hubris. You can, as they did, corrupt the polity, cow the media, poison public life and seek to persecute those who disagree with you. You can r-pe the land, exterminate protected species, exploit your workers and you can even poison your neighbours.

But the naked pursuit of greed at all costs will in the end destroy your public legitimacy and thus ensure your doom. Gunns was a rogue corporation and its death was a chronicle long ago foretold. The sadness is in the legacy they leave to Tasmania — the immense damage to its people, its wildlands, and its economy.

Opposition to Gunns long ago outgrew any conservation group and Gunns was in the end undone by the many, many people who refused to give in to its threats, lies and intimidation. It was the small victories of the little people that ended up delaying the project until it disappeared into the fantastical realms of commercial impossibility.

Yet for a decade the only policy either major party has had has been Gunns and Gunns’ pulp mill. The former premier Jim Bacon, near his death, confessed to Peter Cundall that “the forestry industry were too strong” for him to take on. Of the latter, Premier Lara Giddings observed not so long ago that “the pulp mill was no longer the icing on the cake for Tasmania, but the cake itself”.

In consequence of this non-policy, the prosperous years of the early 2000s, when Tasmania should have been reinventing itself to ensure it had a prosperous future, were instead lost as government identified state interest as Gunns’ profit margins. The Tasmanian government mortgaged the island’s future to Gunns and squandered the good years pursuing the chimera of the pulp mill. The result is the wretched economy and impoverished society that is Tasmania today.

It appeared foolish for Premier Giddings to seek to keep the myth of the pulp mill alive in her statement to Parliament yesterday. These comments offer only false comfort to the mill’s supporters and uncertainty to its opponents. Yet the mill is dead — legally in limbo, socially unacceptable, politically impossible, and commercially fantastical. Its end ought to mark the possibility of a new beginning for Tasmania when the state can seek to address its many problems with many solutions free of the bitter divisions Gunns promoted and prospered from. The death of the mill should be a source of hope, not despair.

There was always about Gunns a distinctly personal and political flavour that sometimes smacked more of vendetta than of sound commerce. The demise of Gunns brings to an end a tumultous three decades of Tasmanian history that began with Robin Gray losing the Franklin Dam battle to the Bob Brown-led environmental movement in 1983, continued with Robin Gray losing  the Wesley Vale pulp mill battle and government to a Labor-Green government in 1989, and now the loss of Gunns and Gray’s third white elephant, the Gunns pulp mill.

In each case, the same arguments were run and shown to be nonsense; in each case the island changed regardless. It’s time now we began to honour those changes and seek to build on them, rather than repeat the mistake of searching for the one great project solution and the social conflict their political carriage inevitably demands. Let us hope the days of the cargo cult are over.

Whatever happens next, yesterday was in its way as historic a day as that of the High Court decision in July 1983 that ensured the Franklin River would not be dammed. Australian corporations will in the future ignore public sentiment at their peril.

A great darkness has lifted from Tasmania. The last remnants of the fear that so pervaded and paralysed Tasmanian life are now gone.  But whether Tasmanians have the courage, the wit and the passion to seize the great opportunities that now present themselves remains an open question.

*This article was originally published at Tasmanian Times

Tasmania is under the pump at the moment.
When Gunns closes down, it just means Tasmanian workers will move to forrestry industries in Victoria and WA, taking their younger families (and their economic activity) with them. All that will be left in Tasmainia will be it’s fishing industry (as long as no more super trawlers rock up of course) and it’s band of grey nomads (who don’t spend a lot and require a lot of health care expenditure)
Not exactly sustainable. As they say, be careful what you wish for.

Yep, if you go back to around 1996 the greenies were predicting this kind of result for woodchipping nationally based on the economics of global woodchip supply and local plantation economics. Still state and federal governments poured in the taxpayer cash to the industry,as they continue to do. As it turns out the vast bulk of media and so called ‘realist’ economic pundits were wrong and the greenies economic analysis was right. Though you probably won’t find much acknowledgement of that in the post match analysis. In the meantime the rogue agency Forestry Tasmania, seemingly protected by the human shields of the Labor and Liberal party from any kind of economic realism, continues to squander hundreds of millions of dollars in taxpayers money propping up a socialised “industry” that can’t even employ 1% of Tasmanian’s and has to trash huge tracts of remaining native forests, worth more standing that woodchipped, for the privilege. You couldn’t make it up.

For a long time it was said there was a need to keep cutting forests under the guise of sustainable logging to create and keep timber industry jobs. Timber industry jobs in the last 30 years, for what?… WOODCHIPS the lowest form of value adding to using a valuable resource. We sold it cheap to foreign entities instead of milling the same valuable resource for TIMBER products… yes value adding timber for building, furniture and other wood products as we were doing before WOODCHIPS. Now Gunns the great forest destroyers are gone, as are the jobs and sadly…as is much of the old growth forests with marginal amounts of timber left for timber mills and their traditional products. For people who were employed by Gunns life goes on albeit in a different direction and they are still around. As for the old growth forest, we can only now imagine what was there… and never to see it again.

I was non-plussed by Giddings’ remarks. Everybody but Giddings can see the emperor has no clothes. It’s uplifting to witness Gunns receive their just reward.

Back on the mainland the clock has now begun ticking for the coal seam gas cowboys.