The high-earners at the Australian Tax Office ... the online campaign to bring back Cory Bernardi ... the royal behind on show in Brisbane ... QUT elections turn ugly ... Campbell Newman's charm offensive ...

Not a taxing time. The ATO is keen to catch out high-earners who are shortchanging the public purse, but perhaps they should look closer to home to save money. A PR insider reckons “most of the ATO’s senior HR cohort” is heading to next week’s HRIZON Human Resource Congress in Melbourne — where registration costs more than $2000 a pop (plus hundreds more to attend workshops). Don’t forget accommodation and travel costs. There’s an app where you can see who’s attending, and our mole claims there’s more than 30 going from the ATO — which would cost the taxpayer a cool $100,000. Our mole had this to say:

“My agency is so strapped for cash there’s no way we could afford to send anyone along (plus our assessment was that this one wasn’t really likely to improve how we do our business, so wasn’t a good investment of our limited training budget). And when we do send someone to those sorts of conferences, we send one person, who then comes back and presents to everyone else (some of us in the public service do still take how we spend taxpayers’ money seriously). I’d be curious to see how many of those participants are going to the gala dinner, which is basically a big party. Not sure that’s where I’d like to see my taxes being used.”

The ATO told us 30 senior tax officers were registered to attend the conference, at a cost of $58,286 for registration (that doesn’t include flights and accommodation — we’re trying to find out the total cost). The spokeswoman told us:

“HR best practice is a critical part of our business. Conferences such as this provide our HR managers with insights to national and international trends in HR practices. This is a premier conference for HR practitioners and a unique opportunity to hear about topical issues such as sustainability and innovation, and ensure we maintain a contemporary work environment.”

More on Cory. The Cory Bernardi/bestiality tale is a story that keeps on giving. Cory fans have set up a website, petition and a Facebook page (more than 450 likes, but most comments are anti-Cory) to rally support for the big man. A tipster who signed the petition reckons they got an email in response giving them the names, email and postal addresses of others who’ve signed on. “Not so clever,” our Bernardi aficionado writes. “Appears to only be a handful of the results that appear — or maybe there are only a dozen supporters for Cory.”

Intrigued, Tips signed the petition — under the name John Barking — but we haven’t yet received the details of other signees. We’ll keep you posted. You can watch a clip from Cory’s personal TV station here. We’ll leave you with this image from the Facebook page (we’re not quite sure how this helps the campaign to “fight for the traditional values” of Bernardi, but then we’re not in the heads of his supporters):

Royal derriere. Some eagle-eyed media watchers may have seen fleeting TV footage of Princess Kate’s dress flying up when she landed in Brisbane earlier this week — revealing a hint of the royal derriere. We caught a brief eyeful on ABC News as the airport gusts caught Kate’s lightweight floral frock, but the images didn’t seem to be widely used (an example of media restraint can be seen here). Sensitivity over photos of Kate’s breasts being published in Europe, perhaps? 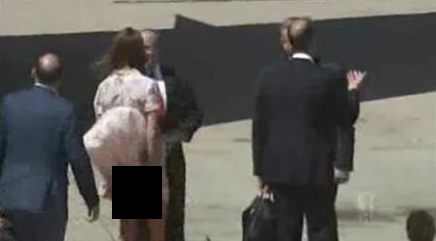 Is it correct that, as a tipster claims, QUT journalism students filming at the scene captured the moment, but “the upper echelons of  the university put the kibosh on broadcasting, and in doing so have  reneged on their sharing arrangements with Ten and Seven”? If so, good on the uni chiefs for giving Kate a break. Most women have been caught out by windy conditions — and we don’t look as good as Kate.

Newman visits the troops. Queensland Premier Campbell Newman spent two hours on Tuesday visiting public servants to boost morale following extensive sackings. Were you on the receiving end of the Campbell charm? We’ve love to know what he said and how he was received — drop us a line, and you can stay anonymous.

QUT elections turn ugly after two arrests. High drama at the Queensland University of Technology this morning after two left-wing activists were cuffed and arrested by the plod following complaints from their “Epic” Tory rivals in a “shadow of the Bjelke-Petersen era”, according to campaigners. This morning, before polling even opened, tension was simmering as a woman who is an opposition campaigner was apparently punched in the back of the head by another candidate. The QUT guild maintains close links with the University of Queensland’s “Fresh” grouping — which Crikey recently revealed had changed regulations to frustrate their rivals. The Secretary of the UQ Union this year is the Chair of its Guild Council. 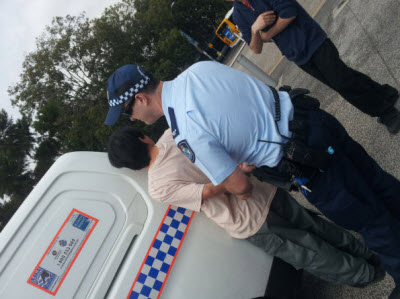 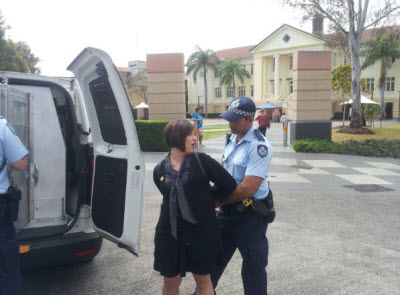 The effect of the Brisbane breeze in revealing (?) the royal bottom led 10’s 5pm news in Qld on that particular day. The ‘almost expose’ being the whole point of their story.

One thing I miss, as a lapsed Catholic, is penance. I find watching Channel 10’s news and ‘The Bolt Report’ an appropriate punishment for my sins.

The ATO junket should be a real eye-opener. I had a look at the APP and there are some interesting topics on the agenda. In the light of the ATO whistleblower bullying story I wonder whether ATO staff will be leading the discussion on these topics;

1. If succession planning and talent management really work, how come the wrong people so often get to the top?

So Kate has breasts and now a bottom…pretty soon we’ll have a real princess!

Constructing a real Cory will be a lot harder.

Executive Level staff at the ATO have as part of their remuneration agreement a set amount of money to spend on self education, check for yourself on the ato.gov.au website link: http://www.ato.gov.au/careers/content.aspx?menuid=0&doc=/content/00276686.htm&page=164&H164. Most use it for keeping their membership of professional organisations like CPA and the required courses for that registration. HR staff would be required to use their own funds for conferences or have a solid business case to have attendance approved. It would be rare for approval of 30 people from the ato to go to one conference. Usual practice is to send a few key folk to conferences and the internal ato library subscribes to the papers.
Of course if the ato presents at a conference discounts for the presenter by the organisers may apply. SES I don’t know about.
Rumour seems exaggerated to my reading.