First language education is a matter of common sense

The Our Land Our Language report unequivocally calls for the reinstatement of bilingual education programs in remote areas, for compulsory English as an Additional Language training in teaching degrees, and for changes to be made to how NAPLAN testing is carried out. But what do these measures mean and how effective will they be in ensuring that Aboriginal and Torres Strait Islander children in remote areas get the best education we can provide?

As Greg Dickson reported, the report of the House of Representatives Standing Committee on Aboriginal and Torres Strait Islander Affairs inquiry into language learning in indigenous communities, titled Our Land Our Languages, was tabled in parliament yesterday. Education was of course, a central theme of the inquiry and is a significant part of the resulting report.

Of the eight terms of reference of the inquiry, three relate to education. They are:

The areas that the committee covered included attendance rates in remote schools, the lack of trained indigenous teachers and the inadequate training of non-indigenous teachers given the context, the lack of language testing to establish just what language a child speaks when entering the school system, NAPLAN and its inherent problems for non-English speaking students, and perhaps most importantly, how best to achieve competency in Standard Australian English (SAE). Bilingual education, as you might expect, features heavily in the submissions, the hearings and the report.

Bilingual education is clearly a hotly debated topic and the proponents and opponents are quite categorically divided. Proponents claiming that bilingual education is beneficial to both first language and target language, while opponents claim that teaching children using their first language is deleterious to the acquisition of the target language and that the best way to ensure that all children learn English is to immerse them in English-language classrooms. One commentator, who shall remain nameless, exemplified this position quite concisely yesterday, even before the report was released:

Two problems with [introducing bilingual education], both likely to cripple the future of the children.

First, finding teachers able to teach in indigenous languages will be fearsomely difficult, and likely to lead to language proficiency trumping any real aptitude to teach.

Second, Aboriginal students out bush must learn to speak English fluently if they are to escape their welfare ghettos and find work elsewhere. No other skill is as important to their future. Language immersion at school is critical to that.

The committee found heavily in favour of the proponents of bilingual education as the substantial evidence submitted clearly shows that rather than being deleterious, the use of the child’s first language in early childhood education had widespread benefits. Attendance rates increase when the child’s first language is used in class, children engage in the class for more sustained periods when they can understand what is being said by the teachers, and above all, competence in both languages is increased:

The commentator quoted above mentions language immersion at school as the best way to ensure that children learn English. However this is not entirely accurate. Immersion is known to be the best method for learning a language, but immersion requires to leaner to be completely surrounded by speakers of the target language, hence ‘immersion’. One monolingual English teacher in a classroom with thirty or more children speaking a different language is not immersion – not for the children anyway; it would actually be more accurate to describe it as immersion for the teacher. Bilingual, or two-way education, is the tried and tested effective means of teaching children in communities where English is not commonly heard, and ensuring that they learn the standard language.

Recommendation 14 therefore calls for the provision of adequately resourced bilingual education programs in areas where the child’s first language is an indigenous language, whether that language is a traditional language such as Warlpiri or Murrinh Patha, or a contact language such as Kriol, Gurindji Kriol or Light Warlpiri.

A corollary issue is of course the lack of indigenous teachers, and the almost complete lack of adequate training for all teachers in dealing with English as an additional language or dialect (EAL/D). This fact is often cited by the opponents of bilingual education – see above – as a key factor against its provision.

The committee agreed that bilingual education would likely fail unless this shortfall was addressed, and so recommends the development of a national framework of flexible and accessible training for Indigenous people to gain limited authority qualifications to teach, and incentives for them to do so (recommendations 16 and 17) and also, that English as an additional language/dialect becomes a compulsory component for all teaching degrees, as well as retrospectively as professional development for all teachers currently working in indigenous communities (recommendations 21 and 22).

Language testing is another crucial area that usually receives little attention. It won’t matter how well-provisioned an education system is, if the school doesn’t know what language a child speaks upon entering the education system, they will not succeed. Often, children who speak a contact language such as Kriol, are often mistaken by teachers and schools as speaking a poor form of English. The committee recommends mandatory first language assessment for all Aboriginal and Torres Strait Islander children entering the school system (recommendation 13). For most communities, I would add, most children would speak a similar language/dialect, with only a few minority cases of individuals whose family have moved, for instance.

Another significant section of the Our Land, Our Language report deals with NAPLAN. Of course, national standardised tests in Australia are conducted in English. This is obviously problematic in contexts where the children who undergo the tests do not speak or understand this language, and the test therefore becomes primarily a test in English literacy. This means that the knowledge and skills the students do have, albeit in languages other than English, are invisible to the tests. The result is that otherwise intelligent children are painted as linguistically deficient, and we see statistics such as the following (for the benefit of the reader I have inserted crucial caveats to aid the correct interpretation of the figures in square brackets):

Across Australia in 2004, 83% of Aboriginal students and 93% of students overall achieved the [English] literacy benchmark for year 3.

NAPLAN testing for these children is not only pointless, but as the committee found it can also be damaging to these students and can lead to disengagement in education:

In addition to being misleading, in painting a negative portrait of learners, assessments that fail to take account of these issues impact negatively on learners’ sense of worth and ongoing engagement with formal education.

There is however, a strikingly simple way that will go some way towards fixing this. It is something that experts in the field have been saying for some years, and now it’s also the view of the parliamentary committee: the provision of alternative NAPLAN testing for students learning English as an Additional Language or Dialect (recommendation 15). In concert with a supported and well-resourced bilingual education system in the children’s first language, this would mean more accurate representation of the children’s educational development, without it being clouded by difficulties of translation.

Opponents of teaching children in their first language, at least for the first few years of primary school, often argue that:

No English means no future.

We at Fully (sic) completely agree with this opinion: without access to the standard national language, an individual, or more accurately, an entire community of people, will have no prospects beyond the cultural and linguistic borders of their community. The question is how best to ensure that these children learn English. As the report clearly states time and time again, bilingual education, i.e., teaching children for the first few years of primary school in their first language before gradually transitioning into the target language, in this case English, is the proven most effective way to do this.

It isn’t rocket science; it’s just common sense. Unless a child understands what’s going on in the classroom, they won’t engage, they won’t attend, and they won’t learn anything.

As of this morning, The Australian is reporting that both major parties have expressed their acceptance of the report’s findings and support for the recommendations, at least in principle. We at Fully (sic) welcome this, but urge the various governments to immediately enact these 30 recommendations, and allow the system time to function properly, and we as a nation will eventually begin to reap the multifarious benefits of an education system that is accessible to all, and does not discriminate against entire communities whose first language is not English.

Individual sections can be downloaded from the House of Representatives website here. The full report is here (pdf).

Marion Scrymgour: in defence of my work on bilingual education in NT 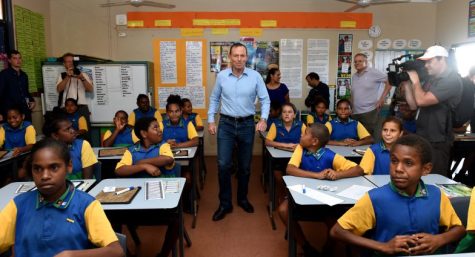