A group of Hazara asylum seekers expected to be among the first sent to Nauru for offshore processing has written an open letter pleading for the government not to deport them.

A group of Hazara asylum seekers, expected to be among the first sent to Nauru for offshore processing, has written an open letter pleading for the government not to deport them to the remote island because of mental health fears.

The letter, obtained by Crikey, marks the first time asylum seekers destined for Nauru or Manus Island have spoken out since the Gillard government last month announced plans to reintroduce offshore processing.

In the letter, written in broken English, the Hazaras argue that asylum seekers sent to Nauru in the past went “crazy” and were driven to commit suicide after long processing times. They fear they will suffer the same fate.

The asylum seekers go on to argue the only way to stop people making the dangerous boat journey to Australia is to speed up processing at UNHCR centres in Indonesia. They say it is unfair that they will be sent for offshore processing given they started their boat journey from Indonesia before the government’s policy shift had been announced. 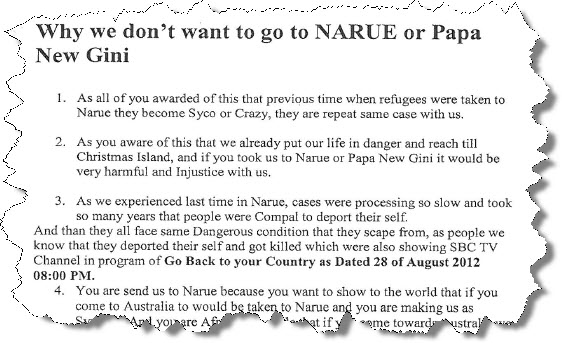 The letter writers identify themselves as asylum seekers who arrived to Christmas Island on August 14 after being taken there by a “Singaporean ship”. This is believed to be the MV Parsifal, which reportedly took the 67 asylum seekers on board to Christmas Island rather than Singapore, its original destination, after they became agitated and threatened self harm. It was the third boat to arrive since offshore processing came into effect, according to the Department of Home Affairs’ website.

The asylum seekers are currently housed at the North West Point detention centre, which is about 17 kilometres from the main settlement on Christmas Island. They say they lost one of their fellow passengers on they journey to Australia via Malaysia and Indonesia:

“We belong of HAZARA Ethnicity and we are Muslim Shia and we got killed because of our Ethnicity and religion and we look different from other Nation which is also [living] around us so they can easily recognize and killed us. Because of these all situation we need to find some secure place and we came here that we got some security. And when we reach in Christmas Island we feel that we are saved. After 10 day’s when we hear about sending us to Narue or PNG so our all hops for life is Finished and we are again going to be send to our homeland.”

More than 1600 asylum seekers have arrived by boat since the Gillard government reintroduced offshore processing for boats arriving after August 13, according to Pamela Curr, campaign co-ordinator at the Asylum Seeker Resource Centre. The first asylum seekers are expected to arrive as early as next week at Nauru, where they will be housed in a temporary “tent city”.

Curr tells Crikey that Hazara Afghans who served as translators for Coalition forces in Afghanistan are among those set to be sent from Christmas Island to Nauru.

I’ll admit this is a “first impression” without further review (I haven’t actually read the story or looked at the PDF link), but on a first look the excerpt of the letter looks fake.

(I’d explain my thoughts further if they were based on a close analysis, but they aren’t. BTW I’m more of an asylum seeker supporter than against, but again this is just a “first impression”.)

somewhat unfortunate all around, but there ya go…

‘,,,Hazara Afghans who served as translators for Coalition forces in Afghanistan are among those set to be sent from Christmas Island to Nauru.’

A lesson learned the hard way ie: beware of Uncle Sam, either as an enemy or an ally can prove fatal.

I can’t obliterate the picture of those posturing bleeding hearts in our federal parliament, snivelling through their recent speeches, each side trying to outdo each other in pretending they give a toss about humanity. And look at the evil result the litres of crocodile tears produced. Hockey was the worst, an unforgettable performance.

A pox on the lot (Greens excepted).