Unlike Gottliebsen’s columns, Verrender’s missives are not expected to appear in News Limited’s tabloid papers or The Australian. Crikey understands Verrender was offered the job two years ago, as well as equity in the company, but he declined the offer.

In his farewell Saturday SMH column, Verrender slammed the business press pack for its cosy relationship with corporate Australia: “Unlike politics, sport, industrial relations or crime, where journalists zealously pursue their quarry, when it comes to business, the Australian media generally has opted for a soft and fawning relationship. It has always been thus. And it comes back to bite.” — Matthew Knott

Baker back to writing at The Age. Fairfax national managing editor Mark Baker has stood aside from his position to take on a new “editor-at-large” role at The Age. The Melbourne Press Club president — last seen at the closing party for Margaret Simons’ New News sessions at Federation Square — will travel around Victoria, Australia and the world to report on “big news events, issues and investigative projects”, according to a leaked internal memo from Metro Media editorial director Garry Linnell.

Baker is a 30-year Age veteran and has done nearly every job at the newspaper, including a range of impressive foreign correspondent stints. As national managing ed he oversaw copy across three mastheads and national affairs coverage on theage.com.au, smh.com.au and The National Times portal. He was confirmed in his previous role just two weeks ago. Baker, who will start his new gig next month, joins Paul Kelly of The Australian and Pam Williams of The Australian Financial Review in the hallowed “editor-at-large” ranks. — Andrew Crook

Rundle on Bolt: rewriting history. Oh dear, it is always fun when the Right start to quote books. In this case it’s Andrew Bolt, responding to Barnaby Joyce’s economic nationalism, and his plan to have the government buy up, and redistribute, Cubbie Station. Headed “Lenin tried Barnaby’s plan too“, Bolt quotes Vlad from his 1907 “agrarian program”:

“We have shown that the basic and chief component of the distributable land for which the peasants are fighting are the big feudal estates … Their abolition and their complete transfer to the peasantry undoubtedly coincide with the line of the capitalist evolution of Russian agriculture. Such a path of this evolution would mean the most rapid development of productive forces.”

One presumes that the Lenin mention is a cheap shot designed to impugn every redistributionist initiative with the memory of the disaster of Soviet agriculture. But the actual story is more fascinating. For a start, Lenin’s idea wasn’t a socialist one — it’s a capitalist manoeuvre, breaking up large feudal estates, many of which lay idle, and allowing peasants to become agricultural entrepreneurs, both self-supporting and growing for sale.

The agrarian program in question was adopted when Lenin and the Bolsheviks were one faction of the Russian Social Democratic Party, which basically accepted that it would have to stage a capitalist revolution in Russia, and then start working towards socialism over decades. After 1917, they abandoned that briefly, but they went back to it in the early 1920s with the “New Economic Policy”, which followed exactly the line suggested above. Guess what? It worked. Agricultural production in the USSR boomed, until Stalin closed it down with collectivisation and the class genocide of the kulaks in the late 1920s. — Guy Rundle (read the full story here)

Front page of the day. In the US presidential race, the sort of attention and praise given to first lady Michell Obama’s address at the Democratic convention is the sort of publicity every political strategist dreams of. From today’s Boston Herald: 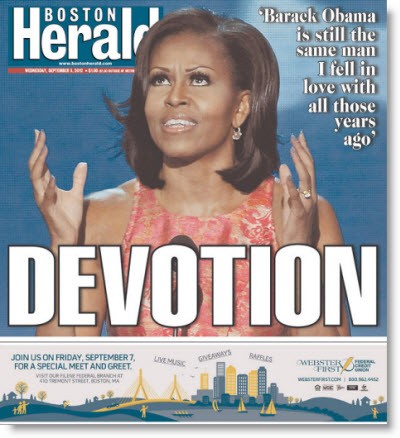 The Department of Corrections. From the September 3 edition of Michigan’s The Oakland Press; a medieval correction of miniature proportions. However. It’s not a happy one, the lancer lot. Far be it for us to appear too persnickety, but this correction appears in need of, well, a correction.

According to Crikey’s ageing medieval lancing expert (he’s a knight owl … yuk yuk), jousting involved the knights carrying lances, not lancers, given that they (the knights) were actually the lancers carrying the lances. Confused? And yeah, the 10-foot bit certainly sounds better than the 10-inch version, something our expert is convinced of being a euphemism for something unrelated to lancers and lances in particular, although ladies of the knight may perhaps argue that point. 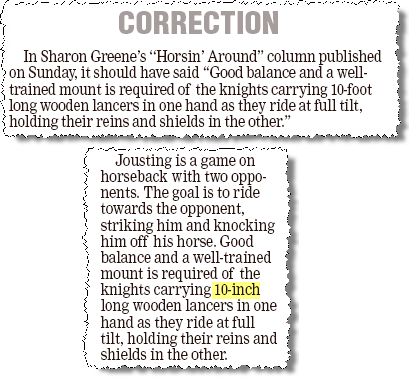 “News Corporation paid Elisabeth Murdoch almost $4m for running Shine, the production company behind TV shows including Merlin and MasterChef, in the year to the end of June.” — The Guardian

“For years, the pages of Hello! have been stuffed with television stars and society beauties willing to sell photographs of their weddings or homes to the highest bidder. But all that may be about to change. ” — The Telegraph

“In two very different industries — the news media and the financial sector — once unfathomable technology is feeding intense competition in ways that have prompted serious soul searching and some very troubling mistakes.” — Poynter

: “Unlike politics, sport, industrial relations or crime, where journalists zealously pursue their quarry, when it comes to business, the Australian media generally has opted for a soft and fawning relationship. It has always been thus…. ” did he acknowledge Steig Larsonn (albeit in translation) for this quote????

Verrender spent his life at lunch with PRs. Must have been some tough conversations.

Bolt and his “Reader’s Digressed” sort of history?
What do his employers/editors pay him, to write so “imaginatively”, and poorly (if factual communication is the aim of an op-ed writer)?