In today's Media Briefs: Front Page of the Day ... The Department of Corrections ... How the Republican convention narrative played out in the media ... ACA claims east coast in 2012 ...

EXCLUSIVE: CFMEU affiliated to ALP. The problem with running a week-long journalism sortie against a target, say the construction division of the Victorian CFMEU, is that eventually — maybe over a quiet weekend — you run out of angles. In that vein were the shocking revelations from the Herald Sun‘s state politics reporter Ashley Gardiner this morning that the CFMEU is affiliated to the ALP.

While other states have pulled in and out of the party over the years (mostly in), in Victoria’s case the CFMEU has been proudly shacked up with Labor for 30 years — and longer if you count the range of unions that came together to form the current edifice. The annual member levy enables the union to have a say at ALP state conference and help shoehorn its political views into the party platform.

Still, maybe the Hez‘s spate of publicity, that included a memorable front page with “Held to Ransom” splashed in about 180 point type, has helped, rather than hindered, the union. State secretary Bill Oliver told Crikey this morning that 304 new paid-up members joined during last week’s publicity blaze. — Andrew Crook

Front page of the day. With the Republican convention finished, all eyes turn to Charlotte, North Carolina, where the Democrats begin their convention on Tuesday: 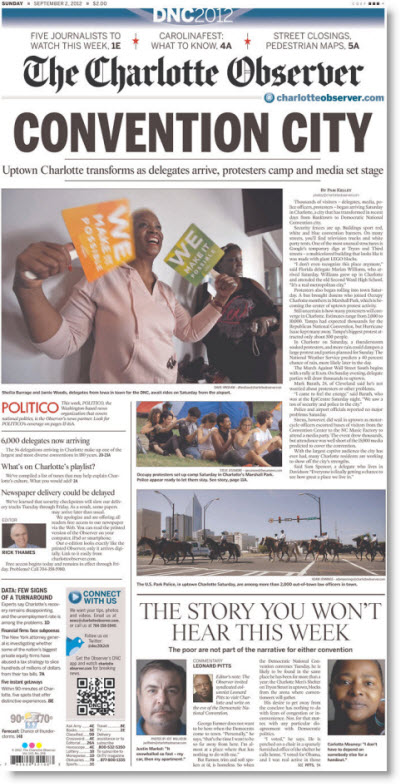 The Department of Corrections. This grovelling apology appeared The Saturday Age on September 1: 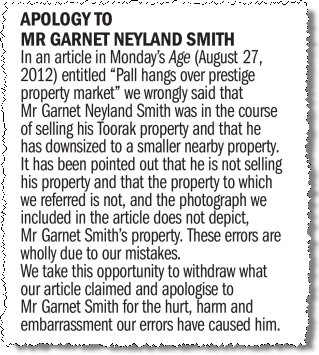 How the GOP convention played out in the media

“When Mitt Romney took to the stage in Tampa last week to cap three days of conventioneering his real audience was not the entire nation of America. Instead, like all political advertising in the close 2012 race, it was geared towards a narrow band of swing states that will decide the election.” — The Guardian

“Nine’s A Current Affair is claiming the east coast for 2012 having now won 21 weeks of the 40-week survey year.” — TV Tonight

Ecuadorian journo granted asylum in the US

“A columnist from the main opposition newspaper in Ecuador has been granted political asylum in the United States.” — BBC

“Among the many magazines that were battered by the recession, few survived such a precarious financial state as Garden & Gun.” — The New York Times