It was, as one departing journalist put it, probably the biggest clear out of talent in the history of Australian journalism. Crikey details the purge at Fairfax papers and talks to shocked staff.

It was, as one departing journalist put it, probably the biggest clear out of talent in the history of Australian journalism.

At around 3pm yesterday, staffers at The Sydney Morning Herald began being summoned to level five of Fairfax’s Pyrmont HQ to discover if they had been granted redundancy. By the time the announcements were done it was clear the paper would never be the same again. Hundreds of years of experience is walking out the door starting Friday. A similar exodus is underway at The Age and The Canberra Times — read Crikey‘s current list here.

At the Herald, Australia’s oldest newspaper, around 70 editorial staffers have now received the long white envelope containing a hefty redundancy payout. Some have been knocked back but most who applied were given the go-ahead.

“It was weird,” said one. “There was a sense of relief and sadness. Sadness because so many people are leaving and relief that those who have made plans can move on.”

“It was a deeply emotional day,” said another. An Australian Story camera crew was there filming for an upcoming special on Malcolm Brown, who is retiring after 40 years at the SMH.

The paper’s highly-regarded business section has been particularly hard hit. As well as Verrender, whose weekend SMH column was a must-read for his ability to cut through corporate spin, Elisabeth Sexton, Annette Sampson, Leonie Lamont and Scott Rochfort are departing.

“It’s really sad,” said one departing journo, who has spent over two decades at the paper. “I’m not sure if it can recover — they’ve killed off a lot of the spirit.

“You’ll have a lot of people scrambling to fill the paper. My theory is the paper won’t even publish a Monday to Friday edition in 18 months.”

Most of those going at the Herald concurred the process had been handled sensitively and professionally. One departing scribe, however, was peeved at being “congratulated” for receiving redundancy.

Younger journalists are understood to be upset that so many of their mentors are on the way out. There’s little doubt among Herald insiders that there will be less time and resources available for the investigative work the paper prides itself on.

“In the new environment people will inevitably be judged more on productivity than quality,” said one departing scribe.

As Crikey today reports, Mann will — as of early next year — become the editor of Margaret Simons’ new university-based online journalism venture The Citizen. The departure of the tenacious Willson will add to fears that Sydney based food-tsar Lisa Hudson’s plans for a consolidated pan-Metro Media foodie insert may soon be announced.

Age staff will converge on regular watering hole Saint & Rogue in Little Collins Street tomorrow night to bid farewell to those who are going. The SMH crew is gathering at The Shelbourne on Sussex Street after deadline tonight.

In the nation’s capital, the atmosphere in The Canberra Times newsroom was sombre as those who had applied for redundancy were summoned into editor Rod Quinn’s office one by one and the door was closed. One staff member approved for redundancy is long-term and much-respected cartoonist Ian Sharpe, whose graceful daubings have featured in the paper for decades.

“The Canberra Times has been my life for the past 24 years, I leave with mixed feelings. Yes, it will be a bit of a wrench,” Sharpe told Crikey.

Many of those summoned to meet Quinn yesterday were told they would not receive a redundancy (the program has been oversubscribed). Morale at Fyshwick is said to be low.

“It’s been absolutely miserable, people are despondant, I’ve never known anything like it,” one newsroom source told Crikey. Another said: “Everyone’s just hating what’s going on.”

Almost all of the night subs desk (11 subs) applied for redundancy, although some were knocked back yesterday. 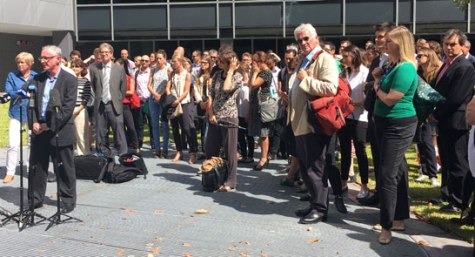 Great, more politcal staffers and media advisers to be employed.

someone kick that Abrogation of Responsibility’s Arse on the way out, too…………..

“Verrender, whose weekend SMH column was a must-read for his ability to cut through corporate spin”. How droll.

After two decades of silently watching workers being turfed out, losing conditions, etc. the cannibalistic beast of neo-liberal ideology has turned on the manufacturers of consent.
And, with barely a murmur, having internalised their masters’ worldview, they leave, unlamented and unloved by anyone except their rapidly shrinking group of (ex-) colleagues.