Refugees, not celebrities, my have the most interesting stories in the new series of SBS' Go Back to Where You Came From, which premiered last night.

Abdi Aden just couldn’t take it anymore. The Somali-born refugee had agreed to welcome three celebrities into his home for four nights, feed them and tell them his story for the second series of SBS’ Go Back to Where You Came From. His story is a traumatic and touching one: of fleeing death squads and famine as a 13-year-old to travel to Australia via Kenya, Romania and Germany.

But former 2UE shock jock Michael Smith only seemed interested in whether he had breached Australian law by using false documents to travel here by plane.

Aden, now a 35-year-old youth worker based in Melbourne’s outer suburbs, told him to get out and go stay in a hotel. “I told him exactly what I felt,” Aden told Crikey. “I wanted him to know he was disrespecting me; he wasn’t listening to me and he was my guest. He was calling me a criminal rather than a refugee.”

Aden and Smith’s altercation was one of the most captivating moment’s in last night’s debut episode — easily SBS’ most watched show of the year, with an average national audience of over one million. Last year’s series, which coincided with a heated public debate about the government’s proposed “Malaysia Solution”, was a ratings smash for SBS.

It will be intriguing to see if the public broadcaster can keep up the momentum this year given the bunkered-down ideological positions held by this year’s celebrity participants including former defence minister Peter Reith and left-wing comedienne Catherine Deveny. Reith has already announced that his experience on the show hasn’t changed his views on asylum seeker policy.

In many ways, it’s the refugees who participated in Go Back, rather than the celebs, who have the most fascinating stories. Twenty-eight year old Hazara refugee Hamid Sultani signed up to help educate the Australian population about the plight his people face in Afghanistan.

“I’ve made a lot of Aussie friends and when I tell them about my journey they are totally unaware of the situation back home — they are shocked,” Sultani said. “When people call me a queue jumper I don’t blame them. They don’t know the reasons we leave our country and loved ones.  A person like Peter — an ex-defence minister — I found him totally unaware of the situation in a country where Australian troops are fighting.”

“Communication,” Sultani says, “can take us to undiscovered places.”

Sultani fled to Pakistan in 2007 after receiving messages from the Taliban that they were out to kill him because of his work as a translator for US and New Zealand combat troops. When it became clear Hazaras weren’t safe there either — and that it was almost impossible for him to make a living — he travelled, via Dubai and Malaysia, to Indonesia. There he paid a people smuggler to bring him to Australia by boat. He now lives in Dandenong in Victoria.

He asks that Crikey not identify where his wife and daughter are living in Pakistan for fear they could face retribution for his past work as a translator and participation in Go Back. Since production of the show finished, Sultani has maintained a friendship with Catherine Deveny, and watched last night’s show with her.

Sultani isn’t convinced that the government’s new asylum seeker policy — including a return to processing on Nauru and Manus Island — will deter Hazaras from getting on leaky boats.

“People know it’s a risk but the risk they’re fleeing in their homelands is worse, ” he said. “On the boat, I thought it would be better to die here than be cut into pieces by the Taliban. At least I had hope of a better life. Hazara people in Afghanistan and Pakistan are getting shot going to the bazaar. They are facing death every day and there is no safety every time they step outside their home.”

The perception that asylum seekers arriving by boat get unfair treatment particularly riles him.

“When people say they [asylum seekers arriving by boat] are queue jumpers I say, ‘There is no queue. My name was on no list. When I got to Christmas Island I got into the queue.’ The queue in Afghanistan — where I was on a Taliban blacklist — was a queue to be killed. When you are trying to save lives there should be no queue. Safety comes first for everyone.”

The queue — where is it, and how do you take a number?

What’s behind our national obsession around boat arrivals? 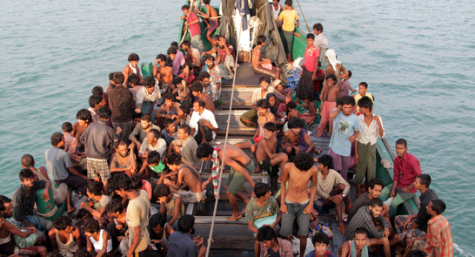 Hey George Brandis, we read the Migration Act for you and can explain whether asylum seekers are ‘illegal’

I watched the program last night and agree with the article here. I felt like giving Peter Reith, Michael Smith and Angry Anderson a ‘thump’? I think Aden showed much restraint, and evidence of his excellent manners and behaviour as a host, and Michael Smith was – just plain rude and insensitive. Allan Asher on the other hand was an articulate and caring human being, who I’d already had great respect for, his compassion and sense of decency. The women showed much compassion and comprehension of the horror behind the descriptive words. I’m so pleased those wonderful new residents are in Australia – what a blessing they are. My heart goes out to them, and hope they’re all reunited with their loved ones soon!

Oh yes, Michael Smith’s comment re restaurants as though food is the only positive new arrivals have brought here just made me feel sad! How can you live as long as he has, and just not get it! Human beings, their diversity of interests, culture, languages, life’s experiences etc?

I still find it hard to fathom, that although we’re apparently going to take 190,000 NEW people next year, there’s STILL this hysteria over allowing/welcoming traumatised people in need of protection, where the numbers are about 10,000 – even if it went to 15,000? What is our REAL reason for the hysteria? It’s hard to get past racism in my view! Fear of coffee and black skinned people who ‘talk funny’? And then of course it’s the Muslim element, which is just another manifestation of ingrained racism? The same bigotry that referred aboriginal people as ‘savages’? Unbelievable!

The question of protecting our borders is also stupid? there’s no risk to our borders, and if people still maintain that there is, let’s take people from Indonesia then, or make sure we aren’t responsible for people feeling that they have no alternative but to flee? There’s more danger to the safety of ordinary people via knives and guns – more guns in the country than at the time of Port Arthur massacre?

When Sultani disclosed that he was an interpreter and then had his life threatened by the Taliban, Peter Reith’s next question was, ‘was it your choice’? Amazing! He was Minister for Defence; this man was helping our troops and others, and when his life’s in danger we just say, ‘tough luck, your choice, piss off’? Incredible!

The rubbish about our concern for deaths at sea is not genuine either. We fail to understand, or worse, want to understand how terrifying it must be to have bombs all around; guns, interrogation, held in jail on spurious grounds, finding and burying loved ones, fear for your children’s lives; traumatised kids who scream at every noise? I can empathise, why can’t others? I’d flee too – to save my babies, I’d do anything!

I wanted to give those brave new arrivals a hug and tell them we’re not all bigots and haters! I found the look on Angry Anderson’s face pretty intimidating at times! Scary! I’ll be watching again tonight!

So Peter Reith hasn’t changed his mind? In his position my conscience would trigger major self-loathing. Best to stay in denial – where it’s comfortable.

Our new policy puts an end to any claims by Australia that we are not, in fact, red necked racists.

Reith said he hadn’t changed his mind, but it did “colour his understanding” possibly a sort of embarrassed pink colour.

But Australians are not in his position and we do have queues to get into this country, because we have borders and need to protect them and the immigration system, of which asylum seekers are a part.

And we have queues because there are far more people wanting to come here than we can accommodate. Anyone in doubt about this need only visit Europe to see what has happened as a result of soggy laissez-faire immigration policy. It is not a pretty sight and will cause endless problems in Europe for the next century.

And the fact is, there is a queue of already processed bona fides refugees, who we are satisfied are not just immigrant gate crashers, waiting in camps to come here, who haven’t got the money to jump into boats and get to the front of it.

Absorbing asylum seekers is extremely expensive, needs to be funded properly and controlled so that our good intentions do not come back to bite us later.

If we make a mess of this asylum process, we will end up with pissed off new immigrant communities and equally pissed of host communities, and our children will wear it.

The Danes used to be models of tolerant acceptance of newcomers. Not any more.

It is an awful truism, but the road to hell is paved with good intentions. If good will is not stiffened with a disciplined policy regime, critical judgment and a system of prioritization, look out!

Thanks a lot Mum and Dad