Science writer to leave The Oz. The Australian‘s in-house science scribe Leigh Dayton says she will leave the paper. A call to her office voicemail this morning revealed that the award-winning writer, who has served for a decade on the broadsheet, will officially cease duties next Friday after her role was made redundant. Crikey understands Oz management are currently looking for equivalent positions for Dayton — as they are required to do — but may not find one.

The masthead is scratching around for savings after its voluntary redundancy round closed last week, with 12 additional exits thought to be needed to reach management’s 25-strong target. Its own Media section reported yesterday that the scheme was undersubscribed but one News mole said they “knew a few who’ve been knocked back”.

Some of the excess may be sopped up from the Canberra press gallery. Matt Franklin has already announced his exit but two more positions may still be snipped. We revealed last week that gallery types were bizarrely asked to re-apply for their own jobs by penning a heartfelt email to senior management outlining their devotion. No news on the outcome of that experiment. — Andrew Crook

Why Fairfax needed Derryn Hinch. Why sack Derryn Hinch, Melbourne’s king of drive-time? For being too successful? At a time when Fairfax Radio, like its parent Fairfax Media, needs every dollar of revenue, every reader and listener that it can get its hands on and hold, the management of 3AW, Fairfax’s AM talk station in Melbourne, has taken the novel approach of not renewing Hinch’s contract. 3AW management must think the decision will somehow improve the ratings and audience size for the station’s pre-evening slot.

Ratings figures from AC Nielsen show Hinch boosted his share from the 10.9 that he got in the final survey of 2011 to a high of 13 in survey No.4. That survey saw Hinch move past Fox FM (12.1 share) into the top slot in Drive. Survey No.5 saw a small fall back to 12.6 but he was still the king of talk and Drive, with Fox FM edging up to 12.2.

Stokes takes bath on Seven write-down. Kerry Stokes’ fortune is around $320 million poorer this morning, after his 66% controlled Seven Group Holdings revealed it had cut the value of its 32.5% stake in Seven West Media by a rather large $483.5 million. The size of the write-down means Seven Group joins the likes of Fairfax Media ($2.98 billion), News Corp (around $US2.8 billion) and APN ($NZ485 million; $A320 million) in the pantheon of mega impairments in the Australian media sector in the current reporting season. All up that’s well over $6.7 billion of losses for some of the richest people in the country.

But the Seven Group’s loss on Seven West was offset by a profit $129.8 million recognised on the sale of Vividwireless to Optus and the reversal of $66.6 million in respect of Consolidated Media Holdings. They totalled a handy $196.4 million, which helped Seven Group avoid what could have been an embarrassing loss or tiny profit.

On an after-tax basis, these significant items cut net profit by $166.5 million, according to Seven West. Given the company reported a profit of $165.9 million in the year to June, it’s likely that without the profit from the sale of Vividwireless and News Ltd’s bid for ConsMedia (which allowed that $66.5 million reversal of the previous impairment), Seven Group’s profit may have been marginal to nil. — Glenn Dyer (read the full story here)

Journo support for horse-led violence. Hungover Melbourne commuters hoping to smash a bacon and egg McMuffin from Lonsdale Street Macca’s were out of luck this morning as CFMEU construction division activists emerged from an adjacent building site to fend off a mounted police attack. Police were apparently unhappy at the union’s lingering dispute with construction scion Daniel Grollo at his Myer site over the presence of paid shop stewards and decided to confront the picket line with 13 armoured equines.

One media squawker perturbed by the protest was Channel Seven Weekend Sunrise host Sam Armytage, who took to Twitter to revel in footage of horses knocking over a “violent thug”.

The charming Armytage is apparently highly regarded for her chatty soft-ball interviews with conservative political leaders such as Tony Abbott. — Andrew Crook

Front page of the day. The latest issue of Burmese newspaper The Myanmar Times devotes its front page to the removal of pre-publication censorship in that country, which it calls “another load of cement being poured into the foundations of democracy here in Myanmar”. 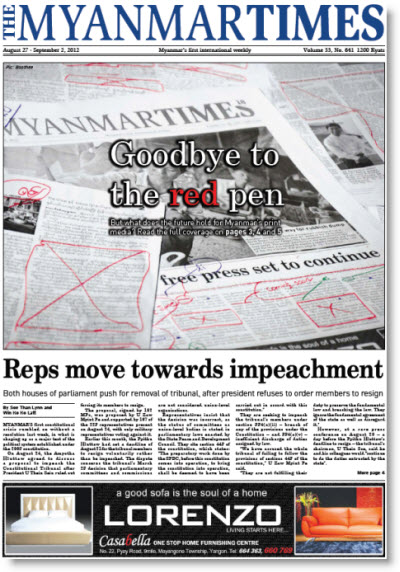 NZ Herald to have more opinion

“The New Zealand Herald is moving to a more opinion-led format for its relaunch as a compact edition in two weeks.” — mUmBRELLA

Men write 72% of US election stories

“A new study from the Women’s Media Centre and the 4th Estate Project found that 72 percent of newspapers articles covering the general election between April 16 and August 25 were written by men.” — The Atlantic Wire

“A Turkish cameraman who went missing while reporting from Syria appeared on Monday in an interview with a pro-government Syrian television channel and said he had been seized by Syrian soldiers in the northern city of Aleppo.” — Reuters

So can we expect more first-class science reporting from the Oz – all the denialism that’s fit to print – or will they just not bother?

What’s % of articles about politics are written by women for Crikey?

Actually, what is the % for all writing by women on Crikey?

It’s ingesting publishers have created a seperate ‘woman’s agenda’ site, presumably to cater for, and advertise to, a female audience.

Some samples of the features from the ‘woman’s agenda’ site today:

“where do time poor women go to meet a partner”

“the insanity of the pre-clean before the cleaner arrives”

The latter seems ironic. One might wonder how we ‘train’ young women to be ‘gender blind’ when you create a seperate website that talks about cleaning and finding a partner, and ignore the deficit in content written by women on your flagship news and politics site. Kinda seems like the serious stuff is considered ‘men’s business’ on Crikey?