A proposed Tasmanian ban on selling cigarettes would be a prohibition-style flop, writes Martyn Goddard at Tasmanian Times.

The 18th amendment to the United States constitution came into force on January 29, 1920. The manufacture, sale, transportation import or export of intoxicating liquors was prohibited. Thus began the greatest social experiment, perhaps, in human history.

Tasmania is heading back to the 1920s by seeking to launch its own prohibition era — banning the sale of cigarettes to anyone born after 2000, effectively preventing the millenial generation from ever taking up the habit. Tasmanians who are now 12 years old would never be able (legally) to smoke as adults; those who are now 13 would be able to.

Tasmania’s upper house has unanimously passed a motion calling for the ban, the Labor-Green government says it will seriously consider the proposal, and the state’s Commissioner for Children is assessing it.

As the world — and Tasmanian politicians — should know, the US prohibition experiment failed. In 1933 came the 21st amendment, ending prohibition and regulating alcohol rather than banning it. Prohibition did not stop people drinking. Mostly, it changed the suppliers rather than the consumers. While the population went on drinking, those importing, making and selling the stuff ceased to be the owners of licensed, regulated businesses. Their role was immediately taken by organised criminals selling bootleg liquor, often of poor quality. The Mafia, Al Capone — and the FBI, which got massively increased funding and powers — did very well. The nation did badly.

In just 14 years that disastrous experiment, with the people of a nation as the guinea pigs, landed America with an organised crime problem with which they are still dealing. When prohibition ended, the mob changed its focus from alcohol to s-x and drugs, and from speakeasies to casinos.

But the lesson was not learnt. Prohibition was extended to a vast range of other drugs — opiates, cocaine, amphetamines, cannabis. The result was similar: a boom in organised crime and in law enforcement, poor quality drugs on the market, customers self-administering drugs of unknown strength and adulteration in conditions that invited disaster. Fatal overdoses followed in massive numbers. The high cost of illegal drugs led customers to inject, getting more bang for their buck but risking overdose, AIDS and Hepatitis C.

As drug prohibition spread around the world, crime followed. Criminal gangs took over whole countries. As insurgencies in Africa, Asia and South America looked around for a source of funding, their armies moved into the drugs trade.

But in the 1960s and 1970s, when the link between tobacco and lung cancer became undeniable, the lesson — for once — was learnt. No country has banned tobacco; the focus has been instead on regulation, education and control.

Australia has a good record. Fifty years ago, smoking among adults was almost ubiquitous: the rate has since plummeted. According to the 2011 Australian Institute of Health and Welfare survey, only 15.1% of Australians aged 14 and over were smoking every day. In Tasmania, the rate has gone from 24.4% in 1998 to 15.9% in 2011, with a dramatic drop between 2007 and 2011 due to price increases, and smoking bans in restaurants, bars and cars with kids. The debate over plain packaging may prove to be as beneficial in changing community attitudes as the measure itself.

Control over smoking is working. Most young people do not begin: this is revealed in the statistics on the numbers of people who have never smoked. Nationally, an extraordinary 57.8% (52.8% in Tasmania) have never used tobacco; another 24.1% (28.7% in Tasmania) have managed to kick the habit. Prohibition would destroy this extraordinarily successful strategy by placing tobacco use outside of the range of regulation and control.

Australia compares well with other nations, though almost everywhere — including in China and India — smoking is on the way out. According to the OECD, Australia is substantially better than the average both in the level of daily smoking and the rate at which young people are not starting. 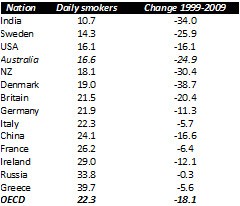 Those supporting Tasmania’s proposal to ban tobacco supply to everyone born after 2000 deny that it amounts to prohibition. But it does. It replaces the successful means of tobacco control we now have — education and regulation — with what will in time become a blanket ban.

As time passes, more and more people would become subject to Tasmania’s ban. Eventually it would become total. But nicotine is perhaps the most addictive of all recreational drugs. Anyone starting to smoke, at any time in their lives, has a significant chance of becoming addicted. There is already an illegal, criminal supply of tobacco, driven by increases in the excise paid on commercially available cigarettes. The history of drug prohibition shows that people who want a drug are likely to get it anyway, legally or illegally.

The patterns of cannabis use show how powerfully attractive a drug — even a relatively non-addictive one — can become, particularly to the young, if the allure of mild outlawry is bestowed upon it. Naughty is nice, even when it isn’t really nice at all.

It is a fantasy to say that this ban will result in a smoke-free generation. It won’t. It will lead instead to the criminalisation of an entire generation of law-abiding people. It will spawn a powerful and dangerous new pack of organised criminals, and the consequent corruption of police and officials. And it will mean, eventually, an end to our chances of genuine and effective tobacco control.

Nowhere else in the world has such a measure been enacted. Perhaps there’s a reason for that.

*Martyn Goddard is a former ABC journalist and an independent health policy analyst based in Hobart. This article was first published at Tasmanian Times.

Tax hike: will smokers cough up or butt out?

Cigs up: just a puff of hot (smokey) air?

I am not sure I completely agree… cigarettes, by nature are something done regularly, and pretty difficult to hide, whereas most drug and alcohol use can be done ‘under the table’ so to speak, and tend to be done outside of work hours.

I think the ban has a high likelihood if working to some degree, but criminalising it at a personal level will cause issues, just like it has with illicit drugs. The only people they should be chasing with the law, is the vendors.

My issue is more the encroachment on personal liberty. When you are born should not dictate what freedoms you may enjoy.

Big difference between alcohol and tobacco – moderate alcohol use has little or no impact on health. Nor is it addictive. Nor does using it correctly kill you.

I’m in favour of the ban but against any criminal penalties for use or possession – these should be reserved only for those who sell it. Whilst this will drive supply underground to an extent, what is the moral difference between a publicly-listed company which cheats/lies/threatens to sell a product which kills, and a criminal enterprise which does the same?

Ben, as someone who has known serious drug addicts in the past, let me assure you that “Difficult to hide” is all relative. One person that I knew would wake up in the morning, smoke a bong, got to work, come back during lunch, smoke a bong, go back to work, come home, end his day with a few bongs. Marijuana use is no easier or harder to hide than cigarette smoking, and prohibition will NOT change people’s addictions. I’m dead certain that there are plenty of kids born in 2000 who would smoke a few cigarettes just because it’s illegal – and all it would take is for them to get one of their mates born in 1999 to buy a pack for them. Once they’re addicted, the bikie gangs would have a field day.

One other issue that hasn’t been raised in any of the media I’ve seen is regarding tourism. Australia’s tourism and hospitality industries are dependent on tourism from countries like China. And yes, while China’s overall smoking rate is around 25%, that’s because only 2.4% of women smoke, and a whopping 52.9% of Chinese Men smoke (http://www.nejm.org/doi/full/10.1056/NEJMc1102459). What will happen to tourism in Tasmania when blanket smoking bans are introduced? Simple: It would be decimated.

Prohibition has never worked! Our politicians are not placed in positions of power to make such decisions, citizens still need choice! No to nanny states! Whats the next step by the idiots in power, NO MORE DRINKING? NO MORE FATTY FOOD? ENFORCED EXERCISE? NO MORE DISSENT? NO MORE PROTESTS? NO MORE CRITICISM OF THE GOVERNMENT?
I would really like to tell the government to take a hike from trying to control what people do in their lives!!!!!
It appears that Western governments have been over stepping their bounds more and more recently. Not only are we subjected to more and more draconian laws, but we have had our rights and privacy stripped away. Rather than going forward it appears that we are returning to tyrannical feudal systems of control.

I think this ban is well intentioned but wrong-headed. What we are doing now is working, slowly but surely, even if it may need a few more tweaks to overcome Big Tobacco’s ongoing attempts to circumvent restrictions on marketing their addictive poison. When I was young, nearly all grown-up men smoked, and while it was still regarded as slightly risque for a woman to smoke, more and more girls were taking it up. Now you just see a few pathetic souls huddling against the wind outside workplaces and entertainment venues who can’t wait to get home to tend to their addiction. Prohibition is unlikely to work and may have have the opposite effect of making smoking seem more desirable to many young people because of its illegality. Nearly all of today’s smokers were once rebellious teenagers who wanted to look ‘cool’ and grown up, disdainful of their elders’ warnings that smoking was a privelege reserved to adults and that it was very naughty for young people to smoke, with dire warnings that it will make you sick when you’re very old (most teenagers can’t imagine being 40). Eventually, smoking will be seen for what it is, a rather unattractive, unglamorous and expensive addiction practiced among a few consenting adults in private.