There's one thing we can say about the weekend's defeat of a Labor government in the Northern Territory--- the decline in the Labor brand continues.

The decline continues. There’s one thing we can say about the weekend’s defeat of a Labor government in the Northern Territory— the decline in the Labor brand continues. Federal factors may well have played a part and the freezing out of Julia Gillard from the campaign suggests that the Labor machine men feared that they would.

But before the Liberal-Nationals get too excited about what the string of victories in state and territory polls means for the main national event to come they should consider long and hard the significance of the weekend polls on voting intentions in Queensland. State governments that do the sensible thing and make the hard budgetary decisions early on create concern about what an austerity loving Tony Abbott  might do. The pollsters tell us that Labor still has a long way to go in Queensland but Campbell Newman is certainly lending Prime Minister Gillard a hand.

A broken record. The record low Arctic ice extent foreshadowed last week has come to pass. With a couple of weeks to go before the minimum area is usually recorded the ice extent will be close to 50% lower than the average area recorded in the 1980s: 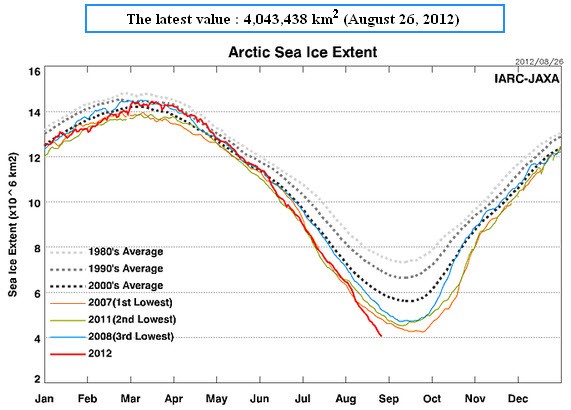 There’s an interesting commentary of what this rapid decline means at “Why the Arctic sea ice death spiral matters“.

Fiddling the figures. Not a happy headline for Australian miners in The China Daily this morning. When official publications start writing about growing bankruptcies then things must be getting serious. 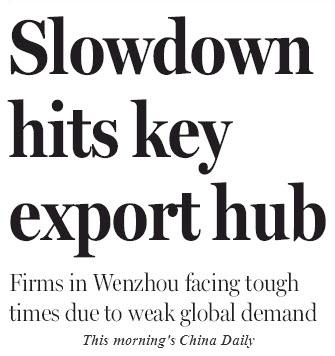 Add to this story one from the New York Times late last week and there really does seem to be something to worry about.

According to The Times piece China is facing “an unfamiliar problem with its newly struggling economy: a huge buildup of unsold goods that is cluttering shop floors, clogging car dealerships and filling factory warehouses.” How big the build up in inventories actually is “has been carefully masked by the blocking or adjusting of economic data by the Chinese government — all part of an effort to prop up confidence in the economy among business managers and investors.”

Yet the private sector produced HSBC/Markit survey showed that inventories of finished goods rose much faster in August than in any month since the survey began in April 2004:

Officially, though, most of the inventory problems are a nonissue for the government.

The Public Security Bureau, for example, has halted the release of data about slumping car registrations. Data on the steel sector has been repeatedly revised this year after a new method showed a steeper downturn than the government had acknowledged. And while rows of empty apartment buildings line highways outside major cities all over China, the government has not released information about the number of empty apartments since 2008.

AS to Labor’s brand on the want in the NT

Wasn’t one of the stories that NT Labor ads
didn’t have the ALP badge?

Perhaps that led to a lack of brand recognition and contributed to their loss?

It is not Labor’s decline, it is a gap between promises and deeds.