Since I’m not, I don’t know what it is to be Russian, but it seems (if political and military history, culture and acquaintance are anything to go by) to involve drama. So does Eifman Ballet. I don’t know if it’s right for me to say so, but I don’t get the sense Boris Eifman, the […]

Since I’m not, I don’t know what it is to be Russian, but it seems (if political and military history, culture and acquaintance are anything to go by) to involve drama. So does Eifman Ballet. I don’t know if it’s right for me to say so, but I don’t get the sense Boris Eifman, the man behind the ballet, has any real interest in subtlety. Which isn’t to say he’s heavy-handed; just robust.

Anna Karenina may very well be the greatest novel ever written. There are certainly many of great literary credibility and influence who would argue to that effect. Put Tolstoy’s ‘flawless magic’ (as devotee Nabokov described it) together with a judicious selection of Tchaikovksy and you’ve got some high art to be reckoned with. You’ve also got something to live up to, dramatically. This isn’t something that frightens Eifman. It inspires, fires and spurs him.

On stage, he has, by any standards including the very highest Russian ones, the most extraordinary company of dancers; almost superhuman, quite different from any I’ve ever seen. Eifman appeals as reinventing ballet every single day of his working life. It must be hell on Earth, I imagine, keeping up with him. He might express it in rather crude English, but there’s no mistaking, I don’t think, Eifman’s boldly stated ambition to appropriate that most prized in theatre, at least insofar as narrative, drama, action and character exposition.

To successfully achieve this in the realm of ballet, Eifman has ruthlessly stripped away much of the Russian context of Anna Karenina, to focus on the personal, rather than the political. It’s the love triangle and it’s social consequences he’s interested in. Anna, her cuckolded husband, Karenin; her lover, Vronsky.

The lights come up on a boy, pushing a toy train around a circular track. He’s caught up in the timeless vortex of childhood, while his parents, the Karenins, are about to be caught in a whirlwind; a frenzy; a tempest. Anna emerges to dote on her son, followed by her stern husband, who strides with the kind of dignity, pride, self-assurance and arrogance that, usually, only money and position can bring. (From the first, Okunev’s costumes impress. Karenin is suited-up in a sleek, black ensemble that serves to elevate and elongate Markov’s already lanky frame. Similarly, the elegant, evocative simplicity of Margolin’s sets, as well as the mood-setting dynamics of Filshtinsky’s lighting, gild the lily.) Karenin scolds Anna, for over-indulging their son; he leads her away.

In this detail, we glimpse the nature of their relationship: her subservience; compliance; even obedience. There’s a paternal quality to the way he deals with her, perhaps born of their substantial age differential. This is just the first scene and, already, at least two of key characters have been clearly drawn and the story set up.

At one of the balls which fill their lives, so numerous they almost merge into one, Anna meets and dances with Vronsky, a cavalry officer. Zmievets body is so expressive, so bendable, we’ve no trouble discerning her discomfort ad confusion. She’s clearly attracted to the upright and handsome Vronsky, but is rent asunder by her wifely and social duty, as against the boredom that can only but feed her desire; for escape, excitement and to feel fully alive once more. Again, in but one, crisp, narrative precise vignette, Tostoy’s underpinning theme of duty versus desire, propriety versus passion, is delivered.

The scenes described are emblematic of the entire work, in terms of its clarity. I can’t think of another ballet in which a story is so well-told, or with such vigour. Eifman’s choreography is bold, brassy, brave and brilliant. He unashamedly has his dancers reach for the stars; attempt and realise the impossible; steal our breath away. Then he does it again. And again. And again. For some, (the dancers, for example) it may prove exhausting. For me, it proved exhilarating.

We can’t dismiss the corps de ballet (the collective evocation of a full-steam-ahead train is, on its own mindblowingly inventive and effective) but, when it comes down to it, this story, this ballet anyway, is a prolonged pas de trios, in which spectacular conflict is translated into spectacular choreography; in which classical ballet meets contemporary dance in a way and to an extent I’ve never before witnessed. One might imagine this would jar, but a dimension of Eifman’s genius is that he somehow finds the point at which the two can meet and merge.

Anna is a rose between two thorns and every emotional and existential outcome is explored. We see Vronsky’s rampant desire. Anna and Vronsky’s secret yearning, in their separate bedrooms. There is loving, tender consummation. Brutal, uncaring rape. Frustration. Decadence. Confrontation. Separation. And, finally, suicide.

Physically, it’s among the most acrobatic ballet I’ve seen, too. Lifts are so accentuated it’s surprising someone isn’t caught on a skyhook. There are moves so extraordinary as to beg slow-motion replay, to ensure there’s no sleight-of-hand. Such as when Markov raises Zmievets over his head and rolls her down his back, miraculously catching her in good time. Did my eyes deceive me? I can assure you I’d none of the morphine to which Anna resorted. Then there are what I might call the primal elements, such as when, at different stages, Karenin and Vronsky carry Anna on their backs, like burdened beasts.

And, hot on the heels of a dizzying display of classical technique, you’re as likely to find a sequence that puts you in mind of a chorus line, the folies bergere, or synchronised swimming (Eifman seems to share a penchant for symmetry and beautiful angles). I think I even saw one of the dancers bust a breakdancing move.

I admired how Anna’s trust game fall from a bedrail prefigured her later, irrevocable plunge; her swan dive to oblivion. And Eifman’s unbridled portrayal of sexuality is rare and refreshing. Inasmuch, it makes practically all other dance look stitched-up, hung-up, repressed and disingenuous.

There’s been no shortage of critics anxious to sink the slipper into Eifman’s very different vision for ballet. He is, inarguably, unto himself. But even if you can’t cope with his relentless intensity, you still, surely, have to admire his sheer chutzpah. He’s a radical, a provocateur, even a sensationalist. (Isn’t it something, to experience sensation, once more?) He takes dancers and audiences to the edge of their physical and emotional tolerances.

He takes risks. Gloriously big ones. The orthodoxy more-or-less detest him. What’s not to like?

The details: Anna Karenina played the Capitol Theatre in Sydney on August 15-19. The show moves to Melbourne’s Regent Theatre on August 29 until September 2 — tickets via Ticketmaster. 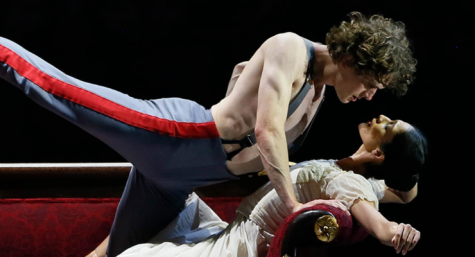