Gillard secures apology from The Oz over AWU story

The PM approached senior News Ltd executives today to complain about a story in The Australian that claimed she had set up a "trust fund" for a former boyfriend -- and she won.

The Prime Minister approached senior News Limited executives today to complain about a story in The Australian that claimed she had set up a “trust fund” for her former boyfriend 17 years ago. And she won — at least this round.

The Australian’s editor-in-chief Chris Mitchell told Crikey this morning that Gillard had “dealt at group level rather than anyone on The Oz” in relation to the story, which ran in the paper and on its website, and has now been spiked. The PM’s approach resulted in a grovelling online apology, with the imperious headline “Apology to the Prime Minister” that has run on News Limited sites around the country. Mitchell said reporter Ean Higgins had got one wrong word in the yarn, which richly recounted former AWU official Bruce Wilson’s current life as a chef on the NSW north coast.

The original story, headlined “An old flame faded into black”, was removed from the web but has been preserved for posterity below. It appeared to have incorrectly substituted the word “trust” for “slush” in reference to the fund overseen by Wilson and set-up by the PM. 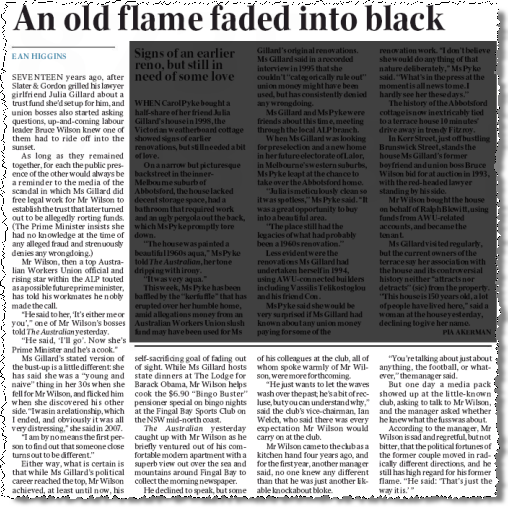 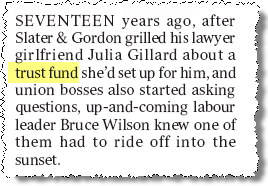 It is the second time Gillard has intervened directly to complain about a story relating to the saga. Last year, she called then-News CEO John Hartigan at 8am to arc up about a Glenn Milne opinion piece that alleged that the PM had “shared a home” with Wilson in Fitzroy. In fact, Gillard had her own house in Abbotsford at the time. The paper pulled an opinion piece and acknowledged that the “assertions are untrue” and that no one from The Australian had attempted to contact the PM to clarify the basis of the story.

News Ltd spokesman Stephen Browning said the “apology speaks for itself”, when asked to comment, but declined to reveal internal communications between the PM and current News CEO Kim Williams.

Today’s move suggests sensitivities remain high inside the PMO over the issue, which the PM has not chosen to address in Parliament.

Gillard communications director John McTernan did not respond to queries over the News approach. But as Crikey hit the button today, the PM was fronting a press conference to explain her role. She accused “misogynist nut jobs on the internet” of spreading lies and said she was the victim of a “sexist smear campaign”.

By 10am today, after the PM’s intervention, the story was gone and the apology was running as a related story on the front page of The Australian‘s website. Crikey understands that the story will soon be resurrected with the word “trust” replaced with “slush” — as suggested by Crikey to Mitchell this morning.

The Australian‘s national chief correspondent Hedley Thomas has produced an unprecedented series of front page splashes over the past week aided by some leaks from Seattle-based former Slater & Gordon partner Nick Styant-Browne. Styant-Browne told Crikey earlier this week that Thomas had been sicced on to him by retired personal injury lawyer Harry Nowicki, who has spent years researching a book on the era.

Today, Thomas quoted Styant-Browne saying the serious news coverage should be counterposed with the “florid allegations” made in the online campaign against Gillard. Some of those are becoming more florid by the day. Crikey can reveal that former cartoonist with The Oz Larry Pickering, the convicted con man blamed by the government for re-igniting the Gillard saga, has removed an anti-Semitic rant from his website posted under his name.

The post, scrubbed from the web but available on Google’s cache here, refers to “the bleating Jews who actually believe they are God’s people are still combing the world looking for war-crime culprits”.

“Of course the “holocaust” happened but it was one of the many episodes of war and far from the worst in terms of human life. But Jews believe they are God’s people … so they are more important,” the blog post ran.

“The vanity-driven, thieving Jews did not have a country so they stole someone else’s with the West’s (and the East’s) blessing … and we wonder why we are hated  … Sure, the Jews are more industrious and inventive than the lazy Arabs. The Arabs have used receipts from the West’s addiction to oil to build crass monuments to themselves.

“An oil drunk Arab’s benchmark of success is to have a hundred more Rolls Royces than his cousin. The Jews have built a highly sophisticated nation from worthless rocky ground … without the aid of oil reserves, but so what? It’s not their land to succeed with.”

So-called “Asians” also come in for a spray on the blog. “Asians actually believe that because they don’t have hairy bodies and we do, we are closer to the apes. They don’t say that to us but they say that among themselves.”

Mayne: governance issues aplenty for Costello to tackle at Nine

How to get yourself on the News Corp enemies list — fast

Imagine this sort of whispering campaign from them, against Howard or Abbott?

And “league tables for war crimes”? Grate idea.
As for “hairy Caucasians” does he mean like those epithets about “monkeys”?

And that would be the same reporter, Ean Higgins who was so disgusting in New Zealand during the Pike River Coal Mine a couple of years ago….. time to pull his head in, OZ?

“Senior Cabinet Ministers have rounded on Australian journalists covering the Pike River coal mine crisis, labelling their questions “disgraceful” and branding one a “tosspot”.

Police Minister Judith Collins this afternoon added to the scorn already heaped upon Ean Higgins, from The Australian, for some questions he asked at a media conference this morning.

“Frankly, those journalists need to sit down and think about what they’re actually doing. What they are doing is they are cheapening the work of other journalists working in Greymouth and they are absolutely not respecting the terrible time the people of Greymouth are going through,” Collins said.

Julia Gillard, Slater & Gordon are bound by client confidentiality from speaking about work as lawyers and some sections of the media must know this yet they continue to demand, against the concept of natural justice that someone (including the PM) must answer allegations once made.

If they had proof of anything they should just deliver it rather than their ridiculous insinuations.

The Australian has reduced itself to the levels of The Truth and Kim Williams on one hand demands propriety and honesty from the general public re- illegal downloads but fosters an atmosphere of behaviour where the rules are malleable when it suits.

The highly dubious sources should have rung alarm bells for News Ltd. I hope Nick Styant-Browne potential clients in the US, if he still operates as a lawyer, are aware confidentiality is not guaranteed.

I’m underwhelmed that Crikey chose to re-publish the dreck on Pickering’s website. The fact of the piece’s removal from the website could have been reported in general terms without quotes, thereby giving it additional oxygen.