Abbott is seen within the party as being effective on his pet issues -- boat people and the carbon tax -- but often on shaky ground when forced to venture onto other topics.

“The Opposition Leader, no less than the prime minister, has an obligation to educate and inform the public and not mislead,” veteran ABC journalist Barrie Cassidy wrote on The Drum late last week, calling on journalists to challenge Tony Abbott’s regular rhetorical furphies.

His colleague heard the call. Last night on 7.30, Leigh Sales wasn’t taking “the carbon tax is to blame” as the answer … 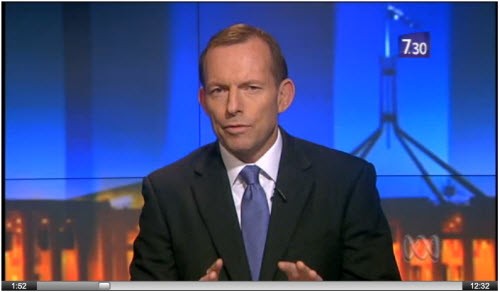 Abbott tried to say Labor’s tax environment had contributed to BHP abandoning the expansion of Olympic Dam mine yesterday, despite the company carefully blaming everything else but in a statement (which Abbott admitted he hadn’t read). He continued the line about the carbon tax starting to hurt “from day one” but in the face of positive economic news couldn’t point to any examples. He refused to back down from his description of asylum seekers as “illegals”, which every legal mind in the country disputes. He blamed Labor for uncertainty in the business environment while admitting the Coalition had no alternative industrial relations policy. He said the “circumstances of her [Julia Gillard] departure from a previous employer are of public interest”, but couldn’t nail down a single question or allegation against the Prime Minister over her Slater & Gordon past.

Sales posed it as a question: “You were pretty loose with the truth today, weren’t you?” He was. He regularly is.

All this makes Coalition operatives nervous. Abbott is seen within the party as being effective on his pet issues — boat people and the carbon tax — but often on shaky ground when forced to venture onto other topics, particularly economic and financial matters. Some party insiders reckon he lacks substance, lacks depth, lacks vision; a performing parrot only good at reeling out rehearsed lines.

The memory remains fresh in some Coalition MPs’ minds of Abbott’s unfortunate and strange silence when confronted by stupid claims from a reporter over his “shit happens” comment while in Afghanistan. They think he is only a few similar stuff-ups away from serious questions over his leadership. His stuff-ups are rare, party polling is strong, and there’s little talk about a replacement. But many in the party are acutely aware of his vulnerabilities.

Labor people whine insistently that the media isn’t tough enough on Abbott. The interview last night demonstrates why they want him called out.

So when one of their own (Cassidy) points out “that elephant” in their media room, and what needs doing, that’s all right – but when the rubes do it (as some have, for so long), that’s to be ignored?
Club Rule #1?

finally last nite on the 7.30 report someone from the main stream press put abbott under the microscope and he scrimed and prevaricated like the serial liar that he is

the guy’s a complete moron. and if the old adage “people get the government they deserve” is true, well i can only conclude that the majority of australians too, are complete morons, if they vote this guy into high office. for all her faults, at least gillard show some modicum of intelligence. this guy has none.

AS we get closer & closer to the election the spot light
will be turned on Abbott.

His failure under pressure will be highlighted and I believe
uder the continued pressure of a campaign he will
suffer a severe meldt down.

Remember that he has the slenderst of majorities as leader
of his own party.

When Liberal party members realise that Abbot is all that
lies between them and certain victory he will be dumped.

The urbane, personable and presentable Turmbull will return
to the job

“Bubbles Abbott” – good with dogs (it’s the whistle) – but “does not play well, with others”?
And this “Leigh Sales” that ambushed him – he was probably expecting her usual “lean the Right way” starboard-list questions?
He won’t be going “back there” again for a while either (remember Father O’Brien and what he got out of him at another confession) – better stick to the domesticated Limited News stable of hacks and ponies – at least they won’t buck (him or “The System”).
And it’s not the first time he’s admitted not “reading (the detail)” – relying on the reading and interpretations of others (he trusts) to have him up to speed is it?