Age stars spewing over SMH treatment. The Age newsroom was aghast this morning when it discovered that sister paper The Sydney Morning Herald had relegated its investigative unit’s cracking RBA bribery exclusive to the graveyard of page 2. Instead, the Herald ran with a so-so leak from Wayne Swan’s office above the fold on the front page warning the states not to gouge his mining tax by jacking up mining royalties. “[Richard] Baker and [Nick] McKenzie were furious and raised the issue on the newsroom floor”, one senior Age source told Crikey this morning. 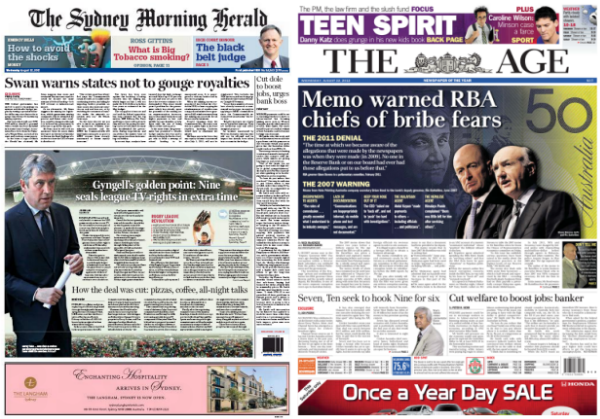 A pick-up of the yarn — which proves that the RBA’s most senior appointees were aware of the bribery issue in 2007 but stayed mum — ran on the front page of the AFR and as the lead item on AM. Interestingly, new Sydney Morning Herald editor Sean Aylmer used to work for the RBA before moving across to journalism, so he would have been well aware of yarn’s gravity. Both Age journalists declined to comment to Crikey.  — Andrew Crook

Appeal tones down Sandilands muzzle. Kyle Sandilands’ colleagues at Sydney’s 2Day FM will no longer have to pay for his sins, after the Administrative Appeals Tribunal today announced its decision to apply strict “decency” conditions only to those programs presented by the infamous shock jock. The new licence condition effectively removes the existing decency provision of the codes which were supposed to apply to all programs for the next five years.

Australian Communications and Media Authority Chairman Chris Chapman approved of the AAT’s decision: “I note the AAT has decided in this case that making compliance with the code a condition of the licence is an appropriate, measured and proportionate regulatory response.” — Crikey intern Sarah Duggan

Vic govt spurred into Black Cat action. Some heartening news for Victorians concerned that Ted Baillieu had junked his commitment to his notorious “big cat” search. The front page of today’s Weekly Times confirms that the premier has resuscitated his pledge, floated at the last two elections, to launch an “investigation” into the 60 years of “sightings” of cougars, panthers or pumas that were apparently destroying crops from Gippsland to the Grampians. 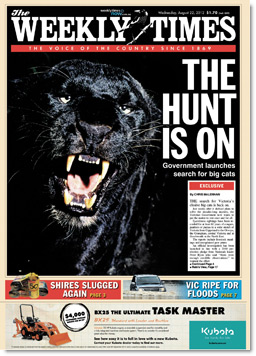 In January, the Times was reporting that the hunt had “gone flat“, with the study downgraded to a “small desktop study of existing documents”. So what prompted the switcharoo? Three weeks ago, the popular Gather Around Me podcast aired the following discussion between its two hosts, Fairfax humourist Ben Pobjie and media savvy activist Cam Smith. Smith suggested that Baillieu’s one-seat majority was hanging by a cat whisker:

Cam Smith: “Do you mind if I get a little bit political?”

BP: “I wish you would, I’m sick of you being so neutral on everything.”

CS: “If you’ll recall, at the last state election in Victoria, the Ted Baillieu government was formed, with a majority of one seat. Will they be able to maintain that very slight majority considering that prior to the last election they promised that they would conduct a full inquiry into the Gippsland panther situation, and insofar they have failed to deliver on that promise.”

BP: “There’s the thing, right, because they’re just one bad by-election result from losing government. And if there is a by-election, who’s going to vote for them when they’ve done nothing to find the Gippsland panthers? … Ted Baillieu would prefer to stick his head in the sand, rather than look for panthers, or for yowies,
and it’s going to be the end of him politically.”

Now, Baillieu agriculture minister Peter Walsh, despite his government’s sacking of 4200 public servants, says departmental resources are available to “review existing literature, reports, correspondence and other evidence for the presence of big cats in Victoria, and it includes liaison with relevant community groups and individuals who have reports or records of possible sightings.”

Front page of the day. It’s probably the Hunter S. Thompson factor but here at Crikey we were very impressed with the front page of this week’s edition of free New York newspaper The Village Voice: 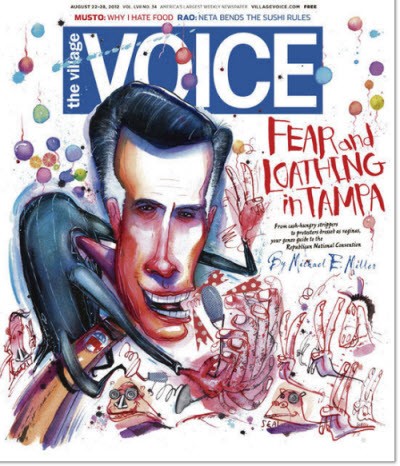 “As Channel Nine celebrates its cricket history with a mini-series about Kerry Packer, bitter rival Channel Seven has emerged as a serious threat for cricket’s broadcast rights.” — The Age

“Foreign press associations in China say they are ‘extremely concerned’ over recent instances of harassment and violence against foreign journalists.” — BBC News

Game over for Nintendo Power magazine

“Nintendo Power is one of the longest-running game magazines in the USA, having been published continuously since the summer of 1988 But our source say that Nintendo Power editors and staffers were told of the magazine’s impending shuttering last week.” — ars technica

What I want to know is why the ABC’s 7.30 has been taking credit for The Age journos’ exclusive.
Your report says it was McKenzie and Baker’s “cracker” of an exclusive but since early this morning the ABC’ news bulletins have been saying it was their program that uncovered the damning memo.
Which is true, people?