Gillard on top in a week of wide and varied stories

Prime Minister Gillard shaded her colleagues for media coverage in a week which saw political and peripheral issues a plenty and found her central to many.

Prime Minister Gillard shaded her colleagues for media coverage in a week which saw political and peripheral issues a plenty and found her central to many: legislating offshore processing for boat arrivals and conditions on Nauru and Manus Island; questions over her conduct while working at Slater & Gordon; and a spike for the ALP in the latest Newspoll just two months after the introduction of the carbon tax, and exactly two years since Gillard promised her government wouldn’t introduce one.

The combined coverage of the PM and Opposition Leader Tony Abbott is greater than that of the rest of our subjects put together this week; Abbott’s dismissal from parliament after calling Gillard a liar over school funding saw him questioned over his treatment of Deputy Speaker Anna Burke — and powerful women generally — by Attorney General Nicola Roxon, herself a big mover following the court ruling on tobacco plain packaging.

Independent Tony Windsor flew north on our list claiming Abbott would stop at nothing in begging support for his tilt at the prime ministership during the 2010 election, while overnight Craig Thomson hit our charts claiming vindication by a KPMG review of Fair Work Australia’s investigation into the HSU. 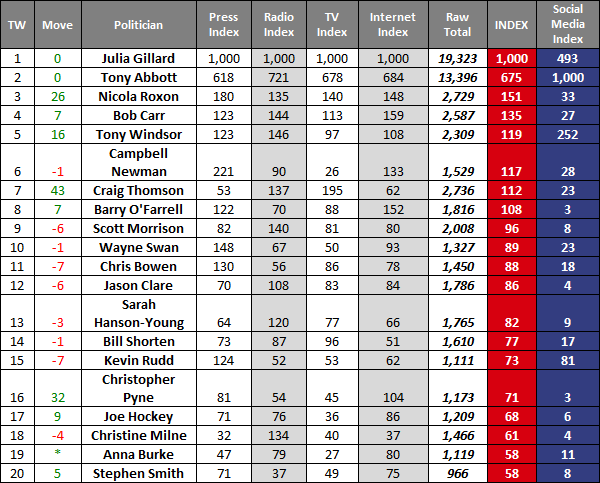 Lots of tweets about Abbott’s dismissal from parliament, and numerous blogs, forums and tweets discussing Windsor’s claims that Abbott begged for his electoral support.

The polarising issue of asylum seekers at the fore once again.