From the Crikey grapevine, the latest tips and rumours … Family ties in Parliament House. There appears to be an interesting if tenuous family connection at the periphery of The Australian’s prominent claims that Julia Gillard may have done something wrong when working at law firm Slater & Gordon 17 years ago. The Oz has relied heavily […]

Family ties in Parliament House. There appears to be an interesting if tenuous family connection at the periphery of The Australian’s prominent claims that Julia Gillard may have done something wrong when working at law firm Slater & Gordon 17 years ago. The Oz has relied heavily on comments by the firm’s ex-equity partner Nick Styant-Browne, who now lives in the US. According to The Oz, Styant-Browne says the firm’s partnership “took a very serious view” of claims about matters surrounding her relationship with AWU boss Bruce Wilson. There’s been a whole lot more stories than that in The Oz, but no matter how hard we look, we just can’t seem to find the smoking gun that Gillard actually did anything wrong. (The PM has denied any wrongdoing.)

Crikey asked Nick Styant-Browne if it was true that he was related to Helen Moreland. He replied: “If it is, I have no idea, and have not spoken to her on a single occasion about politics, let alone her job”. Crikey has tried to contact Helen Moreland but is yet to receive a response.

We’re not trying to allege a conspiracy here — we’ll leave that to The Oz, they do it so well. It sounds like Styant-Browne and Moreland may be unaware of each other’s existence and may have never had contact. We just got curious. Know more about the background to this prominent crusade by The Oz? Drop us a line, and feel free to remain anonymous.

Bauer says Auf Wiedersehen to ACP? Remember The Daily Telegraph’s scoop earlier this month about German conglomerate Bauer Media buying the ACP magazine stable? A deal, we were told, could be completed within days. “Talks are at an advanced stage,” one ACP mole told The Tele. “It is happening.”  Crikey dutifully looked into the story.

But the deal hasn’t emerged — and we hear it won’t. Talk in mag circles is that although ACP remains desperate to sell, Bauer has decided, at least for now, not to buy. The dismal state of the Australian ad market is the company’s big concern.

ALPer returns to The Shire. Stefanie Jones, ALP candidate in Ward A of the upcoming Sutherland Shire Council elections and a former ALP candidate for Cronulla in the 2011 election, again proved her commitment to her community by appearing in last night’s episode of The Shire. No witty repartee this week, just a wave and a smile while dressed as a devil. No truth to the rumour that it’s hell to work for the NSW ALP though … 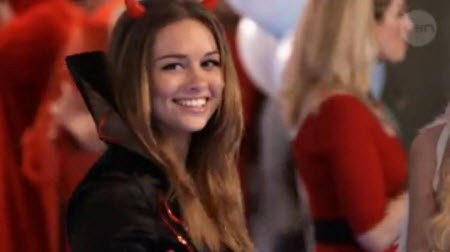 Territory decides. A top-end tipster tells us that with the Northern Territory election coming on Saturday, Labor and its chief Paul Henderson may not be promoting the ALP brand too heavily:

“Labor corflutes have studiously avoided mentioning that brand and have enthusiasticlly promoted Hendo’s team. Overnight in Darwin someone (or perhaps many) have been around sticking Labor stickers on the otherwise plain-packaging posters. Could it be any direct mention of Labor’s brand was perceived to be damaging to the NT party’s health?”

Gifts from the boss. Woolworths has given its store managers an iPad, apparently earning them some cheers from the shop floor. This reminded one Crikey journo of the time they were grandly gifted a large container of Milo while working for a tight-fisted regional daily newspaper. The boss then claimed this was an administrative error and the Milo had to be repatriated to head office, but we stood our ground and kept the Milo (in lieu of a decent salary). So, what has your boss given you? Come one, come all — brilliant and helpful gifts, and the curious, cheap and useless. Drop us a line, and feel free to remain anonymous.

What is a corflute?

So Nick S-B does know “who” Moreland is and what she does?

It’s just that “Is it true you’re related to Helen Moreland?” …….

“If it is, I have no idea, and have not spoken to her on a single occasion about politics, let alone her job”.

Are the motives and political connections of the informants on Julia Gillard’s time at Slater and Gordon really relevant? Surely, finding out the truth or otherwise of the allegations should be the preoccupation of journalists.

Grindrod, if you’ve tried and failed to find any evidence of dishonesty but you want to keep your job then just keep talking. It seems that slack journalists only need to roll over old musty carpets every few months to revitalise their careers. No wonder journalism is stuffed.