Nine and Foxtel seal $1.025 billion NRL deal. At just after 11.30am Nine CEO David Gyngell joined Australian Rugby League Commission negotiating chairman John Grant to announce Nine and Foxtel had again won the rights for the next five years to broadcast the NRL (including the State of Origin) for a total of $1.025 billion.

From a purely commercial standpoint the amount is a huge boon for the NRL; the figure doesn’t include the yet-to-be negotiated rights for the New Zealand broadcasting part of the deal nor the lucrative mobile and internet rights. The existing $1.025 billion includes $925 million cash (of which $90 million is to be paid prior to the first season) and $100 million in advertising.

But what about the fans? The most startling aspect of this deal is that, unlike its fierce rival and commercial competitor the AFL, not every NRL game will be broadcast live. Only one game will be live on Nine each round. For diehard supporters of NRL this is incomprehensible as they look to the calendar and see the year is, after all, 2012. There is also no high definition broadcasting (except for Origin and the Grand Final in 2014). But NRL is a TV game — the most watched sport on the box in Australia — and the NRL’s broadcast partners are protecting their investment.

Two Friday night games remain, including one that must features a Queensland team — to the chagrin of non-Brisbane Broncos supporters as the Queensland powerhouse is often featured in this prime spot due to its incredible popularity and, hence, undeniable ratings pull. Also, for the next five years the NRL Grand final will be a night grand final with a 7.15pm kick off — a key TV spot less preferred by the traditionalist compared to a Sunday afternoon. The new broadcast deal also sees the introduction of 13 Sunday night games which again are less enjoyed by fans compared to television executives. — Leigh Josey (read the full story here)

Fairfax journos down keyboards for stop-work. Fairfax Metro Media staff will walk off the job in a co-ordinated east coast stop-work meeting today. Journos at The Age, The Sydney Morning Herald and The Canberra Times will meet at 4pm to discuss the redundancy program that forms part of CEO Greg Hywood’s decision to cut 1900 positions from the media giant.

In a missive circulated this afternoon by journos’ union the Media, Entertainment and Arts Alliance, staff were told the meeting was “to report on discussion with the company during the current redundancy round”. — Andrew Crook (read the full announcement here)

Front page of the day. In South Africa last Thursday at Lonmin’s Marikana platinum mine violent clashes erupted between workers and police which left 34 workers dead, 78 injured and 259 arrested. Three policemen and two security guards were also killed in the fighting. The arested mine workers are now facing charges. According to today’s Cape Times, South African President Jacob Zuma has “declared a period of national mourning from today until Sunday to commemorate the lives of all South Africans who have died violently — but especially the people killed in ‘incidents at Marikana in the North West province'”. 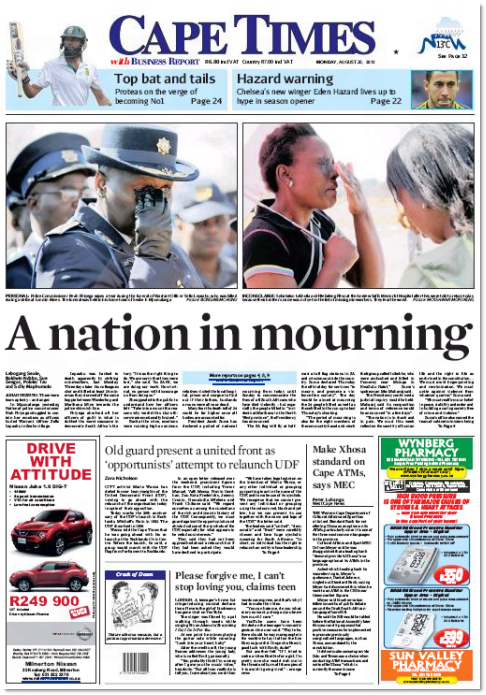 “Consolidated Media Holdings says it expects to sign a deed relating to a $2 billion takeover deal with Rupert Murdoch’s News within six weeks.” — The Age

“A new site which will be dedicated to investigative, public-interest journalism in New Zealand is calling on the public to offer support to help get it “off the ground”.” — journalism.co.uk

“Andrew Cam, executive producer of Everybody Dance Now has left the series according to media reports today, although there is conflicting information about when he departed.” — TV Tonight

“A female Japanese reporter has been killed after being caught in gunfire while covering clashes in Syria’s northern city of Aleppo, the Japanese foreign ministry said Tuesday.” — AFP

That mass murder – not a lot of media focus on what the striking miners have had to put up with, moved as they’ve been, to take this action?
Apparently previously law abiding?

There were white cops there too.