Gillard story top of screen but not of mind 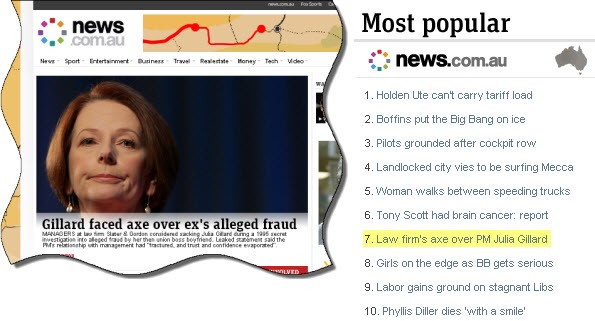 That ranking of what people actually are reading is worth keeping in mind in trying to evaluate the significance of the media interest in the Prime Minister’s past. Many people — probably a considerable majority — are not the slightest bit interested. In so far as the story has registered at all, the likelihood is that it has merely confirmed existing beliefs. Those that like the PM and/or Labor will dismiss it as nothing more than malicious much-raking. Those that don’t like the PM and/or Labor will add it to their list of reasons.

As for actually changing anyone’s opinion or voting intention there is as yet no evidence at all. One opinion poll this week has Labor going forwards a little with another pointing backwards. At this point we could call it a nil all draw and the subject will have to stay in the headlines for a long time yet for that to change.

My experience is that suggestions of scandal — and this story is more a reflection on Julia Gillard’s judgment than anything scandalous — take a long time to have a real impact. And even when they do the result is often not what you might expect. A look at the history of Tasmanian Premier Robert Cosgrove after he faced a criminal trial in the 1940s illustrates that. His popularity went up rather than down as did Spot Turnbull’s a decade later in the same state.

Not, as I have written in these snippets before, that the story is likely to go away. It will smolder along for a long time yet and prove a distraction for the government. But the end result? It is unlikely to prove a significant factor when the next election is finally held.

The Aussie Tim hitting the top of British Labour. Julia Gillard hired a Pom and in Britain Ed Miliband has gone for an Aussie. Albeit an Aussie with some Pommy credentials.

Tim Soutphommasane, drafted into the office of the UK Opposition Leader, might have served some brief time with Bob Carr when he was a Premier and Kevin Rudd during his successful election campaign but he did complete his Doctor of Philosophy in political theory at the University of Oxford, from where he also holds a Master of Philosophy degree (with distinction). Now he has been drafted in to UK Labour’s policy review. 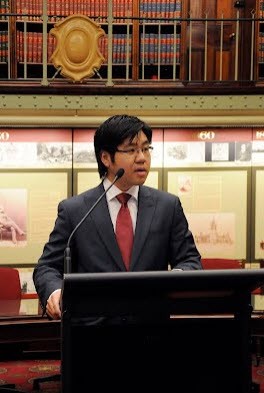 Of Chinese and Lao extraction, and a first-generation Australian, Tim was raised in the southwest suburbs of Sydney. On his website the explains for those curious about the correct pronunciation of his surname, that the phonetic spelling of it is Soot-pom-ma-sarn.

A recent interview for the New Statesman explained Soutphommasane’s thesis, elaborated in his book Reclaiming Patriotism: Nation-Building for Australian Progressives, that the left must promote a common national identity if it is first to win and then retain power. “One of the reasons why you need to have a cohesive, collective identity in any liberal democratic society is that you need to have a sense of fellow feeling in order to redistribute resources.”

Since societies have become more diverse, he said, “You can’t take it for granted that citizens will have an identity in common or will be willing to contribute to the common good, and so you have to work hard to ensure that people feel like they belong to a community.”

In that interview there was also a veiled criticism of the Australian party of which he is still a member.

The Arctic meltdown. With four weeks to go before the normal low point for Arctic ice coverage is reached, data from the Japan Aerospace Exploration Agency shows a new record low is likely. 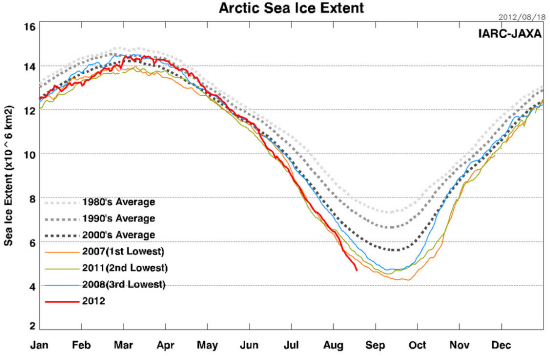 The map shows the spread of the record summer melting. 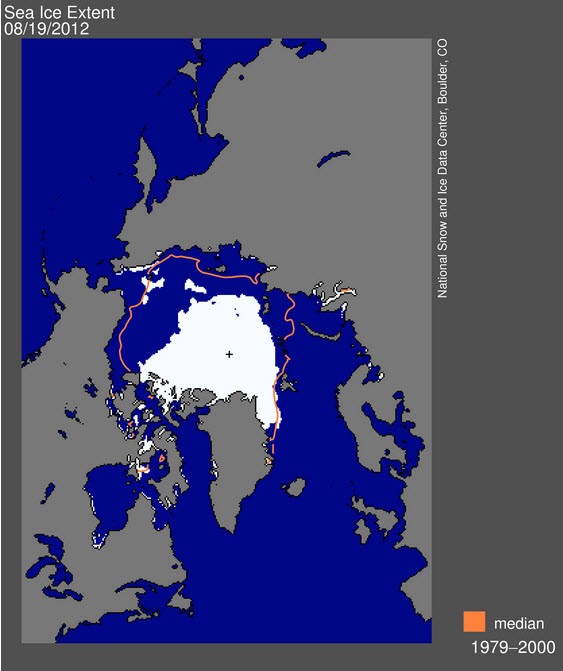 The Oz media is too lazy (and now underfunded) to investigate real news stories so they pick over a stale tale dug up from 17 years ago in the hope there may be some life in it – or, if there is no life, they can insinuate some. Pathetic.

The media need to be reminded they are journalists (allegedly) – not archeologists.

This is a blatant attempt by The Australian to take the attention away from the carbon tax reality being vastly different to the nightmare scenario the coalition preached about for months.

Perhaps The Australian should report more thoroughly on more recent, and MUCH more significant scandals like phone hacking, pay TV smart card hacking (to kill competitors) and how the hell, amongst all this, FOXTEL got approval to take over AUSTAR.

Quick! Someone needs to tell Blot about that Arctic Sea Ice graph. He’ll be desperate to provide his informed and discerning readers a follow up to his earlier efforts here and here.

A little bit of an antitrust case every now and then would be nice.