A new report from Australia's Climate Commission -- led by Tim Flannery -- suggests the way ahead on climate action is a mix of carbon pricing and government intervention.

A new report from the Climate Commission paints a more optimistic scenario of global momentum toward renewable energy while suggesting a mix of carbon abatement methods and voluntary action might become the de facto path toward worldwide emissions reduction.

The report, released this morning by Chief Commissioner Professor Tim Flannery, suggests Australia’s bipartisan 5% reduction target by 2020 places it neither behind nor ahead of other countries in terms of targets, despite our status as the world’s highest per capita carbon emitter. Countries responsible for 90% of the global economy have committed in some form to limit greenhouse gas emission, including 33 with a national or sub-national carbon price; by next year about 12% of the world’s population will live in states with a carbon price, including around 250 million urban Chinese.

The report also describes a surge in global investment in renewable energy, which has grown six-fold to US$257 billion since 2004. That’s led by Germany, which is already a renewables powerhouse and a major technology exporter through a combination of regulation and the EU’s emissions trading scheme, and China, which is on track to become the largest renewables energy market in the world by 2014.

Former Liberal senator Robert Hill launched the report with a less-than-enthusiastic endorsement. He declared it “reasonably well-balanced” but didn’t see as much worldwide momentum as the commissioners did.

Hill also jousted with his former departmental secretary and current Climate Commissioner Roger Beale over the efficacy of regulation versus pricing, having declared he didn’t support the Gillard government’s carbon price. Hill cited the fact that some forms of renewable energy, like solar PV, were becoming dramatically cheaper than forecast because of regulation and government intervention. “We were told in cabinet these were uneconomic,” he said.

This picked up one issue that is apparent in the report: the quest for a global, pricing-based carbon abatement mechanism appears increasingly unlikely while countries opt for voluntary commitments delivered by a variety of means. Of a variety of economies discussed in the report — including China, the US, the EU, Russia, India and Japan — most had a sub-national or national carbon price either in operation or planned, but all had a renewable energy target, all had energy efficiency regulation and most had vehicle emission standards. 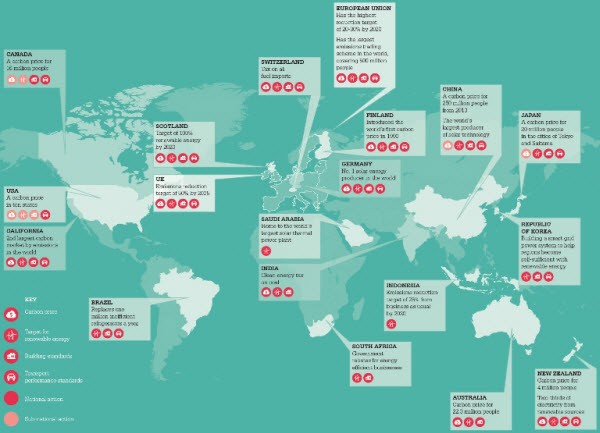 The report also noted an International Energy Agency finding that around 65% of the abatement task to prevent global temperatures from rising by more than 2 degrees could be achieved through energy efficiency, suggesting “we already have the technologies we need to tackle climate change”.

Hill appears sceptical of the chances of an international agreement, while Beale’s view was that we maximised the chances of securing such an agreement by fulfilling our own commitments.

But the real debate appears to be around how to deliver commitments, rather than the binding nature or otherwise of international agreements. For all the relentless focus on the government’s carbon price, in fact much of the heavy lifting of renewables investment between now and 2020 will be driven by the Renewable Energy Target, government assistance and, if it survives, the Clean Energy Finance Corporation, rather than the carbon price.

The example from the rest of the world appears to be not a simple choice between an economically-pure carbon price and government intervention, but a mix of both.

Bernard Keane simple minded people like I am, perceive this whole international media managed political struggle to be about how to harness all the simple minded people like me, all around the world. Peoples who still trust all our governments and politicians to be exercising their influence in the best interest of all their constituents. We the peoples need to look closely at the dollar cost to peoples world wide. The report, released this morning by Chief Commissioner Professor Tim Flannery, suggests Australia’s bipartisan 5% reduction target by 2020 places it neither behind nor ahead of other countries in terms of targets, despite our status as the world’s highest per capita carbon emitter. The words international corporate con job comes to my mind. Edward James 0243419140

The future climate is under threat from the carbon we emit. The goal of any responsible environmental movement should be to eliminate carbon emissions, not to make token reductions. At the same time, a thriving economy requires a reliable supply of copious energy. Clearly it needs that energy supply of non-carbon energy.

A carbon tax is entirely on path toward providing those copious non-carbon energy supplies. As alternatives to carbon become available, industry and marketplace move away from carbon-based sources of energy.

We don’t have the privilege of that timescale any more. We have already run out of places to put our waste. The greenhouse is full. We cannot afford to emit any more carbon, not even as backup to wind and solar.

Don’t encourage the faithful. We need serious solutions to a serious problem.

Australia does have a mix of both. To choose a current example, the hot water heaters used by the Belair Hotel can’t be installed on new premises due to state government regulation; and they are priced to be more expensive than alternatives for existing installations thanks to the federal carbon tax and state government rebates on alternatives.

Your view that Australia doesn’t currently have a mix of policies isn’t correct.

I can’t think of any proponent of the carbon pricing who thinks it is all that is required, simply because there are plenty of cases of market failure. But the tax is important as it gets a lot of the heavy lifting done in an economically efficient way. The alternative is pure regulation, and that’s often not economically efficient (although, rather oddly, it is the current policy of the Liberal Party).

Both taxes and regulation suffer from evasion, and I’d suggest that we’re about to see a lot of that. One of the good points of the carbon tax targeting only high emitters is that is makes a lot of evasion difficult as it’s not too difficult to comprehensively audit the emitters. Whereas what we’ve seen with more broadly based schemes (insulation, PV solar) is that poor behaviour is rife.

The report is heavily biased in its view of low-carbon technologies. Reading it gives no inkling that ‘renewables powerhouse’ Germany is building a dozen coal-fired power stations and ramping up natural gas to keep the lights on, nor that the EU, India, Brazil, Canada, Indonesia, Korea and South Africa (all listed in the Annex of individual country action) all have significant nuclear power programs. Over four times more low-carbon electricity is generated by nuclear globally than by non-hydro renewables. Yet ‘nuclear’ is mentioned less than a dozen times in the document, while ‘renewable’ appears hundreds of times and has whole sections devoted to it in every chapter.

It manifestly fails in its brief to examine ‘action being taken to tackle this
global challenge’ of climate change.

Maybe a better way to “internationalize” carbon reduction programmes would be to replace a cabon price with a carbon cost. Not a levy or something similar paid in-country, but a right for lower per capita nations to apply tariffs against products with high emission factors emanating from developed countries (it’s probably best to leave the developing countries out of this stoush, for now; either they will profit abnormally from a free pass on emissions reduction andgrow from such an exemption, which will eventually land them in the developed category, or they won’t progress that much, which will keep their emissions relatively low.

Free-traders will object, but in effect this approach would level the playing field for trade: countries which have invested in reducing emission reductions will be advantaged; those who haven’t bothered will have a carbon emissions cost attached to their exports.

Of course, some major countries will object violently to this, but if a large enough group of countries decides to work this way, then ultimately there will be a rush to join, rather than be left out. Plenty to be negotiated in something like this, but nothing more than a sort of multilateral free trade agreement for those who opt in. The WTO already allows discrimination in trade on certain environmental and health grounds