Kim Williams has seen the future -- and it's got a tattoo, a handlebar moustache and a CV long enough to stretch from one end of Holt Street to another.

Kim Williams has seen the future — and it’s got a tattoo, a handlebar moustache and a CV long enough to stretch from one end of Holt Street to another.

Crikey understands that News Limited’s CEO has convened an ongoing academy to help his most senior employees embrace the opportunities of the digital age. Newspaper editors, executives and sales and marketing heads from across the country come together for regular sessions. News’ head of editorial Campbell Reid and The Australian‘s editor-in-chief Chris Mitchell are among those involved.

The course has been designed by the Boston Consulting Group, the business strategy firm at the heart of the dramatic overhaul Williams announced in June. The classes are, by all accounts, excellent, with participants enjoying the opportunity to break out of the permanent present and ponder the long-term trends reshaping the media industry.

One of the key texts News Ltd big wigs have been assigned is 64 Things You Need to Know for Then: How to Face the Digital Future without Fear, written by British technologist Ben Hammersley. The Hercule Poirot lookalike may not have a big profile in Australia but he’s certainly an accomplished chap. Hammersley is editor-at-large of Wired magazine, British PM David Cameron’s ambassador to Tech City (London’s Silicon Valley) and a former war correspondent for The Guardian. He also, legend has it, invented the word “podcast”. 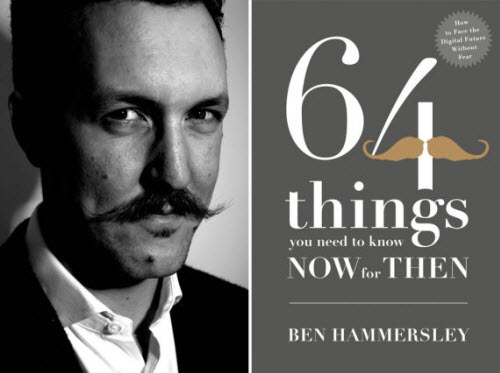 The Financial Times, in an unusually breathless review, described 64 Things as a:

“… whistle-stop tour of the digital world and its implications for modern life. Billed as an accessible guide for novices and technophobes, the book’s sheer scope means it also provides plenty of mind-fodder for the tech-literate … The book’s breadth and pace means you can feel your mind expanding with each page.”

The Telegraph was not as impressed, complaining that Hammersley’s habit of flitting from one topic to the next makes one feel “like you’re being bombarded by a bright but hyperactive child”.

Among the stylish soothsayer’s more radical ideas is that of a “spime” — an object that is now only an idea but could soon become reality. A spime, Hammersley explains, “can interact with the world by tracking its own process of production and by gathering information about its usage. Essentially it’s a self-documenting object.”

In another chapter, Hammersley muses on the relevance of “Shanzai” — knock-off products produced in China that often improve on the original — to the digital age.  Elsewhere, he notes “the internet destroys every business that enters its sights and remakes it in its own image”, “the internet augments real space, it doesn’t replace it” and that “everything is a work in progress [and] we are increasingly comfortable with the provisional”.

Hammersley, of course, isn’t the only digital guru going around. Earlier this year, BuzzMachine founder Jeff Jarvis, who was in town for the Sydney Writers Festival, visited Fairfax’s Pyrmont HQ to talk strategy with the company’s digital head honchos.

Not that they took his advice on board: only weeks after meeting with the arch paywall sceptic, CEO Greg Hywood announced plans to charge online readers for access.

A hipster is perfect for the job. They often meet the description Vice gave to rich girls:

“ At some point in the relationship, despite her bohemian pretensions and transgressive art project, you’ll realise that she is a Tory. Listen out for tell-tale opinions like, “Well I don’t see why I should have to give away all my money to other people,” and “Daddy didn’t go on the dole, he went out and started a company / formed Duran Duran.””

The Telegraph received a mention. Am I the only one who has noticed how bad its on line work product has become? It presents like no one really cares anymore. Edward James

“Spimes” were invented/coined/theorized by Bruce Sterling in 2004, and are not Hammersley’s idea at all. My impression is that just about everything attributed to Hammersley in this article is recycled Sterling.

Oh, I credit Spimes to Bruce very heavily, don’t worry. There are 64 concepts in the book, hence the title, and all of them get their proper histories told, as they’re being explained.

You have a magnificent moustache Mr Hammersley. Just putting that out there.