Newsroom unrest on Newsroom ads? Nothing illustrates the desperation of newspapers to preserve a skerrick of their dwindling revenue than pages two and three of most of the nation’s newspapers this morning. For News Limited tabloids The Daily Telegraph, The Courier-Mail, The Advertiser and The Mercury, the union-backed Industry Super Funds have splashed with double-page spreads at an estimated cost of $50,000 a pop … 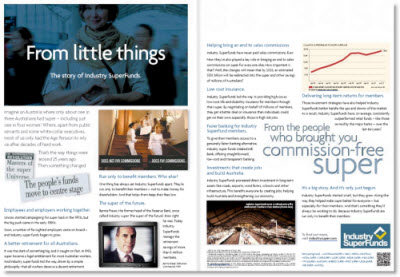 But broadsheet fans can’t escape ad blitz either — The Sydney Morning Herald and The Age have splashes for Foxtel’s delayed airing of The Newsroom (most Newsroom fans have watched it on Pirate Bay). Fairfax’s more high-minded journalists wouldn’t have liked seeing that in their papers today … 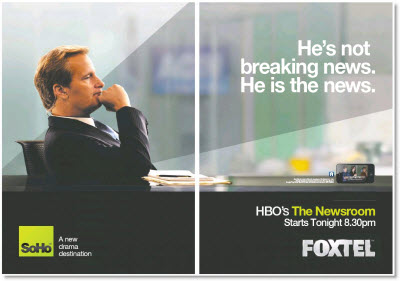 Amazingly, the only daily capital city papers without ads on the inside cover pages are The Canberra Times and the NT News. Welcome to the future. — Andrew Crook

Labor’s class of ’04 remembered in print. With the Australian Workers’ Union’s 1994-95 factional machinations all over the news, Crikey thought it pertinent to cast an eye over some of its in-house journal’s archives. This amusing autumn 2004 edition of The Australian Worker contains the column “Bright Young Things”, assessing the talents of some of the Right’s most talented prospects.

For Richard Marles, former ACTU assistant secretary and now federal member for Corio, there is no chance of him ever running for Corio. Marles “dismisses rumours of standing for the federal seat of Corio,” the Worker reports. “Canberra is very hard on families. I am very happy here [at the ACTU]. It’s all too far in the future to be relevant.” (He was elected in 2007.)

What about John Robertson, the NSW Labor Council secretary turned NSW opposition leader? Could he envisage a future in politics? Not really. “I’m staying here for another four or five years, “Robertson says (true to his word, Robertson was elected in 2011).

For rising HSU stars such as Kathy Jackson, Parliament is also viewed with scepticism. Representative chambers should not “be a dumping ground for former union officials to get them out of the way”. But Jackson, who had failed in her bid for an upper house seat of Silvan eight years earlier, and would jostle for preselection in Northcote two years later, leaves the door ajar: “If we’re able to represent our members and have been successful union officials, then if a choice at some point is Parliament, it’s a choice that has to be looked at.”

The other AWU profilee who hasn’t yet entered parliament is former Queensland ALP state secretary Cameron Milner. Milner was keen to keep agitating for the rights of working people: “That doesn’t change, whether you’ve got a Labor government or not.” Unfortunately, working people seem to have momentarily slipped from Milner’s gaze: he’s now a lobbyist for Rio Tinto and Gina Rinehart. — Andrew Crook 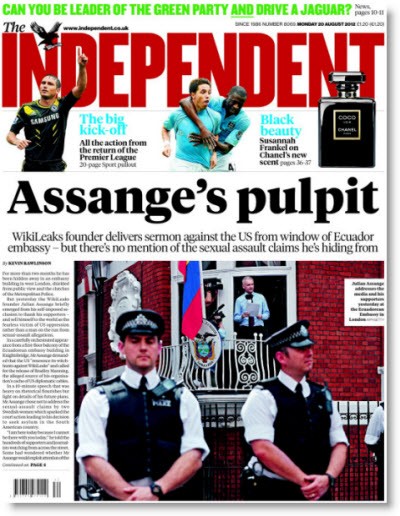 The Department of Corrections. Saturday’s Melbourne Herald Sun managed to get the names of two Hawthorn AFL players, Cyril Rioli and Jarryd Roughead, very very wrong in a report, hilariously using Cereal Oriole and Dared Aroused instead. They apologised the next day.

“A Nine News crew was caught in a pile-up involving at least six cars on Sydney’s M4 motorway after a driver suddenly braked to a halt on an off ramp. ” — NineMSN

“Ten has confirmed MasterChef Australia will have a new home at the Melbourne Showgrounds, from 2013.” — TV Tonight

The struggle for independence for Bulgaria’s media

“The European Commission has vowed to monitor media freedoms closely in Bulgaria, where rival political and business groups have taken control of top news organisations and used them to promote their interests. ” — The New York Times

At least they didn’t call him “Squirrel Areola”?

re “The struggle for independence for Bulgaria’s media”. It appears they are fighting the battle we have already lost.

For rising HSU stars such as Kathy Jackson, Parliament is also viewed with scepticism…. LOL. Is this the same Kathy Jackson who was guest of honour at the latest HR Nicholls society evening? The one who knifed the ALP’s Craig Thompson, and the one who is engaged to Michael Lawler, Tony Abbott’s BFF? Which party would endorse her? The ALP? Oh dear, my sides are hurting….can’t see through my tears of laughter…

Now it looks like she’s chasing a Liberal seat – “for services rendered” – so she can “put her feet up” for good?