From the Crikey grapevine, the latest tips and rumours … CarbonWatch: creative Coalition. Is the carbon tax to blame for the disappearance of Harold Holt? It seems to be responsible for just about everything else. A tipster was annoyed to get a pamphlet from Victorian Liberal Senator Scott Ryan recently, which warned Australia had “THE WORLD’S BIGGEST […]

CarbonWatch: creative Coalition. Is the carbon tax to blame for the disappearance of Harold Holt? It seems to be responsible for just about everything else. A tipster was annoyed to get a pamphlet from Victorian Liberal Senator Scott Ryan recently, which warned Australia had “THE WORLD’S BIGGEST CARBON TAX: pushing up prices on everything, especially electricity, grocery and healthcare costs”. The pamphlet featured this image: 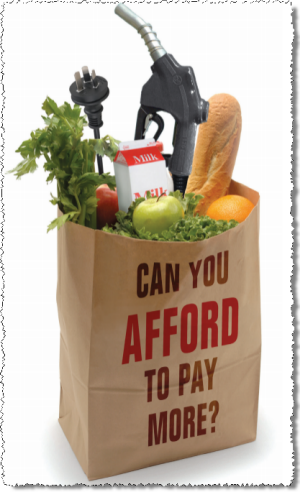 The pamphlet’s recipient dashed off a missive to Senator Ryan, and CCed us in (and here at Crikey we do love to be CCed in; do bear that in mind):

“The entire flyer is an exercise in misinformation, negativity and scaremongering, much like the Liberal party’s entire philosophy under Abbott. There are specific lies which I object to (i.e. the “worlds biggest carbon tax” “pushing up prices on everything” despite us having seen that this is patently untrue, and cost of living pressures are actually at historically low rates), but what I would specifically like to draw your attention to is the petrol pump. No doubt, since you are an Australian Senator who read the carbon bill before it was made into law, you are well aware that petrol is exempted from the carbon tax.”

We’ve looked at the TD Securities — Melbourne Institute Monthly Inflation Gauge for July (the first month of the carbon tax), and found monthly inflation rose by “only 0.2%”. Automotive fuel actually fell by 2.7%. “Food prices … so far remain unaffected” by the carbon tax. And yes, petrol is excluded from the carbon tax entirely.

So, “can you afford to pay more” on these grocery items? Well, for some of the items it’s an academic question. You’re not.

It’s worth noting that Senator Ryan is the Coalition’s spokesman on small business and fair competition. A spokesperson for Senator Ryan said the ad reflected the fact that “according to Kleenheat Gas and Supagas, the price of LPG will increase due to the carbon tax”. But Crikey’s resident rev-heads say the image is of a petrol nozzle, not an LPG nozzle. The Senator also said this:

“Freighters have advised customers that they will be passing on a carbon tax surcharge. The price of refrigerant gases have gone up by 400 per cent in some cases. These increases must be factored in by all businesses that use electricity, require refrigeration or sell goods that need transportation. This cost is then passed on to customers who buy milk, bread, fruit, vegetables and meat.”

We took those claims to The Climate Institute, who suggested the carbon tax does not affect freight transport at present (it may do after 2014, but that is not yet decided), and does not affect LPG for transport. It certainly does push up the price of refrigerant gases, but one company has been pulled up by the ACCC for overstating the effects, prompting ACCC chairman Rod Sims to warn that “businesses must carefully consider the basis for any pricing claims to ensure such claims are truthful and have a reasonable basis”.

Never let it be said that here at Crikey we don’t try to lend a hand. We took it upon ourselves to improve the Coalition’s ad to more accurately represent the impact of the carbon tax on grocery items, according to available inflation data. Senator Ryan can thank us later. 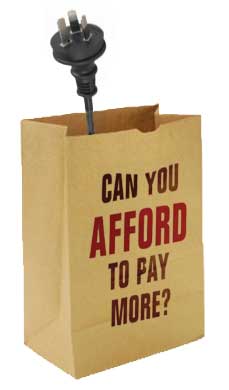 So should political parties have a “truthful and reasonable” basis for their pricing claims, too? If you’ve got any thoughts on whether this ad breaches any rules, please let us know.

Close to home. Last week, Janet Albrechtsen called for AOC boss John Coates and IOC heavyweight Kevan Gosper to quit. In the article she bagged Gosper as being part of a gravy train because his daughter ran with the Olympic torch. And where is Sophie Gosper now? A journalist at The Australian.

“Buy your degree”. Crikey continues to receive plenty of complaints about standards at Australia’s allegedly “world-class” unis, following on from a story and some tips last week. A common theme is of academics being told to pass students (many of them international students) who submit poor work or plagiarise, to keep the fees rolling in.

Here’s an example from a former lecturer at the University of Queensland, marking an international student at masters level:

“This student had virtually cut and pasted her entire 2000 word assignment, possibly with the grand total of 400 of her own words. She had not even bothered to format into the same text. Submitting to Turnitin anti-plagiarism software wasn’t even necessary, though it confirmed what a cut and paste back into Google did.

As should be expected in a case of what is supposed to be the most heinous of all academic crimes, I gave her a zero, wrote “plagiarised — see me” on the bottom and wrote in some of the links where I found her content. I was then contacted, hauled into manager’s and committee meetings and asked why she hadn’t passed. It was because I hadn’t taught her about plagiarism, she wasn’t to know, any failed marks were not due to students and entirely rested on me. Every student had to pass, after all, “good teaching that prepared students well for assessment” was what the university was known for. I was told that plagiarism did not reflect well on the school, and surely there were some redeeming parts of the essay. I was never asked to teach that subject again.

I saw the same thing happen to domestic and international students, meaning that masters students were handing in work that I shouldn’t have passed in high school getting through.”

And this from an ex-tutor at “one of the sandstone universities”:

“There was constant pressure from the non-teaching staff in the faculty to pass students who were just not up to the grade “because this is their third go, it’s a compulsory unit, and it’s already cost them $40k”. This was particularly apparent for international students, whose IELTS scores do not seem reflective of their ability to comprehend what’s happening in a class, let alone write a short essay. The new anti-plagiarism software many unis use makes the problem even more stark. The software identifies what per cent of the essay isn’t original. We got one submitted that was over 90% plagiarised from www.buyessay.com or essayprofessors.com. We were told it would be dealt with “very seriously”, would involve the dean, etc. As far as I’m aware, the student got passed in the unit and will graduate with a degree from a prestigious university. Buy your degree, one essay at a time.”

We’ve heard so many of these anecdotes that we’d like to take it further. Can you send us excerpts of students’ essays that you’ve been instructed to pass, despite them being of a very poor standard? Contact us here.

Exclusive: Fin takes the lead. Here at Crikey we do love to compare the daily duel between The Australian and The Australian Financial Review for the most “exclusive” tags on their stories. Usually The Oz sets the pace, but today’s Fin is something else, with seven exclusive tags. Two of those tags relate to the same story, which is promoted on page one and then appears in the business section, both versions adorned with red “exclusive” tags. Cheating!

The Oz was left behind today with only six exclusive tags (we’re confident the paper will lift its exclusive quota for tomorrow). One of those relates to this story, which was mainly covered by the ABC, among others, back in June.

Albrechtsen got that one wrong l. Sophie did not run with the torch after a media outcry.

Universities were once places that took pride in that they made you think. It appears these days the people who run them have not even learnt that lesson.

Master’s Degree, well-known uni, foreign student in a work team. Assignments handed out, roles negotiated for individuals, along with receivables, scope, etc. This was a major issue, because the sum of the parts was 100% of the assessment.

Said student emailed from South America that she had just been married and was on her honeymoon, apologising for asking the others (3) in the team to make up for her.

Long story short: 3 passes, one “Nul Points”, as they say on Eurovision.

The uni did the correct thing, right down the line.

See, not all stories are bad news.

Well you really can’t fault Daddy Gosper for taking care of his kids, can you? What was that scandal a few years ago where he allegedly used his influence to get one of his kids into the University of Melbourne?

The Victorian Ombudsman had something to say about it:
http://www.ombudsman.vic.gov.au/resources/documents/Report_on_investigation_into_a_complaint_about_preferential_treatment_of_a_student_by_Melb_Uni.pdf

Hard to believe he’s into the Olympics where it’s supposed to be competition based on emrit (natural skill plus training), when he wants to advance his kids by influence not talent.