Watch out Paul Kelly and Peter Hartcher: there’s a new political pundit in town. Former Treasury mole Godwin Grech has emerged from his hole. Plus other media news of the day.

Godwin Grech, political pundit. Watch out Paul Kelly and Peter Hartcher: there’s a new political pundit in town. Former Treasury mole Godwin Grech has emerged from his hole this morning with a Sydney Morning Herald opinion piece that is, at times, literally jaw-dropping in its levels of chutzpah.

Grech, unsurprisingly given his history of leaking to the Libs, is no fan of Julia Gillard’s government. Following swipes at the PM, the press gallery, the ABC, Fairfax and the public service, Grech bares his fangs at Malcolm Turnbull. The member for Wentworth, Grech says, has been the target of “faux love” from the Left:

“The simple truth, however, is that Turnbull’s days as leader of the Liberal Party are over. The reasons for his leadership failure are well documented. Even if some elements have been deliberately exaggerated to disguise various flaws.”

What “elements” could he be talking about? Perhaps the ute-gate scandal of 2009, where Turnbull’s credibility was damaged by his decision to accuse the Rudd government of corruption based on an email forged by Grech. Grech then fantasises about a future with Tony Abbott as PM and John Howard as governor general.

But, in a promising sign for his future as a pundit, he saves his best for last by calling for a more transparent and accountable public service. This, some wags noted this morning, is akin to Ivan Milat calling for better tourist control, Matthew Newton for more chivalry or Jodie Rich for better corporate governance.

Assange charged, yet again? It appears some Australian journalists are struggling with basic ideas about criminal justice, even of the variety practised in Sweden. One of the most common misapprehensions about Julian Assange is that he has been charged with s-xual assault in Sweden. This is not the case; Sweden is seeking his extradition merely to question him. British newspapers have been slowly accepting this: The Guardian, which has conducted a long-running smear campaign against its one-time ally, finally and reluctantly accepted in July that he had not been charged and committed to stop claiming he had. In April the Daily Mail was forced to publish several corrections about this and other Assange matters.

Not so in Assange’s home country, however. Last night, 7.30’s Leigh Sales claimed that the UK “is determined to extradite Julian Assange to Sweden to face r-pe charges” and the ABC has since published a transcript of the program without any correction. Neither the ABC nor Sales responded to extensive criticism on Twitter about the error.

This morning, 3AW’s website, on the page for an interview with former diplomat Bruce Haigh, referred to Assange facing “s-x charges.” But 3AW has since corrected its page during the morning, and now refers to “serious s-xual accusations.” 3AW 1, ABC 0 in the accountability stakes. — Bernard Keane

Headline of the day #1. Via Ryan Smith on Twitter: 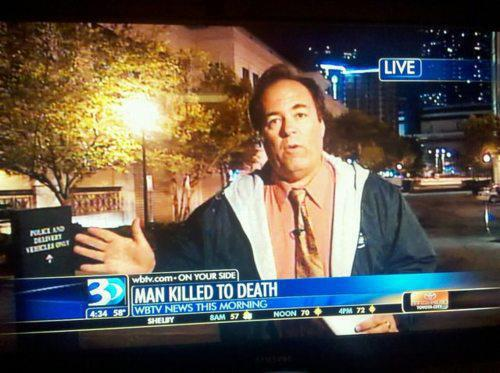 Headline of the day #2. From today’s Financial Times front page: 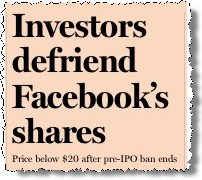 Front page of the day. Ecuador’s Hoy newspaper covers the standoff over Assange at Ecuador’s London embassy; the headline reads: “Assange case: the tension with London is rising”. 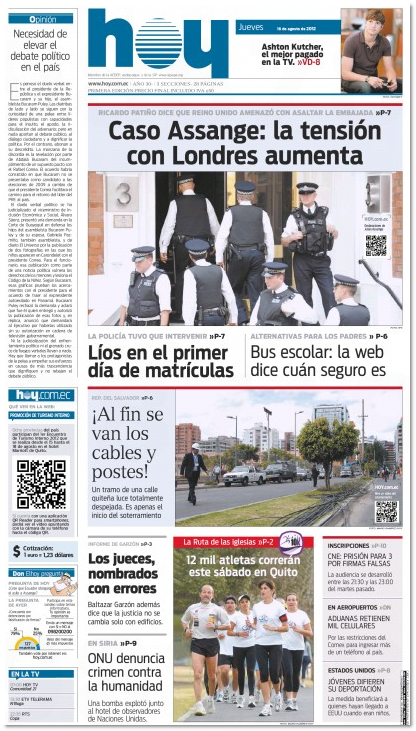 “The decision by the ABC to drastically cut back live television coverage of the country’s two main women’s national leagues has been labelled as discriminatory and s-xist by the Melbourne-based Australian Womensport and Recreation Association. ” — The Australian

News pushes ahead with ‘superdesk’

“News Limited’s restructure has continued with the creation of a new ‘seven-day superdesk structure’ for editorial in Victoria while a reported 45 photographers are to be made redundant nationally.” — mUmBRELLA

“At a time when most Western broadcasting and newspaper companies are retrenching, China’s state-run news media giants are rapidly expanding in Africa and across the developing world.” — The New York Times

How USA Today used headline testing during the Olympics

“The USA Today sports team used headline testing for its Olympics reports to find how headlines resonated with its audience, according to analytics firm Visual Revenue.” — journalism.co.uk

“Faircrax”? “Grech on the payroll” is all right : but Reinhart on the board would not?

When I saw Grech’s column (which I didn’t read) I thought it was April 1. At the time of writing his piece has attracted more than 270 reader responses. If Fairfax’s aim is to generate website traffic it has succeeded. I can’t imagine what else it was trying to do.

Grech, a man with a remarkable record. The transcript of his memorable appearance before the Senate Estimates Committee is available and forever archived. Personally, I wouldn’t buy a used car from him…especially a ute.

Yes, Leigh Sales and the ABC are misrepresenting Assange. No apology or correction. He hasn’t even been questioned by the Swedes, let alone charged. When in Sweden he made himself available to authorities- and they told him he was free to leave.

Nothing to stop the Swedish investigators visiting Assange in Mayfair…but of course we know why not.