The Northern Territory election campaign is heating up, with a senior staffer for Chief Minister Paul Henderson standing aside today after threatening The NT News with legal action over an election story. Labor is currently tipped to win the poll on August 25.

Henderson announced today that his deputy chief of staff, Jamie Gallacher, would go because he had “let him down” and “exceeded his authority”.

The croc-loving Darwin newspaper has been engaged in a battle with Henderson’s office over a story on a Labor candidate having a past assault conviction, a story which many in the NT regard as beat-up.

Under NT law, consent is required to report on spent convictions. However, a week ago Henderson said that candidates should be honest with any criminal history.

Ken Vowles, a Labor candidate for the seat of Johnston, was charged with assault back in 1992. The NT News contacted Vowles to seek comment for its story. Vowles agreed for the story to be run. Gallacher then phoned Matt Cunningham, editor of The NT News to voice legal worries if the story were to be run. In response, Cunningham declared that he would run a blank front page with a “Censored” headline splashed across it. Gallacher tried to get The NT News to hold the story, but eventually said that Vowles would allow it to run.

A furious Henderson attempted to distance himself from the breaking scandal, denying he had any involvement in threats to The NT News. In a written statement released today, Gallacher said:

“After speaking to Mr Cunningham I had a conversation with the Chief Minister who said that it would be wrong to try to use legal arguments to suppress the story and that The NT News should be able to publish without fear of legal action. However, I continued to argue with Mr Cunningham about the story and in doing so I exceeded my authority and exposed the Chief Minister to unnecessary embarrassment and speculation by The NT News. I wish to make this point crystal clear, at no time did the Chief Minister say or direct me to say that this story should be withdrawn.”

Gallacher has withdrawn completely from the campaign and taken leave from his position. Gallacher is known for his prickly disposition but is well-regarded as a combative political operator, and is married to NT Supreme Court Justice Jenny Blokland. He’s been a long time Labor advisor in the NT. He was a senior adviser to former chief minister Clare Martin in 2007 when her government published the Little Children Are Sacred report, which outlined the sexual abuse of Aboriginal children.

When that report was released, Martin contacted then Prime Minister John Howard to say her government would formulate a response in six weeks. As Howard said at the time “I got a very general letter today saying, ‘Well, we’ve had a look and we are getting ready to say something about it and we’ll be happy to talk to you … Well, I don’t think that’s a government that regards this as an urgent problem.” Howard announced the NT Intervention without any consultation with Martin and the NT government.

Gallacher also served as an advisor to former NT education minister Marion Scrymgour in 2008 when Scrymgour sacked her department CEO Margaret Banks, just seven weeks after she’d been reappointed. Shortly afterwards Scymgour was moved away from the education portfolio.

It was Gallacher who has previously replied to Crikey‘s request for comment from the NT government with: “We do not answer questions from bloggers on random electronic gossip sites – the Minister’s office deals with reputable media outlets”.

One thing is black and white, NT Labor’s time is up 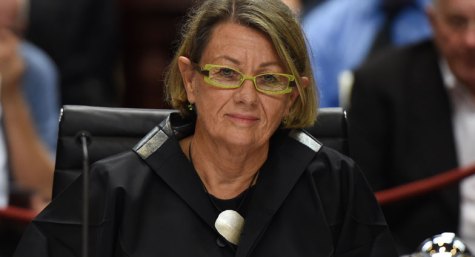 Ooh Amber! What a stunning compliment.
You’ve just been promoted from a mere Crikey hack,
to an actual blogger on a random electronic gossip site.
I trust Mr Beecher has given you a raise.

That’d cut down on workload of the ministers office by a buttload given there are so few left here now….

Thats rich politicians are on record poaching hacks to run spin for them. The sort of spin politicians rely on to keep their constituents in the dark. I dropped a subscription to the smelly so I could pay for better access to Crikey.com.au Edward James

Labor always threatens the media, from Gillard down.

Amber, I have a couple of questions; 1. Are you in Darwin covering the election? 2. Your assertion ‘a story on a Labor candidate having a past assault conviction, a story which many in the NT regard as beat-up…’ How did you come to that conclusion? 3. You are aware of NT Labor dredging up the criminal past of the independent candidate Peter Rudge only a week before the proverbial was on the other foot, as reported in the NT News print edition? – James Dunlevie, NT News