Smith v Murdoch: an exercise in vanity. Dick Smith likes to remind everyone that he was “hopeless” at school. It’s a claim few would dispute. But the unspoken message behind his boast is that education — and, by inference, educated people — can’t really know much because he quickly went on to become a millionaire.

It’s this anti-intellectual streak that seems to motivate much of Smith’s current scattershot campaign against over-population, foreign ownership, and — without a hint of self-knowledge — what he calls “the widening gap between rich and poor”. What is it about wealthy, middle-aged, self-made men that makes them think (once they’ve made their pile), that they know what’s wrong with the world and how to fix it?

And they’re never reluctant to use their money as a megaphone. Today’s Sydney Morning Herald, Age and Australian Financial Review included a glossy, full-colour, 28-page insert titled Dick Smith’s Magazine of Forbidden Ideas That You Won’t Read About in the Mainstream Media. Even in today’s depressed print market, this curious offering must have cost a small fortune in production and insert charges. — David Salter (read the full story here)

Ad revenue for regional newspapers slumped by 29.8% while magazines weren’t much better, suffering an 18% year-on-year decline. Online display advertising, long a strong performer, suffered a surprising 12% drop — the first fall in three years. Cinema and pay TV were the stand-out performers, growing by 30.5% and 18% respectively.

The SMI measures ad spending through media agencies — which makes up around half of all newspaper ad revenue — but does not include classified or direct advertising. The overall agency ad market fell 7.2% in July, the largest drop since September 2009. — Matthew Knott

Murdoch internal memo: we’re on track. Rupert Murdoch has sent an internal memo to News Corporation staff updating the company’s review of compliance with bribery laws. He writes: “I assured parliament and the Leveson inquiry that we would move quickly and aggressively to redress wrongdoing, co-operate with law enforcement officials and strengthen our compliance and ethics programme company-wide. With the support of our board of directors, I am pleased to tell you that we have made progress on each of these important steps.” Read the full memo here …

Is High Court ruling front page news? Yesterday’s High Court ruling paving the way for the introduction of the plain packaging of cigarettes in Australia sent shock waves through the tobacco industry and made headlines in Australia and around the world. Locally, today’s Fairfax papers The Sydney Morning Herald and The Age led strongly with the story. It also appeared today on the front pages of prominent international newspapers such as the International Herald Tribune, South China Morning Post, San Francisco Chronicle, Hindustan Times and the Bangkok Post so far. 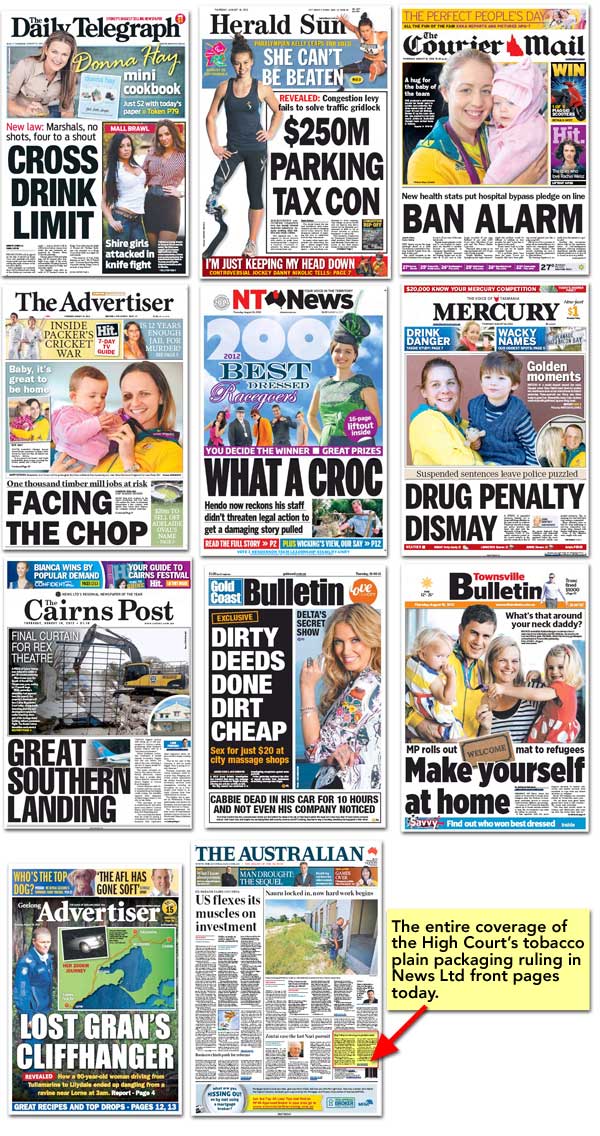 The Australian devoted a 62mm high x 88mm wide article on the bottom right hand side of its front page today on the story. As a percentage of the total available space available to News Limited in its front pages this represents 0.042%. We wonder why. — Leigh Josey

Front page of the day. Meanwhile, on a stretch of the East China Sea lies the Diaoyu Islands where currently an international row is brewing between China and Japan as 14 Hong Kong activist landed on the sought after islands, embarrassing Tokyo and raising tensions between the two countries: 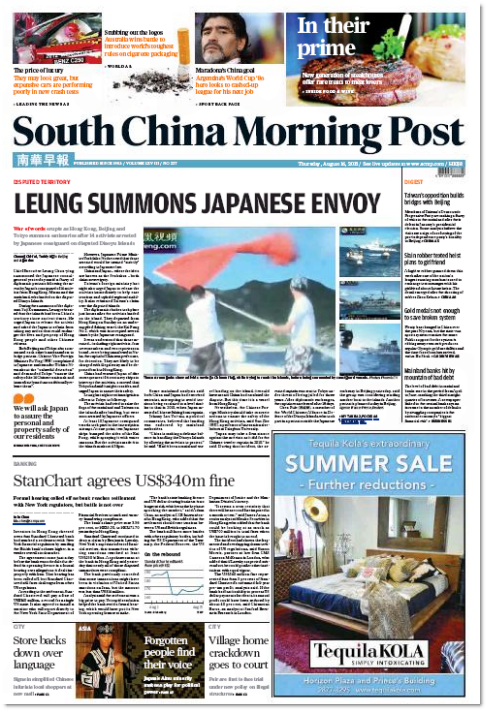 “News Corp says its general counsel, Gerson Zweifach, has been designated the company’s chief compliance officer, in charge of a review of its anti-corruption controls. ” — The Australian

“The world’s biggest picture agency, Getty Images, has been acquired for $3.3bn (£2.1bn) by the private equity firm Carlyle Group.” — The Guardian

“Cleo has been targeted by a protest group which wants the young women’s magazine to stop Photoshopping images of girls.” — mUmBRELLA

“The Reuters news agency says hackers have broken into one of its websites for the second time in two weeks and posted a false story saying Saudi Arabia’s foreign minister had died.” — Huffington Post

Simple explanation? Limited News “plain packaging of Gillard/Labor victories”?
If this was a Conservative/Howard/Abbott initiative what do reckon they’d do to publicise it? Devote a “full front page to their win for national health”? Too Right?

Of course the High Court decision concerning plain packaging of cigarettes would have gone prominently on the front page of all the News Limited newspapers … if it had gone the other way against the federal government, providing yet another stick with which to beat the Labor Party.

“On track”? The same track they were on, tracking down that “rogue reporter”?
And the cost of those sort of smoke-screen-signals would be getting cheaper – with less on the mail-out list?

The High Court plain packaging decision was a lead story on Germany’s international TV outlet ‘The Journal ‘ on 16 August .

News Limited should starts at the basics and enforce it own Code of Conduct. Just the first rules under ACCURACY would suffice.

1.1 Facts must be reported impartially, accurately and with integrity.

1.2 Clear distinction must be made between fact, conjecture and comment.

1.3 Try always to tell all sides of the story in any kind of dispute.

1.4 Do not knowingly withhold or suppress essential facts.

1.5 Journalists should be reluctant to rely on only one source. Be careful not to recycle an error from one reference source to another. Check and check again.

1.6 Direct quotations should not be altered except to delete offensive language, protect against defamation, or to make minor changes for clarity.

1.7 Reports of new drugs or medical treatments must be considered with great caution. It is easy to raise false hopes or alarm among readers. Cross-check all claims with responsible and neutral sources.

1.8 Photographs may be enhanced to improve reproduction, but must not be altered in a way which could mislead readers. Care must be taken to ensure accuracy in captions. The editor must approve any alteration or manipulation of a digital photographic image, and the alteration must be explained in the caption before publication and archiving.