The upward movers in this week’s media coverage chart have been determined almost entirely by the asylum seeker issue.

A long night of debate in Canberra failed to reach a vote on a solution to the asylum seeker crisis, but the Federal Government remains confident that — with the Houston report as justification — it will have offshore processing up and running on Nauru within weeks in a game-changer for the federal political outlook.

The upward movers in this week’s media coverage chart have been determined almost entirely by the issue: PM Gillard in saying the time for politics on asylum seekers is over; Opposition Leader Tony Abbott saying the plan could have been implemented earlier if the PM had not been so stubborn; Greens Sarah Hanson-Young saying asylum seekers may face a wait of years, Immigration Minister Chris Bowen saying the Government will work on it; Opposition Immigration spokesman Scott Morrison holding the government to account over four years of heavy boat arrivals; Home Affairs Minister Jason Clare arguing the cost of Nauru will be reasonable. And so it goes.

Amid all the hullabaloo, one could forget that most of last week was spent focusing on NBN cost overruns which see Communications Minister Conroy well up on our index, or that South Australian Premier Jay Weatherill has put his hand up in support of gay marriage. 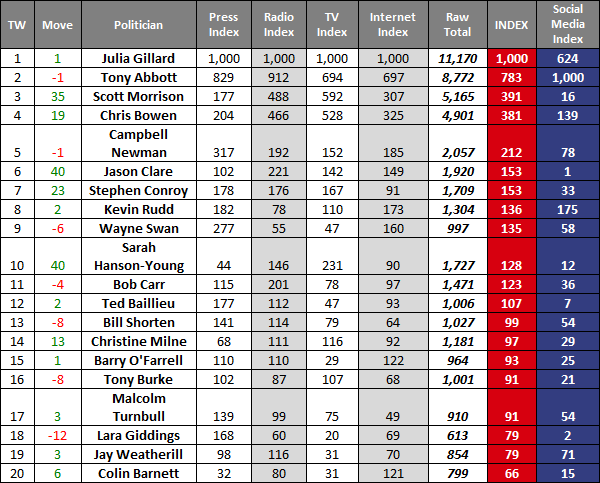 Asylum seeker discussion saw Immigration Minister Chris Bowen join the fray, while K-Rudd, without much more than a whisper, remains an ever present subject of conversation on social media networks.