Who’ll tell Lachie his wife’s show must go? The Ten Network debuts two important more programs tonight. Puberty Blues at 8.30 is the first episode in a series based on the book (and film) of the 1970s teenage girl angst classic. Then at 9.30 it starts Class Of, which is a sort of self-help program based on a Swedish format with “troubled” students at a Sydney high school.

After the debacles of The Shire (it’s on Ten tonight as well at 8 o’clock), Being Lara Bingle (ended by running the final two eps back-to-back to get rid of it during the Olympics) and now Everybody Dance Now, Ten management — from CEO James Warburton to the programmers, led by David Mott — need some wins. The previous management of Ten — not Lachlan Murdoch, who was CEO in 2011, but chairman Nick Falloon and then-CEO Grant Blackley — gave us the big flop of 2011, The Renovators, as well as the muffed 6-7pm news and current affairs idea. But they also gave Ten The Project, a bigger gamble than most of the other new programs. Class Of is a hangover from the Falloon/Blackley days.

Murdoch, in his interim capacity as CEO before Warburton came on board, signed off on Breakfast and its expensive host in Paul Henry. Being Lara Bingle was one of his. But we can’t blame The Shire wholly on him — that’s more a Warburton/Mott flop, but Lachlan Murdoch is chairman and last year the board asserted its right to check the programming ideas and proposals coming up from Mott. But Everybody Dance Now is The Renovators of 2012. A massive failure; tacky, poorly produced, badly hosted and a very costly mistake because Ten will have to give advertisers who have supported it freebies (called “make goods”) in the schedule to compensate for the low ratings.

At a time when every advertising dollar is hard won, this will be doubly costly for Ten: a loss on the program and no revenue for the slots the make good ads are run in. — Glenn Dyer (read the full story here)

Holden crashes talking up The Age. It was not what you’d call a stellar performance by The Age’s new editor-in-chief Andrew Holden, who went on the Jon Faine program on ABC Melbourne this morning to score some points at News Limited’s expense about that company’s reluctance to reveal its digital circulation figures. Rather ironic, given what happened next.

When Holden was asked by a talkback caller whether The Age would be developing an Android app, he answered in a way that revealed he didn’t know that the paper already had one — a point revealed after the interview by several listeners who tweeted in to say that they were listening to the program on their Andriod devices! Oops.

Earlier in the interview he had failed to explain The Age‘s “buy the weekend papers and get the weekday ones free” subscription deal. Faine had to tell him that such a deal existed. During the course of the interview, he also revealed the age of one of his female reporters — and promptly apologised on air for doing so. This was information he was privvy to because he has just signed off on her redundancy.

For those Fairfax employees considering their futures, the boss’ performance would not have inspired great confidence. — Andrew Dodd

Newspaper Exclusives Watch. Does emblazoning “exclusive” in blood red ink at the top of a story convince the public that it’s big news? Michael Stuchbury, the editor-in-chief of The Australian Financial Review, certainly thinks so. Since his move from The Australian – which also loves to spruik its scoops – the number of Fin “exclusives” has gone through the roof. It’s a different style entirely to stablemates The Age and The Sydney Morning Herald, where the label is usually reserved for truly ground-breaking yarns.

There are three exclusives on The Fin‘s front page today: calls for greater regulation of high-frequency trading from fund managers, the retirement of a property industry veteran and the results of a survey from the CEO Forum Group. The only problem? The Oz also splashed with the results of the CEO survey on its front page (though it held off on the exclusive tag). Below sits an exclusive on Lindsay Tanner’s thoughts on media regulation, gleaned from an afterword to an updated edition of his book Sideshow.

Still, the increasingly bitter rivalry between the two national papers has yet to reach the levels of Today Tonight and A Current Affair. As Media Watch noted recently, those two shows both labelled stories about the CSIRO’s new well-being diet, aired on the same night earlier this year, as exclusives. Can that effort be beaten? If you’ve seen a bizarre use of the “exclusive” tag, drop us a line. — Matthew Knott

The Oz critic and the Greens run. Some startling developments yesterday in The Australian’s chief literary critic Geordie Williamson’s bid for a seat on the Blue Mountains City Council. Amusingly, Williamson is running for the Greens, which The Oz, you’ll recall, wants to see “destroyed at the ballot box”. While the national broadsheet has failed to pick up the scent, the local Blue Mountains Gazette has been like a dog with a bone.

Yesterday, the Fairfax-owned paper reported that Williamson — perhaps displaying a smidgeon of the eastern bloc tendencies unfairly attributed by The Oz to NSW Greens Senator Lee Rhiannon — had called for a democratic vote in Ward 2 to be abandoned and councillors, including himself, appointed after only three parties (Labor, Liberal and the Greens) nominated for the three available positions.

The retrograde plan was angrily slapped down by retiring Labor councillor Alison McLaren, who was “amazed” that the Greens, “the party that markets itself as the so-called defenders of democracy”, would take such a dubious step. Williamson, she says, is “politically naive”. The Ward 2 elections will now take place as planned, alongside those for Wards 1, 3 and 4 on September 8. — Andrew Crook (thanks to Bluntshovels for the tip off).

Viewers record the election ads away. Thank God for the PVR (personal video recorder, or digital video recorder in the US), Netflix and the like. As the Financial Times reports this morning:

“US voters are becoming oblivious to the political ads dominating the airwaves during this election campaign, according to a study of media consumption habits. Nearly a third of likely voters had not watched live television in the past seven days, according to a June poll conducted by Say Media, a digital publishing company, in conjunction with two political advertising consultancies and two pollsters that represent both Democrats and Republicans.

“Respondents watched an average of 20 hours of video a week, but nearly half of that time was on platforms that make it easy to avoid commercials, such as the web or digital video recorders. Of respondents who own DVRs, 85 per cent said they skipped ads at least three-quarters of the time.”

All that money in the US being wasted on ads, the hundreds of millions of dollars down the drain in growing numbers and fattening the bottom lines of TV networks like NBC, CBS, Fox and others. Something for us voters to remember in our federal election campaign next year. The PVR, it’s the viewers’ friend. — Glenn Dyer 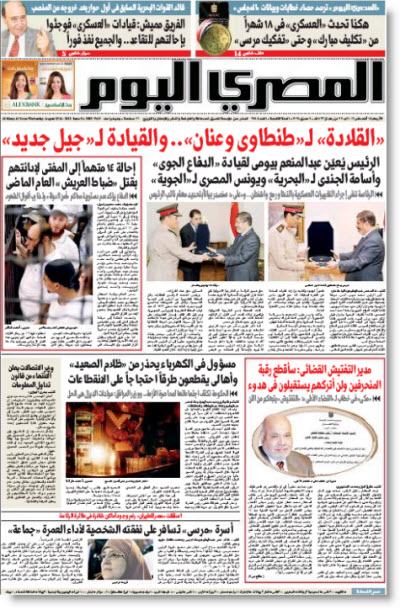 “Mark Thompson, outgoing director general of the BBC, has been named the new president and chief executive of the New York Times.” — The Guardian

“Two more Somali journalists were killed in the nation’s capital, bringing the number of journalists slain in the country this year to nine and highlighting the dangers media workers continue to face in the Horn of Africa nation despite increased security in Mogadishu.” — ABC News

“Police say there was no foul play in the death of author Heidi Holland. The journalist and author of Dinner with Mugabe, was found dead at her house in Melville, Johannesburg and police suspect she took her own life.” — SABC

Williamson might be Green, but he does work for Murdoch?