What was once the party of compassion and humanity has abandoned its principles and now boasts that anything you can do we can do tougher.

So it has come to this*. What was once the party of compassion and humanity has abandoned its principles and now boasts that anything you can do we can do tougher.

Immigration Minister Chris Bowen when asked this morning on Sky Television whether the new boat people policy would be tougher than the so-called Pacific solution of John Howard’s government:

“There are elements of this policy that do indicate a very tough approach, yes.”

*With due acknowledgement to xkcd.

Feeding the world. Soaring grain prices are beginning to cause concern with Reuters reporting that leading members of the Group of 20 nations are prepared to trigger an emergency meeting to look at ways of avoiding a repetition of the food price spike that triggered riots in poorer countries in 2008.

The Index, which measures the monthly change in the international prices of a basket of food commodities, averaged 213 points, up 12 points from June. That was still well below the peak of 238 points reached in February 2011, however.

The Index’s sharp rebound was mostly driven by a surge in grain and sugar prices. International prices of meat and dairy products were little changed.

Since then grain prices have increased further.

Mourning a lost youth. News to provoke great sadness awaited me this morning. The Dandy is dying. and may not make its 75th anniversary edition in October.

The Guardian broke the news that publisher DC Thompson had confirmed that the closure of the print title was being considered as part of a review of the company’s magazine business as sales fell to a tiny 8000 an issue.

Back when its arrival was a highlight of my week the adventures of Desperate Dan, the cow pie eating cowboy, and Korky the Cat were reaching two million homes.

The only glimmer of good news among the bad is that Desperate Dan might live on in that other famous DC Thompson title The Beano.

Sinking GDP and rising violence. In Greece the decline goes on with GDP down in its fifth consecutive year. Unemployment has already climbed to 23.1 percent, with nearly 55 percent of those aged 15-24 out of work. 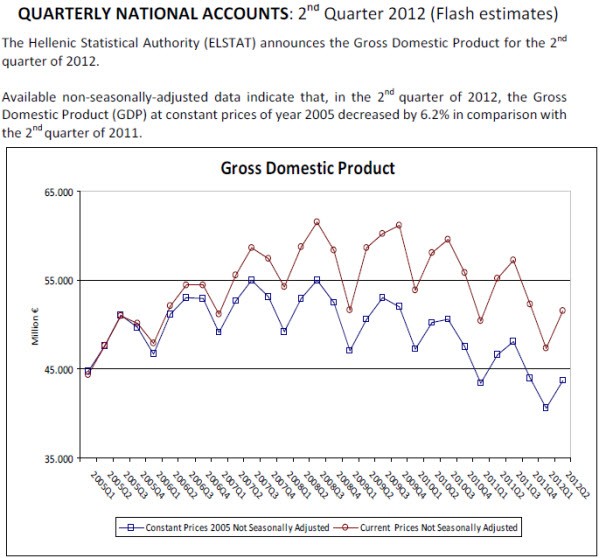 And in the streets of Greek cities violence is on the rise. The editorial in this morning’s Kathimerini:

That’s the trouble with these people happy to promote unemployment in austerity measures, to fund “government savings” – cutting them adrift from society and expecting them to shut up and abide by the same laws, while they go without, left to fend for themselves, while those that cut them adrift, holding their positions (some with bonuses), can ignore them and their circumstances.
Perhaps the saddest aspect of the thing is that some of those doing the cutting, still employed, were responsible for the conditions that led to present circumstances, in the first place.
Then some wonder why “these lawless people” get so desperate and do these things, acting so “antisocially”.