Jewish News defiant over boat people op-ed. Crikey‘s report last week on a controversial opinion article on asylum seekers by the owner/publisher of The Australian Jewish News, Robert Magid, caused a stir, with The Age and the ABC’s Lateline joining the fray with follow-ups. In the op-ed, for those who missed it, Magid called for Jews to be less compassionate towards asylum seekers arriving by boat and conflated the issues of Muslim immigration and terrorism. Some in the Jewish community reckoned this “hate speech” and demanded the paper apologise. In last Friday’s edition, however, AJN editor Zeddy Lawrence stood by his man:

“As a newspaper, we don’t legislate on who should believe what or whether one person’s point of view is more legitimate or more valid than another’s.”

The paper published four letters in support of Magid’s article and five opposed. Can’t get much more fair and balanced than that. — Matthew Knott

Front page of the day. And it’s farewell to the 2012 London Olympic Games or, if you’re the UK Daily Telegraph, “auf wiedersehen, adieu”. 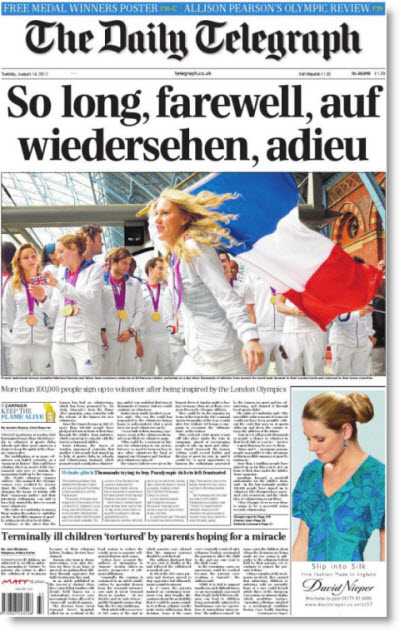 “US broadcaster NBC says the Games were the most popular TV event in US history, pulling in 219 million viewers across 17 days. That’s just above the 215 million that tuned in for the Beijing Olympics in 2008.” — All Things D

MasterChef to find a new home

“MasterChef Australia will indeed have a new home in 2013 with the building that has been its home for four seasons no longer available for filming.” — TV Tonight

The legacy of Helen Gurley Brown

“Helen Gurley Brown has died at the age of 90. You might consider her synonymous with Cosmopolitan magazine, where she was editor-in-chief for more than 30 years, building it into a widespread international brand.” — The Atlantic Wire

“Google made another foray into producing original content Monday when it announced its plans to buy the Frommer’s brand of travel guides from John Wiley & Sons to augment its local and travel search results..” — The New York Times