NT Labor is embarrased by Labor

It is not just a Labor Prime Minister they are keeping out of sight in the Northern Territory.

A once proud party. It is not just a Labor Prime Minister they are keeping out of sight in the Northern Territory. The very word LABOR is now being hidden as the government seeks re-election. This is the once proud party’s advertisement on page one of the Sunday Territorian yesterday. 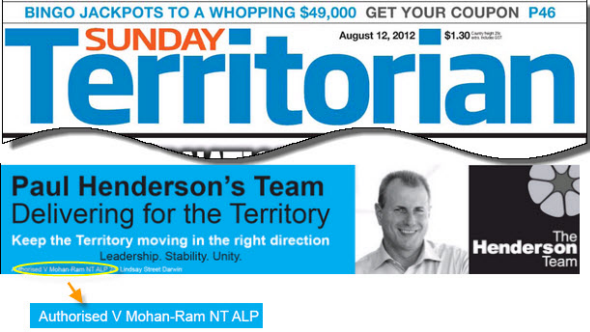 Not a Labor Party logo in sight and the ALP mentioned only in the fine print at the bottom.

First a movie now a stage show. Al Gore turned facts and figures about global warming into a movie that for a while turned the future of the plant into a major issue worldwide. Now a British academic has taken an old fashioned lecture onto the stage at London’s Royal Court theatre in a novel way that may reignite the interest when turned into a television production.

The Observer at the weekend described “audiences, mostly young, flocking to see his solo performances of Ten Billion, a brutal but careful dissection of the likely impact of humanity’s swelling numbers on our planet.” 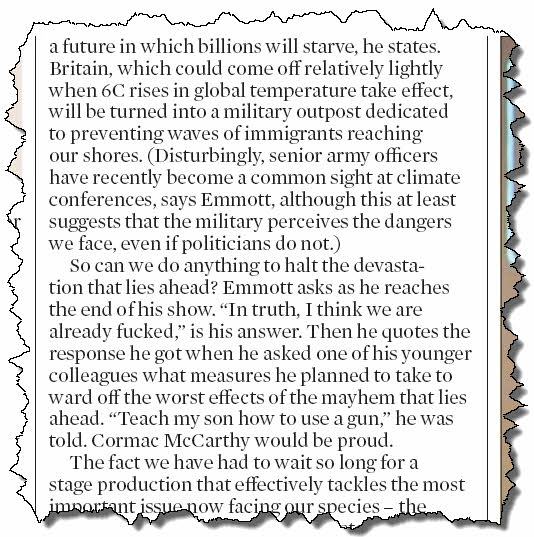 A reason for pessimism. Stephen Emmott’s pessimism is supported by the latest report on the Arctic ice cap by the National Snow and Ice Data Center. On August 1, ice extent was just below levels recorded for the same date in 2007, the year that saw the record minimum ice extent in September. Low sea ice concentrations are present over large parts of the western Arctic Ocean. Warm conditions dominated the weather for most of the Arctic Ocean and surrounding lands. For a brief period in early July, nearly all of the Greenland ice sheet experienced surface melt, a rare event.