Melbourne broadsheet The Age is confronting a talent crisis as up to 20 senior writers -- including a core group of editorial stars -- head for the exit.

Melbourne broadsheet The Age is confronting a talent crisis as over 20 senior writers — including a core group of editorial stars — head for the exit. Crikey has been told of 19 names that are queuing up to leave or have already left the building, raising fears the paper could become a hollow-log populated by skittish Generation Y videobloggers.

Crikey has decided not to name names until their applications have been ticked off by new editor Andrew Holden. But we can reveal that yesterday was respected media editor Kirsty Simpson’s last day and that she leaves happy and ready for new challenges. Simpson was appointed business editor in 2009 and managed to keep the section bubbling despite its insertion in rear reaches of the paper, before her move to a writing role at the helm of the media section. Earlier this week Crikey reported that Melbourne Life editor Lorna Edwards and Ray Cassin had already pressed the ejector button, adding to Tom Ormonde’s exit a few weeks ago.

One concerned Age sage said that “the most interesting question at the moment — given the number of people interested in leaving — is where content (particularly features and good reads) will come from and whether the company will use redundant staff as contributors”. We’ve also heard that the already thin-on-the-ground artists/designers department at Collins Street will take a major hit with at least three talented performers likely to take their easels and brushes elsewhere.

Meanwhile, this “Fair go Fairfax!” missive sent by the Media, Entertainment and Arts Alliance yesterday showed that administrative staff are getting the raw end of the stick on payouts, with most receiving just four to 16 weeks of pay. Editorial staff get two weeks severance plus four weeks for each year of continuous service. Applications for redundancies close on August 24. 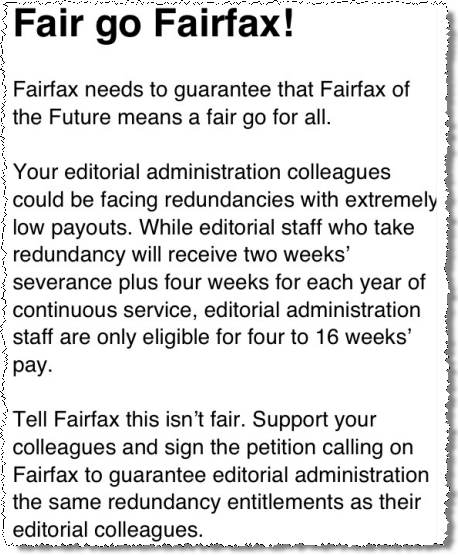 Age left half-Naked after Rule exit, and Sly could follow

There was an earlier version of this that said Kirsty Simpson was still Age business ed. She moved over to media ed/writer at the start of the year. Thanks to Age people for pointing this out.