Twenty senior writers leave The Age? Melbourne broadsheet The Age is confronting a talent crisis as over 20 senior writers — including a core group of editorial stars — head for the exit. Crikey has been told of 19 names that are queuing up to leave or have already left the building, raising fears the paper could become a hollow-log populated by skittish Generation Y videobloggers.

Crikey has decided not to name names until their applications have been ticked off by new editor Andrew Holden. But we can reveal that yesterday was respected media editor Kirsty Simpson’s last day and that she leaves happy and ready for new challenges. Simpson was appointed business editor in 2009 and managed to keep the section bubbling despite its insertion in rear reaches of the paper, before her move to a writing role in the media section. Earlier this week Crikey reported that Melbourne Life editor Lorna Edwards and Ray Cassin had already pressed the ejector button, adding to Tom Ormonde’s exit a few weeks ago.

One concerned Age sage noted that “the most interesting question at the moment — given the number of people interested in leaving — is where content (particularly features and good reads) will come from and whether the company will use redundant staff as contributors”. We’ve also heard that the already thin-on-the-ground artists/designers department at Collins Street will take a major hit with at least three talented performers likely to take their easels and brushes elsewhere. Applications for redundancies close on August 24. — Andrew Crook (read the full story here)

Kyle can’t hurt babies in Pakistan: ACMA. Kyle Sandilands has been let off the hook again after the Australian Communications and Media Authority ruled today that his comments about a Pakistani baby with six legs was not in breach of any additional license condition. Sandilands referred to the infant, born a conjoined twin, as “spider baby” during a broadcast in April.

Complaints had been filed to ACMA that a license condition had been breached regarding the protection of childrens’ welfare. The license condition was implemented after Sandilands’ misconduct of an interview where a 14-year-old girl revealed she had been r-ped when she was 12.

Hun‘s VicRoads howler II. Another week, another significant Herald Sun howler on statistics. On Wednesday, the paper published a yarn by state politics editor Peter Rolfe on the apparently lavish overseas expenditure of VicRoads executives — just the sort of story the little paper likes to sink its teeth into. “Globetrotting executives”, wrote Rolfe, had apparently spent more than $200,000 on international trips while 450 staff faced the axe under the Baillieu government’s job slashing plans. One VicRoads director in particular had shelled out “$120,000” in a lavish French sojourn to investigate “truck management strategies”.

The only problem being that the director in question actually spent 10% of that amount — $12,000. The Hez, it seems, had recklessly added an extra zero. Yesterday, a correction was buried on page 29 in a section headed “for the record”. 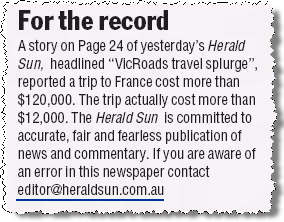 There are interesting parallels between this stuff-up and another from late June over “500%” double parking fine increases, which ran on the front page. Intriguingly, both involve the same opposition frontbencher feeding the story (Luke Donnellan), the same journalist (Rolfe) and the same government department (Transport). Later that day the paper was forced to run a online correction after Baillieu spinner Paul Price tore the yarn to shreds in a memorable media release — the increase was in fact a furphy as Media Watch took glee in pointing out the following week. — Andrew Crook

Front page of the day. The UK Daily Telegraph leads this morning with the incomparable Jamaican sprinter Usain Bolt’s 200-metre gold medal — his second gold for the London Olympics and the second time he’s won both the 100-metre and 200-metre races in successive Olympics: 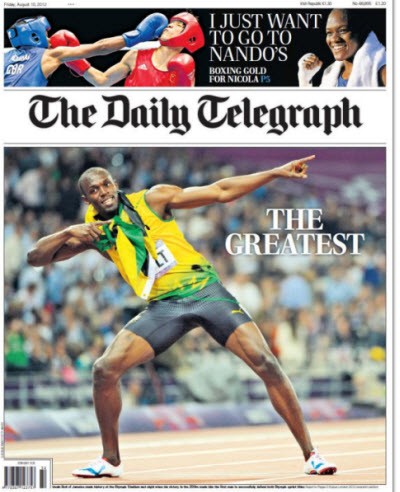 The Department of Corrections. Here’s a charming correction all the way from Tarboro, North Carolina, home of The Daily Southerner and involves an abandoned car, an unrelated house and a stolen refrigerative air conditioning unit: 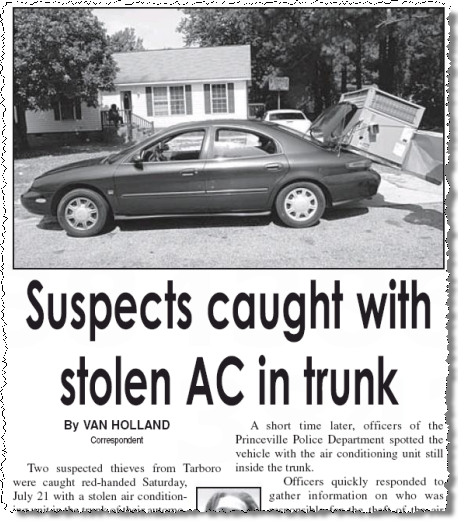 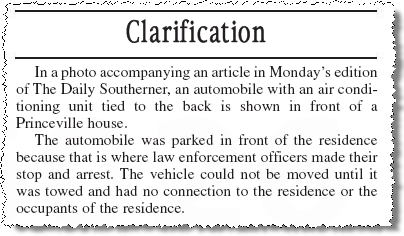 “Communications Minister Stephen Conroy has delivered a fiery tirade against the media for constantly repeating misconceptions about Labor’s National Broadband Network project, singling out the Financial Review newspaper for particular ridicule and recommending that those interested in accuracy read broadband forum Whirlpool.” — Delimiter

How to harness the power of community news

“Journalists understand the importance of engaging with their audience, whether that is in person, via social media or on their news website. Taking that a step further at news:rewired — full stream ahead last month, community co-ordinator Hannah Waldram put the business benefits of successful audience engagement in black and white.” — Journalism.co.uk

The “The Hez (said, she said)” howler : how “committed” are they (Limited News) that they go to print with these sort of “political witch-hunts”, going off half-cocked, in “gottcha” mode – then bury corrections?

Speaking of media outlets getting their figures wrong:

“and the second time he’s won both the 100-metre and 200-metre races in successive Olympics”
While it is a great achievement by Usain Bolt, surely it is only the first time that he (or anyone) has done that….