Foxtel, new media titan, rakes in millions. While News Corp was gloomy about its Australian newspaper businesses — with forecasts of more pain and cost cuts to come in the 2013 financial year — its about-to-be-50%-owned associate Foxtel confirmed it is not only the biggest and most profitable media company in Australia, but it is about to become […]

Foxtel, new media titan, rakes in millions. While News Corp was gloomy about its Australian newspaper businesses — with forecasts of more pain and cost cuts to come in the 2013 financial year — its about-to-be-50%-owned associate Foxtel confirmed it is not only the biggest and most profitable media company in Australia, but it is about to become even bigger and more profitable in the wake of the Austar takeover.

News forecast a flat year for its about-to-be-divorced publishing business because of more cuts and weak revenue expectations for the Australian newspapers. But no such concerns for Foxtel: after the $2 billion Austar takeover, it’s heading for earnings before interest, tax and depreciation and amortisation (EBITDA) of more than $950 million, perhaps a billion, for the current financial year.

Foxtel, which is 50% controlled by Telstra (and News Ltd will grab the other 25% owned by Cons Media to add to its 25% when the Cons Media bid goes through), this morning reported record EBITDA (before one-off, transaction and integration costs and consolidation of Austar) of $598 million, up 8.5%. Given Austar earned an EBITDA of $335 million for the 2011 financial year and Foxtel said this morning it had already identified cost savings of $40 million from the merger and made them, the company should be able to boost gross earnings to close to $1 billion by June 30 next year.

At that level it will be bigger than Seven West Media (which is expecting EBITDA for the 2011-12 financial year of around $473 million. It will be more profitable than Foxtel, and News Ltd, according to some analysts. — Glenn Dyer (read the full story here)

Department of Corrections. This correction that ran in The Guardian this week is an interesting contrast to Crikey‘s first Get Fact investigation that examined which Labor pollies claimed working class heritage. He may be a Lord now, but he still recognises his working class roots … 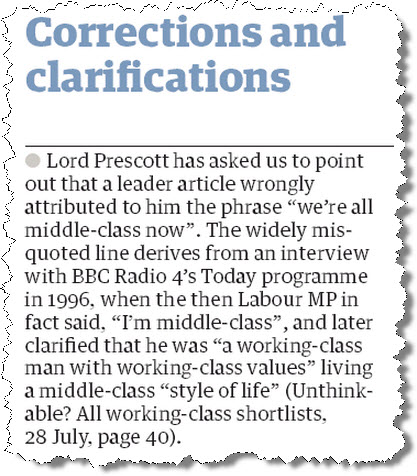 Front page of the day. Sure, the Games haven’t been the gold mine for Australia that some have wanted, but isn’t it nice watching the Brits enjoy themselves for once? 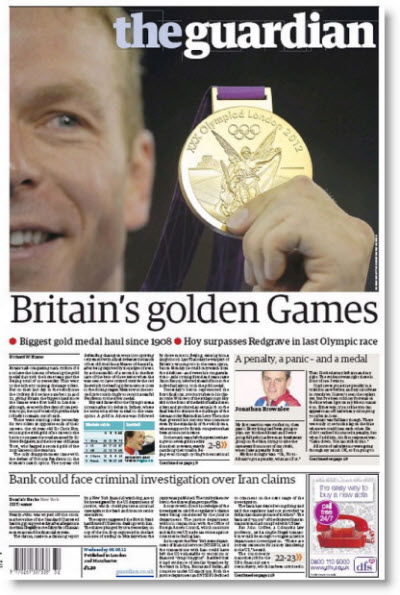 Can you legally stream the Olympics online?

“Privately and publicly, Mr. Obama has articulated what he sees as two overarching problems: coverage that focuses on political winners and losers rather than substance; and a “false balance,” in which two opposing sides are given equal weight regardless of the facts” — The New York Times

Pause on the next Olympic TV rights

“The IOC is holding off negotiating the next Olympic television rights deal for Australia until after the NRL broadcasting deal is done, according to Games marketing boss Timo Lumme.” — The Australian

Should the ABC do less?

“The question of whether the ambitions of the ABC and the resources it has to scale that ambition has been asked persistently through managing director Mark Scott’s tenure. However, it’s also a salient one for Aunty’s director of television, Kim Dalton.” — The Age

“Sir Elton John is suing The Times for libel over articles he says falsely linked him to immoral tax avoidance.” — BBC News