From the Crikey grapevine, the latest tips and rumours … Going the distance with Gillard. Claims by some Crikey tipsters that Julia Gillard has barely been able to keep a staff member since she took over the top job just over two years ago have prompted a spirited rally from the PM’s supporters. We hear that Tom […]

Going the distance with Gillard. Claims by some Crikey tipsters that Julia Gillard has barely been able to keep a staff member since she took over the top job just over two years ago have prompted a spirited rally from the PM’s supporters. We hear that Tom Bentley and John Spierings have stayed the course, as has Rondah Rietveld, originally a Gillard electorate office staff member who became an adviser in opposition, then PMO caucus adviser. “[Rietveld] is due a Public Service Medal (even though political staff are not eligible),” our tipster reports.

But it’s not all rosy in chez Gillard. There have indeed been plenty of departures from the PMO (see here and here), and we’ve also heard that a relatively senior staffer is “widely disliked”, amid questions about what deal led to them securing the job in the first place.

In the interests of editorial balance, Crikey is keen to report on conditions in the Abbott bunker (in which La Credlin reigns supreme), but we’ve not heard a whisper. Can you help us out? Feel free to stay anonymous …

Stefanie spotted on The Shire. We doubt that many political punters were watching Ten’s bogan spectacle The Shire last night, but one wannabe pollie made an appearance. The unsuccessful ALP candidate for Cronulla in the 2011 state election, Stefanie Jones, popped up in a segment where The Shire characters went speed dating.

Andy: Stefanie right?
Stefanie: Stef. Only Stefanie when I’m in trouble
Andy: Have you ever been called Fanny? Do they ever go for the second half?
Stefanie: No.
Andy: Never happens?
Stefanie: No
Andy: Well there ya go. 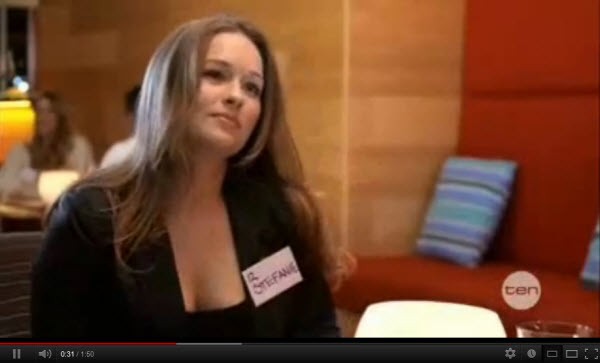 A spot of Qld history. Crikey has been running tips that the Newman government sends out photographers to snap protesters, and runs “dirt files” on critics. It would seem that’s nothing new in the state that gave us Sir Joh; the tips prompted this rather endearing reminiscence from a reader:

“As a young student in the mid-to-late 1960s a small group of us sometimes went to a centre in Ann Street Brisbane to do terrible things like listen to people play guitars and sing some of the new peace music emerging from the UK, Canada and the US as well as Australia. Sometimes we students played and sang as well. Apparently the place was high on the Special Branch watch list and there were two officers conspicuous by their presence at each performance. Since we were all in batik print skirts or jeans with peasant tops and all had long flowing locks, the officers stood out because of their great height, width, the identical suits they wore and the size of their big black boots. They just stood at the back and looked on impassively. It was the middle of the Cold War and the centre (unknown to us) was apparently run by the Communist Party. We were pretty naive but smart enough not to use our own names on the entry register — yes, they had one of those as well. We all used the names of characters from the Disney cartoons. I was Minnie Mouse and my best friend was Clarabelle the Cow. Some of the groups went on to make good in the music world. Oh for the return of simpler times!”

Meanwhile, as Newman’s funding cuts and political tactics prompt something of a public backlash, we hear that ousted premier Anna Bligh has been seen heading off on holiday from Brisbane airport with her husband, both “looking extremely well rested”. Our mole wonders if we’ll see Bligh in the political sphere again. Perhaps a federal foray?

Patrons MIFFed. Seems like there have been a few technical stuff-ups at the Melbourne International Film Festival. We hear that a Saturday afternoon screening of director Rodney Ascher’s documentary Room 237 was thrown into disarray when the disc or file used to project it skipped more than 10 times, each skip generating increasingly loud groans from the audience. Projection problems then beset the film’s final five minutes; the footage displayed as incomprehensible visual gibberish. Finally, the “load” screen used in Sony software such as Sony Playstation appeared as disgruntled viewers headed for the exit.

Meanwhile, upstairs in Cinema 6, MIFF punters booked in to see German filmmaker Werner Herzog’s new documentary Into the Abyss were treated to a screening of not just the wrong film, but footage from the wrong medium. They watched two television episodes of Herzog’s series Death Row. Volunteers stopped the screening mid-session to resolve a “technical difficulty” that most of the audience had figured out was not a problem at all — since it was a two-part screening, the same introduction to each episode played, making it seem like the film had started again.

With no announcement from staff afterwards, many festival punters may have left believing they had seen the Herzog film they’d paid for. MIFF have now announced it will be running a screening of the correct Into the Abyss on Sunday for those that missed out. But one punter told us things could had have been worse, reminiscing about last year’s MIFF, in which during a screening of director Tom Twyker’s love triangle drama Three, the message “not for public viewing” flashed up every 15 minutes.

To be fair to MIFF, the 60-year-old festival, which winds up on August 19, is going through a particularly tricky period as it moves from film to digital cinema projection. Perhaps the technical stuff-ups add an exciting edge to the cinema experience?

Landmark agreement on conmen. We’ve seen some dodgy “media opportunities” in our time. But this invite to Tasmania’s press pack seems like a con:

“The Minister for Consumer Protection, Nick McKim, will today take part in the signing of the first co-operative agreement with Victoria and New South Wales to crack down on travelling conmen. The NSW Minister for Fair Trading, Anthony Roberts, will also be in attendance.”

How many travelling conmen can there possibly be? And is there a separate taskforce for conwomen?

For technical stuff-ups you can’t go past Katherine cinema.
In nearly a decade I’ve rarely seen a film without some ‘quirk’ – out of focus, out of sync, partly projected off-screen, subtitles missing, I think even once upside-down. Last week they ‘forgot’ to schedule our fortnightly film society movie.
Earlier this year at the Sydney Travelling Film Festival (7 features over a weekend) the incompetence was particularly spectacular – space doesn’t permit! But watching a good part of a doco about Ayrton Senna without subtitles, with various of us going out to point this out, to be told that as far as they knew there were no subtitles was a particular highlight.
But, I’m half-proud, half-exasperated, to say that no-one complained, just sat patiently and politely. Except me, who grumbled uselessly to himself!