The jewel in the dinted Fairfax crown is apparently The Australian Financial Review -- just ask the paper itself. Plus the Church of England dumps its News Corporation stock, more Elveden arrests in London and other news of the day.

The Fin reports on why The Fin rules. Read all about it: the jewel in the dinted Fairfax crown is The Australian Financial Review. Just ask the paper itself, which ran Morgan Stanley’s astonishingly bullish assessment in its “Notebook” section today:

“There is a lot of debate about the future business model/profitability of FXJ’s Metro newspapers … but there is one FXJ masthead for which the future appears relatively clear and bright — The Australian Financial Review.”

Front page of the day. China may have 34 gold medals in its Olympic tally, but there was one they wanted more than most. The English-language ChinaDaily “shares the heartbreak” of its star hurdler Liu Xiang crashing out of the 110 metre heats. After winning gold in Athens, injury cruelled his chances at the Beijing Games. 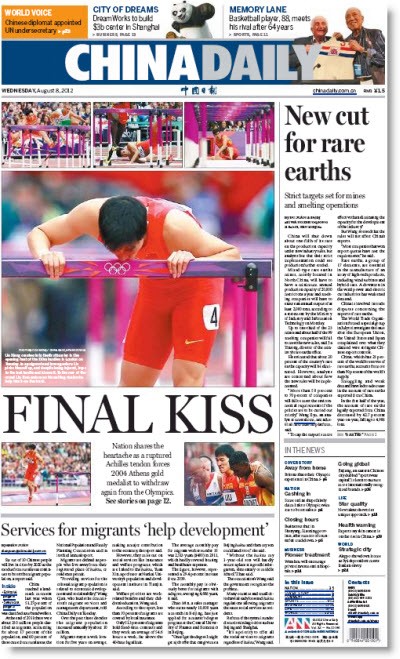 “The investment is relatively small in the context of News Corp’s $57.49bn market capitalisation, but it will comes as a significant blow to the media group’s standing as an investment vehicle. The Church Commissioners and the Church of England Pensions Board, who together hold more than £8bn of assets, sold all their shares, after the Church’s Ethical Investment Advisory Group raised ‘serious concerns’ about their holding in the firm.” — The Telegraph

“Is it too early to predict contenders for the inaugural Stella Prize? Too late, I’m doing it. Here are ten stompers for 2012 to start with, and that’s just the fiction.” — Meanjin

“A Sun journalist and a serving Suss-x police officer have been arrested by Scotland Yard officers investigating alleged corrupt payments to public officials.” — The Guardian

“According to data released by the Audit Bureau of Circulations on Tuesday, overall paid and verified circulation of magazines declined slightly, by 0.1 percent, in the first half of 2012. But newsstand sales — often seen as the best barometer of a magazine’s appeal — were down nearly 10 percent.” — The New York Times

Networks can delay Games if they want: IOC

“If NBC wants to show Usain Bolt’s 100-meter victory on tape delay, the IOC says that’s up to the network. Bolt’s blinding dash in the signature event of the London Olympics on Sunday came at 4:50 p.m EDT. NBC broadcast the race on television hours later in prime time, frustrating fans accustomed to watching action as it happens and sharing instant reaction through social media.” — Associated Press

So an English county known for over a millennium as Sussex has to be posted as Suss_x?

God help Crikey if there is ever a story about Scunthorpe.