Britain’s coalition all out of love over electoral reform

For two parties that have been enemies for so long, Britain's Conservatives and Liberal Democrats haven't done too badly at working together in a coalition government.

For two parties that have been enemies for so long — indeed, whose hostility basically created the modern two-party system — Britain’s Conservatives and Liberal Democrats haven’t done too badly at working together in a coalition government.

This week, however, that government has come under stress with two disputes over electoral reform. Yesterday, Conservative Prime Minister David Cameron announced that he would press ahead with proposed reform of electoral boundaries, despite the opposition of Deputy Prime Minister and Lib Dem leader Nick Clegg.

The point of the reform is to reduce slightly the size of the House of Commons (from 650 to 600) and to ensure that all electorates are about the same size (within a 5% tolerance) and that their boundaries are reviewed more often. This would eliminate the bias of the current boundaries, which advantage Labour at the expense of the Conservatives to the tune of maybe 20 or 30 seats.

The campaign for equal electoral districts, or “one vote one value”, has a long history: it’s almost 175 years since it appeared as one of the six points of the People’s Charter. By now Britain is one of the last holdouts; most countries that use single-member districts (like Australia) have provisions that mandate approximate equality (sometimes with a special provision for sparsely populated regions), and most democracies avoid the problem entirely by using some form of proportional representation.

So it’s a little ironic to find the Conservatives, historically the opponents of electoral reform, pushing it this time, and the much more reformist Lib Dems threatening to sink it. Until, that is, you look at the political context.

Clegg’s promise to oppose the new boundaries came on Monday after the collapse of the government’s plans to reform the House of Lords. Strongly backed by the Lib Dems, Lords reform came to grief after almost 100 Tory MPs refused to support it. Together with Labour’s rather opportunistic opposition, that meant the changes, which would have created an 80% elected House of Lords, had almost no chance of getting through the Commons.

If anything, it’s a bit of a surprise that Tory defections weren’t greater. Not just because defence of the House of Lords runs deep in the DNA of the Conservative Party, but also because even a partially democratic House of Lords would just draw attention to the democratic deficit in the Commons.

And that’s the real, underlying issue in this whole debate. It’s true that the old Commons boundaries disadvantage the Conservatives as compared to Labour. But the big victims of the present system are the Lib Dems, and tinkering with the boundaries isn’t going to do anything to solve that. To illustrate, here are the results for the three major parties in the past three elections (all figures from Adam Carr’s Psephos): 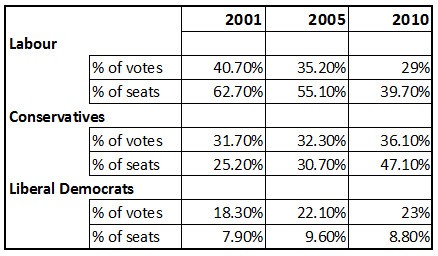 The unfairness is not just obvious on paper, it has serious consequences. If, after the 2010 election, Labour and the Lib Dems between them had held a majority of seats to go with their majority of the vote, coalition negotiations would have been very, very different.

As it was, all Nick Clegg really got from the Conservatives was a promise for a referendum on preferential voting. That would have improved things a bit, but not a whole lot. In any case, with Conservative opposition and Labour only lukewarm, the referendum went down to defeat by a large margin in May of last year.

Now with the defeat over the Lords, Clegg has obviously decided that, despite Cameron’s modernising image, the Conservatives will never really be a reformist party and they need to be treated accordingly. So no boundary reform, and a rather more frosty coalition relationship.

Yet none of this means the Coalition is likely to break up any time soon. Neither party has much in the way of alternative options; the government is already unpopular, and an end to the Coalition would almost certainly mean an early election. Voters would then take their revenge on both the estranged partners, and especially on whichever one was seen as more responsible for the break.

So most probably Cameron and Clegg will be together for a while to come. Just don’t expect them to see eye to eye on everything.

Woolwich killers get exactly what they want

@GAT (Melb.): Yes, that’s right, they will. Perhaps with just a little more excuse, since it’s true that the change will disadvantage them, whereas on Lords reform they’re just being bloody-minded.

BTW, I don’t know where those trailing zeroes in the table came from. Ignore them.

“So it’s a little ironic to find the Conservatives, historically the opponents of electoral reform, pushing it this time…”. No government or political ever undertakes electoral reform or even minor changes to the electoral process unless it’s to their advantage and will oppose anything that disadvantages it. Australia has proportional representation because the rise of the Country Party in the 1920’s threatened to split the conservative vote. In Tasmania, Labor and the Liberals colluded to reduce the size of the lower house to something a little larger than a local council in an attempt to exclude the Greens.