From the Crikey grapevine, the latest tips and rumours … Moonlighting in the PMO? There’s been plenty of movement in the Gillard bunker, the most recent departure being that of policy director Ian Davidoff. A tipster reckons the only staff member who’s stuck out Gillard’s two years and one month in the top job is long-term staff […]

Moonlighting in the PMO? There’s been plenty of movement in the Gillard bunker, the most recent departure being that of policy director Ian Davidoff. A tipster reckons the only staff member who’s stuck out Gillard’s two years and one month in the top job is long-term staff member Tom Bentley — but perhaps our Crikey readers can confirm or deny that?

Now we’ve heard that Anthony Albanese protoge Jo Haylen, Gillard’s director of administration, might be leaving as she is topping the Labor ticket for the Marrickville Council elections on September 8. A Canberra mole has posed the question of whether she should stay on in the PMO, asking how she can be present at council meetings while managing Gillard’s busy program during parliamentary sitting weeks. 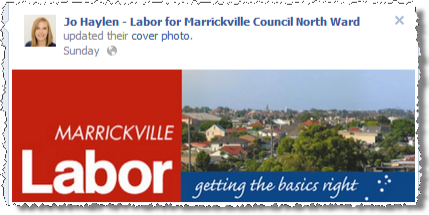 Haylen told Crikey she had “no intention of leaving the PMO”. “There is nothing to prevent a MOPS [Members of Parliament Staff] staff member from nominating for local government,” she said.

And she might be right on that — it appears the NSW Local Government Act 1993 disqualifies a person who is a member of the NSW parliament (or staff) from running for local government, but does not disqualify their federal cousins. This is different to Victoria, where a state or federal MP or staffer cannot take office in local government.

Federal staffers generally work like slaves — so is it too much to take on council role as well? Crikey is aware of at least one Bob Brown staffer who sat on a Sydney council before the last federal election. Know of more staffers who have sat on local councils at the same time? Did they have time to do both jobs well? Drop us a line.

Meanwhile, a Canberra insider claims almost every admin person in the PMO office has left in the past few months, while the relationship between the PMO, lower house queen maker Andrew Wilkie and the Greens has apparently soured somewhat.

Snap happy. We reported yesterday that a union was annoyed that participants at its Brisbane protest against the latest Newman cuts were photographed by a government mole. Crikey wondered if this was standard practice — and if it was appropriate. A tipster has passed this on about a protest at a Melbourne hospital: “During the ANF’s public hospital EBA industrial action, senior management at the Alfred Hospital took photos of nurses and officials during at least one of the walkouts”. And we’ve heard whispers that a certain politician, now in a senior role, used to arrange for any protests outside his electorate office to be filmed and photographed — apparently it was obvious because the snappers wore smart suits, and in this location, suits stood out. In Crikey’s experience of covering protests, the boss’ snappers usually stand out because they look a) furtive and b) like they don’t belong.

These tips raise the question of what bosses and politicians do with the evidence on who has protested. Do they identify the protesters and keep the information for future use? Insiders can keep us up to date on this, and by all means do so anonymously.

Tickets on himself. Those remaining subscribers of The Age will be delighted to know they can enter the draw to win tickets to meet the new editor-in-chief, Andrew Holden, at a function on August 21. “Maybe I’ll enter so I can meet him”, one Age wag noted yesterday. “Light refreshments” are to be served; given Fairfax’s sweeping job cuts, it might be a Sao with Vegemite. 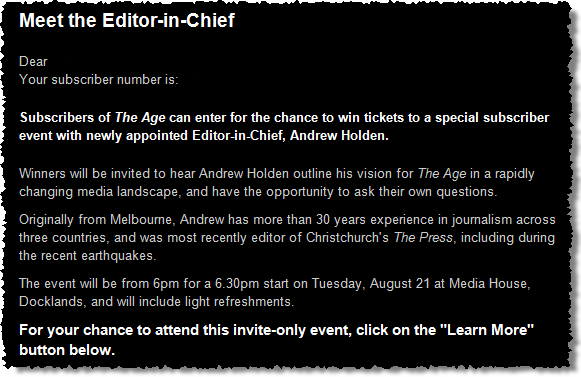 Lean times at Fairfax have also affected The Age Book of the Year Awards. In previous years winners received $10,000 for the fiction, nonfiction and poetry categories (with an additional $10,000 for the overall winner). This year, the category winners will receive $2500 each.

Newspaper free-for-all #876325. Not quite free, but is half-price the new strategy for circulation-challenged newspapers? A Crikey reader spotted this promotion at a newsagent along the glitter strip on Friday … 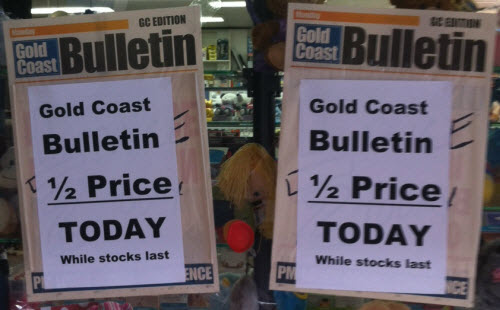 I have heard it from a good authority that when the protesters photos are taken the fat cat politician/boss later uses the photos in decoupage type activities, along with their bonus notices and annual reports, then hang them in their homes as a reminder of their time in power