The big question being asked by bookmakers is what colour jacket Julia Gillard will wear at question time next Tuesday.

Gillard lags but what will be the colour of her jacket? The opinion polls go up, the opinion polls go down but the market, it stays the same. Labor remain long priced outsiders to retain government and the consensus is still that Julia Gillard will not be Prime Minister when the party suffers the defeat. 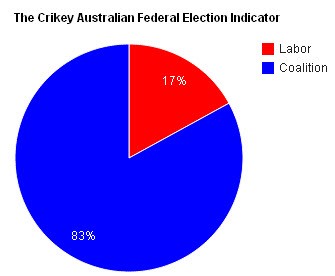 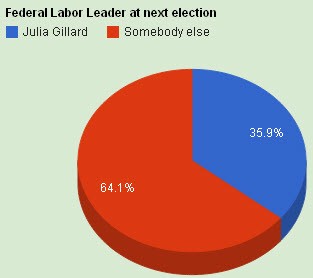 Be all that election race stuff as it may, the big question being asked by bookmakers is what colour jacket Julia Gillard will wear at question time next Tuesday. From Sportsbet: 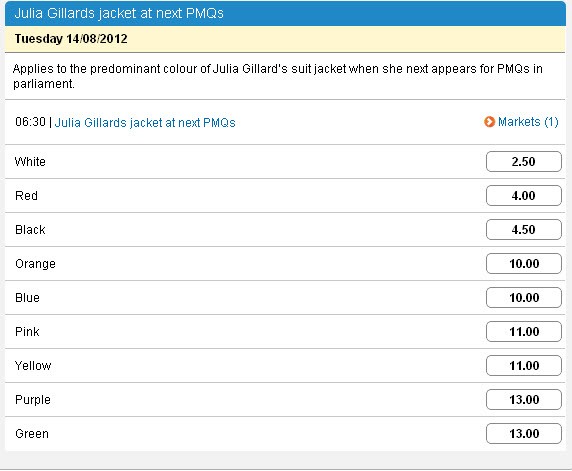 Conspiring with pariahs for greed. Don’t stand in the way of a banker out to earn a dollar or you’ll get crushed in the rush. There’s further evidence of that this morning with the news that Britain’s respectable, oh so respectable, Standard Chartered Bank has been accused by US regulators of laundering $250bn from Iran and behaving like a “rogue institution”.

In doing so, alleges New York state’s Department of Financial Services, the New York branch of the 160-year-old institution left the US financial system “vulnerable to terrorists, weapons dealers, drug kingpins and corrupt regimes” through its “flagrantly deceptive actions” between 2001 and 2010.

Reports The Independent this morning:

The regulator said that the branch of the UK-based bank had earned millions of dollars in fees by “conspiring” with the pariah Gulf state in around 60,000 “secret transactions”.

This behaviour, according to the regulator, had been purely “motivated by greed” on the part of Standard Chartered. The regulator also said it had uncovered evidence of similar schemes by Standard Chartered to conduct business with Libya, Burma and Sudan, all of which have been subject to sanction by the US.

That Standard Chartered PLC “strongly rejects the position and portrayal of facts made by the New York State Department of Financial Services: comes as no surprise. I mean to say, the company is chaired by a knight of the realm and has a code of conduct demanding “high standards of integrity and fair dealing in relation to customers, staff and regulators in the communities in which the Group operates.”

In a statement the bank says:

Standard Chartered ceased all new business with Iranian customers in any currency over five years ago.  The Group has made presentations to the DFS and other US agencies concerning the strength of its global sanctions compliance programme during the period under review and through to the present day.

The Group is engaged in ongoing discussions with the relevant US agencies. Resolution of such matters normally proceeds through a coordinated approach by such agencies.  The Group was therefore surprised to receive the order from the DFS, given that discussions with the agencies were ongoing.  We intend to discuss these matters with the DFS and to contest their position.

As with other recent serious allegations made by regulators about the pursuit by international banks of a dollar or billion, we can expect others to be involved in this Iranian scandal along with Standard Chartered. And then we can wait for what we could call the bankers’ defence – we only did it because everyone else did. 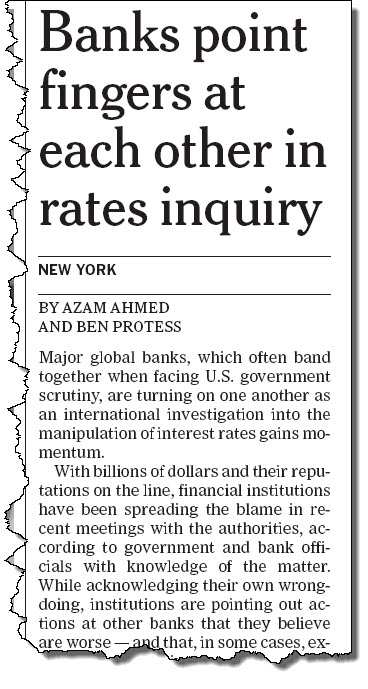 From the International Herald Tribune

The Fourth Reich of Merkel. A sign of the tensions within Europe: 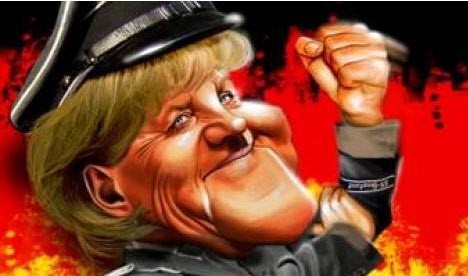 The Italian daily Il Libero illustrated how relations between Italy and Germany have reached a new low ebb with a picture of Chancellor Angela Merkel on its front page under a headline declaring the arrival of the Fourth Reich.

“The tone of the debate has turned dangerous. We must be careful that Europe does not rip itself apart,” said German foreign minister, Guido Westerwelle. He himself fanned the flames over the weekend, saying he was “categorically” against further expansion of the EU rescue machinery or bond purchases by the European Central Bank. “I can’t imagine that a majority of the Bundestag will back unlimited debt liabilities,” he said.

The politicians of sport. Sir Billy Snedden tried and did not succeed. Not only as federal leader of the Liberal Party did he not become Prime Minister but as president of the Melbourne Football Club he failed to secure a premiership despite luring back club hero Ron Barassi as coach.

Jeff Kennett showed how to make the transition from politics to sport. After being dumped as Premier of Victoria he presided over the resurrection of Hawthorn as an AFL power team.

And now it is the turn of recently retired South Australian Labor government Treasurer Kevin Foley to try and do a Kennett by taking up the poison chalice of Port Adelaide’s presidency.

Personally I think Labor should be looking for movement in the other direction and luring back a star of sporting administration to take over political leadership. Ric Charlesworth is surely the man with the credentials for the job. Coaching yet another gold medal winning hockey team in London would be an appropriate launching pad back into the House of Representatives seat he vacated so prematurely in 1993.

Is this a national humiliation or not? From the official London Olympics website this morning: 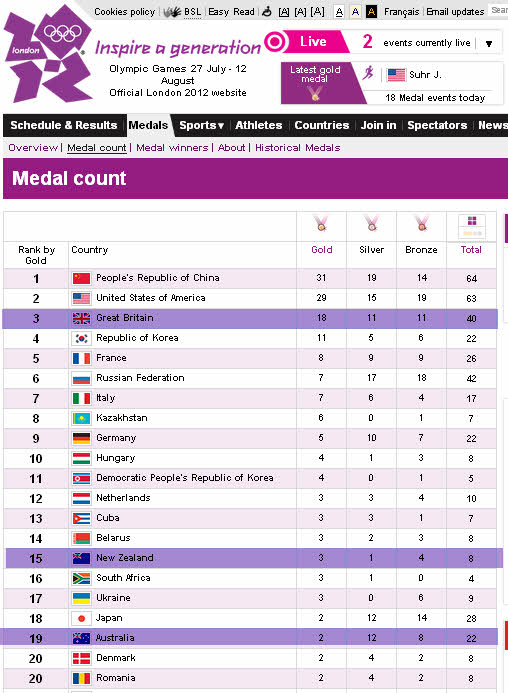 We are now even an international joke! 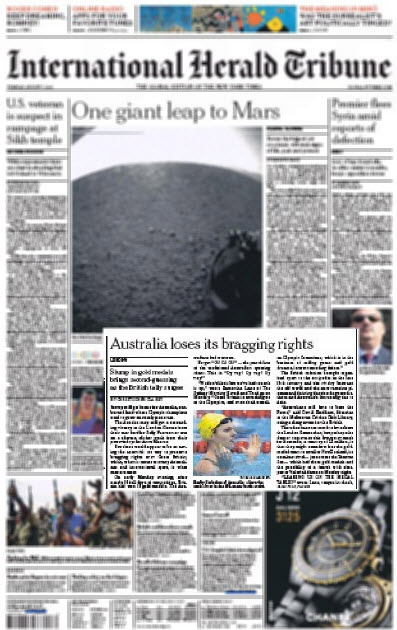 “Monti & The Fourth Reich”? Where’s a Mussolini when you need one?

Unlike most of the banking scandals, the StanChar one – if the accusations turn out to be valid – involves trade finance provided to a legitimate sovereign state. Nobody defrauded, no casinos, just banks doing what they’re supposed to do. But because the US doesn’t like countries who stand up to it, this somehow becomes Great Evil.

Ironically, because screwing the public is trivial but defying Uncle Sam is serious, the poor sods at StanChar stand more chance of ending up in jail than the actually-fraudulent banksters at Goldmans, Citi and RBS…

On the ‘medals table’: I’m not sure whether my memory is failing me or not, but when I was a kid the Olympic medal rankings were always expressed as the total number of medals, not just how many gold….