Tasmanian Labor is in the polling wilderness. Which explains why the the state government will now act on gay marriage, writes political correspondent Bruce Montgomery from Hobart.

Why is the Tasmanian Labor government about to act on gay marriage when, 15 years ago, it was just about the last in the civilised world to decriminalise s-x between consenting male adults?

Why is the Tasmanian Labor government seeking to lead the way nationally on caged hens and ending the use of sow stalls for pregnant pigs?

Why is the Tasmanian Labor government between a rock and a hard place on forestry?

The answer to all of these questions is to be found in a graph of opinion polling of Tasmania’s political parties over the past seven years. The graph shows Tasmanian Labor in the wilderness. But all is not lost. 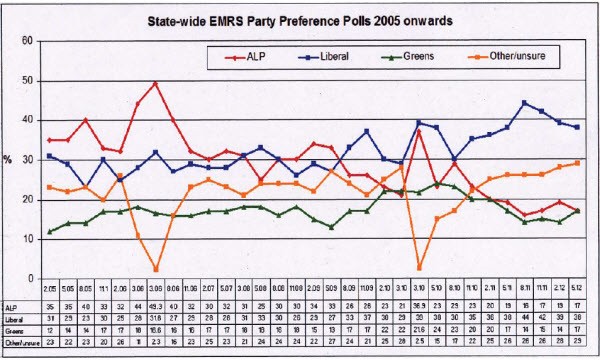 Tasmanian Labor has lost its progressive vote to the Greens while the Liberals are holding the ground of the centre-right. Tasmanians no longer know what Labor stands for. The Greens are stealing its heartland.

So we saw the move at the weekend by Labor to seek to re-establish its social progression by moving to allow gay marriage, another Green initiative. Commentators proffer the view that this is Labor seeking to distract the electorate from the ills of the economy, the continuing impasse over forestry, etc., fiddling while Rome burns, if you like. After all, they reason, this law reform is not going to go anywhere because it has to garner a majority of votes in the 15-seat upper house and that looks doubtful.

And, if it were to pass the Tasmanian Parliament, would it withstand a High Court challenge that presumably would be fought on the basis of a conflict of state and federal law and Constitutional Law 101 says that where there is such a conflict, federal law will prevail?

Meanwhile, Hobart talkback runs hot with calls of outrage from the Christian lobby.

Back to the graph. Examine the entrails. Common wisdom is that Labor will get a bath at the 2014 state election. Many go on to conclude that it means Labor will be driven from office.

It ain’t necessarily so. Without going into the intricacies of the Hare-Clark system that is used to elect the 25 members of the Tasmanian House of Assembly, let me explain what may happen.

We have five MPs in each of five electorates, elected by proportional representation, very similar to the Senate. In 2010 Hare Clark delivered what you would expect: 10 Labor, 10 Liberals and five Greens, 2:2:1 in each electorate. Labor and the Greens joined forces to form a 15-10 government.

To win majority government, a party has to win three seats in each of three electorates (and two each in the other two). That means they have to secure 49.8% of the vote in each of those three electorates. The Liberals, under leader Will Hodgman, are not getting anywhere near that level of support, particularly in southern Tasmania. They are below 40%.

What are you left with? Despite Labor’s appalling stocks, the Greens and Labor, in their combined vote, are closer to 50% than the Liberals. Between them they can see 13 seats. The Greens may be growing in support and Labor declining, but the end result is the same.

This whole social reform exercise in Tasmania is about damage minimisation, consolidating Labor’s progressive vote to shore up 13 seats with the Greens and to keep the Liberals from governing.

It is Liberals who have the bigger problem.

A few comments on Bruce Montgomery’s analysis of Tasmanian state polling and its connection (or not) to state Labor’s support for same-sex marriage. Firstly a party does not usually need “49.8%” of the primary vote in an electorate to win three seats – preferences from other parties and a high exhaust rate mean that quite often something around 46% is sufficient, although in rare cases over 50% might not do it because of leakage. Secondly, the figures Montgomery is using come from a very raw assessment of voter intent (before the unsure voter has even been asked if they have a preference) and even then EMRS records much higher “undecided” rates than other comparable pollsters. Even on the raw rate, the Liberals have exceeded Labor and the Greens combined in the last four polls. EMRS used to use the raw figure as its headline rate and were much criticised for so doing, and have now stopped. The current EMRS headline rate for the Liberals is 49% and in my view that is much more accurate (the headline figure they are now using tends to overstate the Green vote and understate Labor’s). On the May 2012 figures, the Liberals would almost certainly win majority government if an election was held now. (See http://tasmaniantimes.com/index.php/article/greenslabor-tie-is-meaningless for a detailed analysis.)

All that aside, the argument that this is about shoring up the combined Labor/Green vote does not follow anyway since same-sex marriage is an issue on which if Labor was losing votes to anyone by not taking a clear pro-reform stance, it would have been the Greens not the Liberals. A more convincing answer to the question of why Labor is generally governing in what seems to be a Green-ish manner (beyond the specific example of same-sex marriage) is simply that it is in coalition with the Greens.

Bruce, Constitutional Law 101 says that “federal law will prevail” over State law only to the extent of any conflict. As Howard effectively dealt the Feds out of same-sex marriage there is a good chance that any State law covering it will prevail if there is found not to be any conflict with Federal law. Similarly, all the blather from pollies about a “High Court challenge” will probably never amount to anything because of the same principle.

Thanx for this report, which explained a bit.