A new burst of sports spending

I notice that Kevin Gosper, the most senior Australian member of the International Olympic Committee, has already kicked the blame game along for Australia's lack of medals.

A new burst of sports spending. Perhaps Julia Gillard was astute after all in taking her week’s holiday in North Queensland rather than in London. Not that distance will enable her to escape unscathed from sporting problems. Blame for a lack of medals is sure to be attributed to government tardiness in providing sufficient funds for athletes.

I notice that Kevin Gosper, the most senior Australian member of the International Olympic Committee, has already kicked the blame game along. He told ABC Local Radio the Australian team may have won more gold if the Federal Government had not cut its allocation to the Olympic team after the 2009 Crawford review of sports funding. Sporting programs received nearly $325 million in ongoing funding in the 2010 budget, but the $52 million earmarked for Olympic-focused high-performance programs was only half what the Australian Olympic Committee had lobbied for.

“There was a suggestion that getting gold medals in the Olympic games was too costly.

“Now that really cost us. You’ve got to put money in there. That pays for coaches, it pays for international competition.

“The money is the difference between silver and gold.”

And he said the Crawford review had “set us back substantially” in the race for gold.

“The fact is you do need more money in international sports and preparing if you’re going to compete with the world.”

Stand by for another burst of spending similar to Malcolm Fraser’s when he created the Australian Institute of Sport after the dismal performance in Montreal back in 1976.

Left the sinking ship. Mark Arbib has a great sense of timing. He was federal minister for sport until he retired from that post earlier this year leaving his Canberra colleague Kate Lundy to hold the post during what looks like being the country’s worst Olympics for ages. I note that this much touted Labor tactician also retired from the Parliament.

Finding a sporting hero. With Olympic gold medals scarce, the cricket team walloped badly in its last one day series and Adam Scott bombing his winning chance in the British Open I’ve been searching for someone to celebrate as an Aussie sporting hero. So here may I present Canberra’s own Brendan Jones.

You might not have heard of him but at least he’s a winner with two titles on this year’s Japan golf tour.

No interest rate rise. The Reserve Bank Board meeting tomorrow is all over but for the afternoon tea if the market is any guide. The Crikey Interest Rate Indicator puts the probability of official rates remaining unchanged at almost 92%. 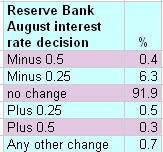 Thank goodness for the Crikey moderation policies.
Otherwise, the mere mention of Kevin Gosper’s name, may have produced a string of invective that would set the keyboard on fire.
What a tiresome, fatuous w*nker he is.

Gosper, the olympics is just the circus part of ‘bread and circuses’ – it provides no real benefit except a little entertainment. Please don’t consider lobbying for it to be held in Australia anytime in the future.

Look on the bright side. Australia is coming 8th on the overall medal count and equal 4th on the Silver medal count. Maybe we should just shift the goal posts.

At least Kevin’s comment this morning gave me a laugh!

I wonder how much we are prepared to spend per gold medal – based on the current medal tally, the going rate is $325m per medal (gold only, of course). How many primary school sports programs would that fund?

I have a better idea – lobby for AFL to be included as an olympic event: 18 gold medals right there!

“Oliver” Gosper want’s more money – with his record for self-indulgence
and nepotism?