Never set up an inquiry unless you know the outcome beforehand. That's the standard advice from public servants to ministers.

A classic report. Never set up an inquiry unless you know the outcome beforehand. That’s the standard advice from public servants to ministers. And so it has come to pass with the just released look at the Fair Work Act. The findings are almost exactly as industrial relations minister Bill Shorten would have ordered when the review was commissioned. This will become a classic case study in public administration.

Just festering along. One inquiry we are certain not to have set up by the federal government is into the circumstances surrounding some dubious financial dealings in the Australian Workers Union late last century. There are far too many people with barrows to push over the Prime Minister Julia Gillard to make that a sensible course of action.

The Oz returned to the fray this morning with a page one lead and a lengthy feature inside and, as I have written before, the story will not go away in a hurry. 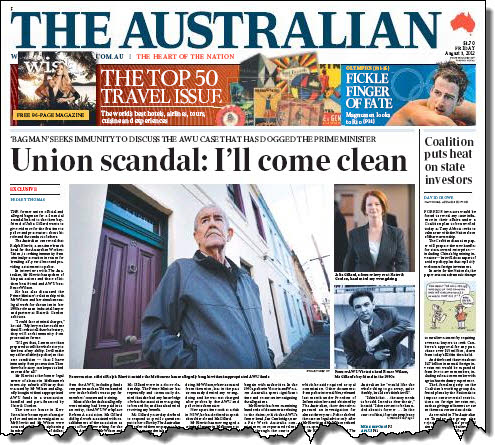 Leaving by the millions. It is not a decline in overseas visitors causing problems for the Australian tourist industry. Australian Bureau of Statistics figures show it is internationally jet-setting locals that are being missed. 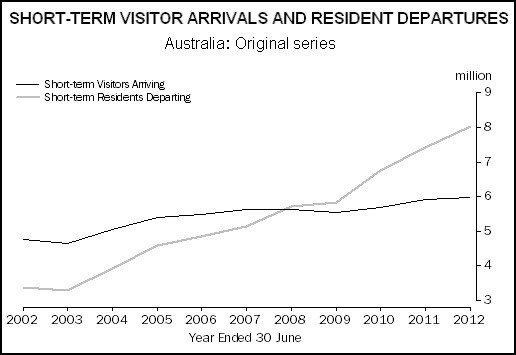 Australian residents made a record eight million short-term trips overseas in 2011-12. This is up from 7.4 million trips in 2010-2011, and more than double the numbers from ten years ago.

Short-term visitor arrivals on the other hand, recorded 6.0 million movements in 2011–12. Although the highest on record, this has remained relatively stable over recent years.

Meanwhile prosecutor Grigoris Peponis, responsible for probing economic issues, was giving a practical example of pride and dignity by beginning an investigation into whether comments by Greece’s former representative at the International Monetary Fund, suggesting he knew Greece’s bailout would fail, constituted a breach of faith against the state or the national economy was damaged and whether he should thus face criminal charges.

Panayiotis Roumeliotis, the former IMF representative, told The New York Times last month the Greek program “was impossible to be implemented.” Kathimerini  reports that aides of ex-Prime Minister George Papandreou said Roumeliotis had never expressed these qualms while in his post. Roumeliotis responded by asking Papandreou to explain whether he was aware of former IMF chief Dominique Strauss-Kahn’s reservations about the program, why Greece did not request a debt restructuring and why it accepted a high interest rate and brief adjustment period.

More on the s-x life of spiders. What is it about the reproduction activities of spiders that so fascinates scientific researchers? Yesterday I brought you the latest on how during c-pulation a breed of small male spiders are known to sever their own genitals in an attempt to plug the female, thereby gaining paternity advantage by preventing other males from mating with her. Today an update on the latest research into precopulatory s-xual cannibalism by female funnel-webs.

@Just festering along… Rather than concentrating on Julia Gillard’s distant past; its about time the Australian ran a full expose on their own dodgy owners. Some say Rupert and son and the perceived aura of criminal stench in their UK dealings would make a much more interesting read.