Once upon a time, a journo trying to squeeze a word out of James Packer's mouth would have hit a brick wall. Now the man is everywhere, as the media responds with adulation to his latest plans.

Once upon a time, perhaps when James Packer’s disastrous Las Vegas casino play was tanking, a journo trying to squeeze a word out of his mouth would have hit a permanently engaged signal. Apart from the occasional Australian Financial Review drop, hacks were limited to door-stopping the gambling king at public events and most came away with angry mutterings.

When Today Tonight and The Daily Telegraph opened fire, Packer stewed in private. But no longer. Now, the billionaire scion, with the assistance of NSW right glimmer twins Karl Bitar and Mark Arbib — and Jamie’s constantly bleeping smart phone — is out and proud, safe in the knowledge the nation’s fearless editors will shunt him the front page and as many full-page colour ads he wants to pay for.

His two major announcements this week — a $500 million pledge for some new spiv digs at his Burswood complex and a hotel and (hopefully) casino at Sydney’s Barangaroo — have been met with the kind of meta adulation reminiscent of the vibrant scribes of Tajikistan.

Crikey counted 18 pricy full-page ads planted yesterday and today in the dead tree media — in the Herald Sun (three), Daily Telegraph (three), The Australian (three) Australian Financial Review (three), Courier Mail (three) and The West Australian (three), leaving the Adelaide Advertiser and the Hobart Mercury as the only News titles not to be drenched in Packer’s largesse.

Yesterday, there was Packer holding forth on what Perth “deserves”, which mightn’t bode well for denizens concerned about that city’s dwindling cultural credibility. 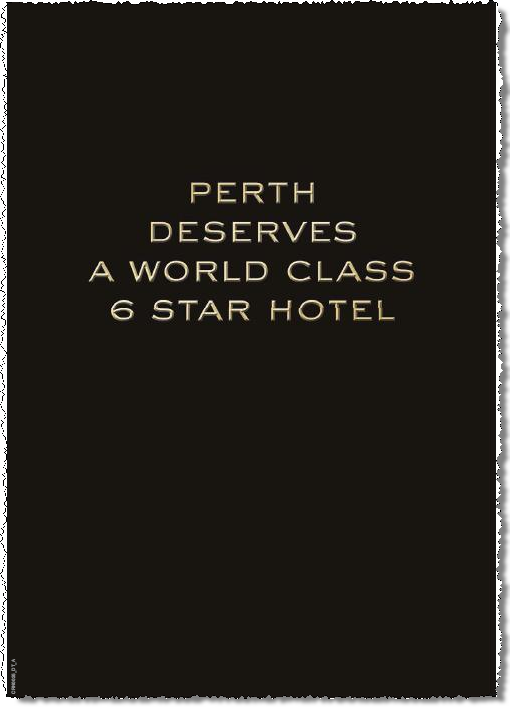 And today it was the turn of eager construction and hospo workers to cast an eye over the jobs created through the “massive boost to the tourism sector and the economy” when the Perth hotel is eventually completed in 2016.

The latest PR offensive echoes the previous bid for control of Echo Entertainment in June which also involved an epic national spray of over 20 full-pagers. And the common link-man is Arbib who was spookily hired at precisely the moment eight weeks ago that the ads started appearing.

According to industry estimates, the dual campaign would’ve meant over a million dollars landing in newspaper coffers. And with that amount of buying power (and with News about to buy his media assets), a related front-page spruik is difficult to resist.

“He can demand the front page whenever he wants it. Seriously, who’s going to say no?” one leading national PR practitioner told Crikey this morning. “He just rings people … [Ian] Smithy has sometimes been involved but these days James just jumps on the mobile.”

And then there’s the ubiquitous “sources close to Packer”, who one cynic suggested is usually Packer himself.

The Oz‘s Kitney has long been a Packer go-to-guy and yesterday’s fireside chat (Packer: “thanks for joining us today” / Kitney: “it’s a pleasure to be here”) needs to be seen to be believed. In it, Packer corrals state premiers — who he needs to grant and renew his gambling licenses — as great friends and partners, and likens Colin Barnett to a modern-day Jeff Kennett. His Master’s Voice is left free to range winsomely over his “amazing” and “spectacular” “$560 million six star” hotel redevelopment.

Over at The Fin, the more probing features filed in the past by Pam Williams have made way for a weird kind of fawning. Yesterday’s astonishing photo spread of Packer wielding his smartphone set the tone for today’s front-page drop on Crown’s $500 million hybrid issue. On today’s back page, the usually sensible Tony Boyd in Chanticleer was lauding Packer’s “triple success”, adding the ACCC’s tick-off of News’ ConsMedia takeover to the visionary hotel plans. 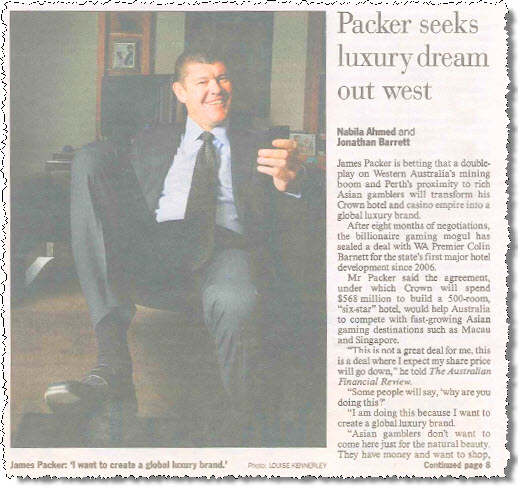 Packer, writes Boyd, “is executing a vision to create a portfolio of world-class casinos in Australia to attract the surge in Chinese high rollers and tourists”.

But in other ways the salute to greatness fits in nicely with AFR editor Michael Stutchbury’s masterplan. In his nine months in the chair the AFR has embraced an alternative reality, with morning bringing at least two pages of cooked-up calls for the Prime Minister to roll over and heed the Thatcherite 1980s-style reform calls of the business lobby.

What happens if James Packer’s Asian tourist plans turn into another expensive corporate disaster for Crown, adding to the millions lost at Ten and One.Tel? Crikey is hoping, for Australia’s sake, that the negative publicity can’t be papered over with a few full-page ads.

A $465k advertising Echo in Packer’s bid for control

Couldn’t be bothered reading an article about James Packer.
Anyone who grows rich by causing so much misery to the poor, weak and addicted in the community, doesn’t bear thinking about – let alone writing about. Horrible man!
Slow news day, Crikey!??

How is it that Karl Bitar and Mark Arbib can successfully sell Packer, who should be unsellable, yet couldn’t sell Rudd and Gillard who should be shoe ins?

As with all ads I was barely paying attention but the gushing boast list lacked a couple pertinent words ie: casino, gaming. Naturally, the word ‘gambling’ is never mentioned anywhere but even its euphemistic cousin ‘gaming’ was Missing In Action.

The ad aimed to give the impression that Crown Hotels have cachet and class. How I laughed.

In Melbourne recently the media were repeating Crowns spruiking that they put $2bil into the local economy. Why do the media buy this tripe – the reality is that Crown is a parastic industry that does nothing more than collect most of its money from the weak and desperate. If they didn’t spend it there, they could be reducing their debt, spending it elsewhere – restaurants, pubs, stuff, holidays etc etc.

What a totally bottom-feeding sleeze James Packer has become. All of Kerry’s brutal thuggery and none of his vision. And what a shame a combination of public indifference and private greed will see him succeed in dominating in his predatory activities. Australia really deserves better. @Paul: Karl and Mark couldn’t get traction for Labor while it still held a few shreds of ethics and decency. They will be much happier in their new positions, where gloves are no longer required and they can thankfully sink right to the bottom. Sad, sad, sad.