In today's Media Briefs: Most contrived culture war? A new contender ... Front Page of the Day ... China's backlash against ABC journo ... The conflict in Syria is breaking Arab news ...

Most contrived culture war? A new contender. Years ago, when The Australian was getting increasingly desperate in its war against the ABC, op-ed editor Tom Switzer ran a few stories by Paul Gray, an unctuous Christian from the Herald Sun, laying into Aunty for its secular nihilism. This was the time when Channel Ten was running Big Brother Uncut and Law and Order: SVU (“Whadda we got, Elliot?” “Netball team, s-domised and decapitated.” “A-gain?”). Gray’s objections, beyond The Chaser etc, eventually boiled down to a crime drama which centred around a married affair — proof the ABC wasn’t “family-centred”.

Switzer wisely wound the series up after that, and the record for most pathetically contrived culture war appeared destined never to be broken. But now we have a new winner, and in the same spot — Alan Oxley, in yesterday’s Oz, launching into the Greens for “vilifying” their opponents from their smug base of certainty. The evidence for this? Greens leader Christine Milne said the Australian Forestry Standard was “not credible” and “not respected”.

Anything else? No, that was it. Apparently Milne “railed” — that is, said these words — while arguing in favour of a different scheme. This is simply expressing a forthright point of view, essential to democratic debate, yes? No, according to Oxley, disagreeing with something you disagree with is, well, something more sinister. “In my opinion, the denunciation by the Greens of those who take a different path smacks of McCarthyism.”

I could quote George Brandis calling Greens Nazis, the endless talk of “greenshirts”, Julia Gillard saying Greens don’t love their families, and everything written about Lee Rhiannon, but why bother? (I could also quote an article from The Age, during the height of the late ’90s anti-capitalist wave, which said that everyone in the movement wanted a North Korean slave state. It was written by … oh, Alan Oxley.)

Really, it’s too pathetic. If this is all The Oz now has, it may be best to wrap up the war. Meanwhile, Alan, take some rescue remedy, eat some Norgen-Vaaz, watch The Notebook, and cry your eyes out — it’s going to get a lot tougher out there. — Guy Rundle

Front page of the day. More Olympics front page action as South Korean sports newspaper Ilgan Sports leads today with the anguished pictorial of distraught fencer Shin A Lam, who was controversially denied her chance to participate in the gold medal match: 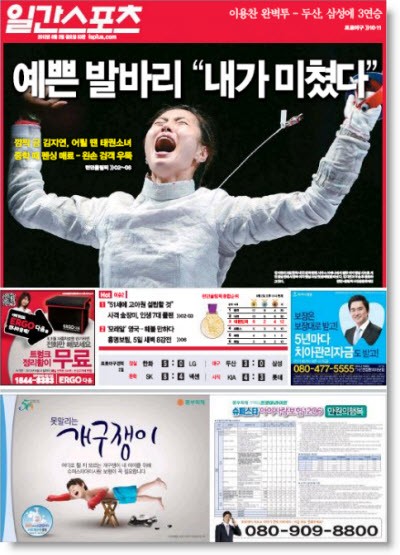 “China’s social media sites have been providing a platform for outraged nationalists seeking to vent their anger at those who’ve suggested the 16-year-old swimming sensation Ye Shiwen had taken performance enhancing drugs. Strangely, the target for much of the backlash has been an ABC journalist in London: Ben Knight.” — PM

The conflict in Syria is breaking Arab news

“Al Jazeera and Al Arabiya were founded by members of the Qatari and Saudi royal families, respectively, and their coverage of Syria faithfully reflects the political positions of their backers.” — Foreign Policy

“This week the Center for Investigative Reporting (CIR) launched the first ever YouTube channel dedicated to investigative reporting.” — Social Times

“Facebook has more than 83 million fake profiles, including millions created for users’ pets and a large number of accounts the company deems “undesirable”, it has admitted.” — The Guardian

While it is great to see fencing appear as the front page of the day, the fencer pictured does not appear to be Shin A Lam, who featured in the Epee events, while the fencer pictured was competing in the Sabre– it looks like it could be Kim Ji Yeon?

“Hypocrisy – the Ecstacy of Limited News”.